A little arthropod from the Burgess Shale cuts short the hunt for a Cambrian chelicerate
Cédric Aria
Ph.D., Royal Ontario Museum / University of Toronto
Follow
Like Liked by Zhiliang Zhang

A middle Cambrian arthropod with chelicerae and proto-book gills - Nature

Mollisonia plenovenatrix, a small predatory arthropod from the Burgess Shale dated to about 508 million years ago, is morphologically close to horseshoe crabs, which suggests chelicerates arose as micropredators early during the Cambrian explosion.

HER discovery was one of the dizzying highlights of 2012, that year when the exploratory team I was part of, along with Gabriela Mangano, Michael Streng and Robert Gaines, and led by Jean-Bernard Caron, found what came to be called the Marble Canyon fossil site, part of the famed middle Cambrian Burgess Shale. She did not yet bear her full name, which was later to include plenovenatrix, the “full-bodied huntress,”—not without affection and a zest of jocosity—but she was already Mollisonia, that lady knighted by Charles Walcott himself, in 1912, exactly a hundred years back. That name was given in reference to Mount Mollison, in Yoho National Park, itself called after the Mollison sisters, who managed the highly frequented C.P.R. hotel of the town of Field, below Mount Stephen and the Burgess Shale, between the 1890s and 1910s. As a true arthropod, Mollisonia had a segmented body, and the seven segments of her midsection spoke her name unmistakably, although, before Marble Canyon, she’d been found more than forty kilometers away, within the black rocks of the eponymous Walcott Quarry.

Her two disproportionately big eyes were looking at us, as we hovered over her fragile yet impervious body, intact for half a billion years, and she was whispering tales of strangeness with incredulously modern accents. Looking ourselves more closely, we were first struck by something exceedingly rare—in the Burgess Shale or similar fossil sites around the world—apart from the yet unrecorded preservation of limbs: masses of nervous tissues inside Mollisonia’s eyes. Not only were they impressively big, but these eyes also preserved large black spots inside them, which are generally formed by layers of carbon polymers left by compressed internal organs, following death and burial. In this case, there were no apparent alternatives; these dark patches had to be the neuropils, those dense masses of nerve cells that form the brain. Of course, these were the optic neuropils, ensuring vision. But intriguing beyond the outstanding preservation was the fact that the number of neuropils was three per eye, which is known today as a feature of certain arthropods that sit on the more outward branches of the evolutionary tree. Cambrian fossils from China had also been described years before with three optic neuropils inside each eye, but there was no reason to think that Mollisonia had any close kinship with them. More problematic of course was the lack of a real line of thought to posit Mollisonia’s kinship with any other arthropod. Sure enough, the tail end looked like a trilobite’s, but with Mollisonia’s limbs available for the first time, everything remained to be done.

Another piece of evidence had caught my attention in this specimen: Two small projections with blackened tips at the very front of the animal, in an area from which, under the influence of some providential sedimentological spirit, the head shield had been partially folded or removed. Although these protrusions formed a pair and were preserved in a fashion similar to the legs, they did not identify themselves as the expected limbs usually found at this location in Cambrian arthropods—antennae or large predatory appendages called, uncreatively, “great appendages.” They looked, however, surprisingly true to another, never before found in the Cambrian, but emblematic and of colossal evolutionary importance: chelicerae.

Chelicerae are clawed appendages ending either as pincers or as fangs. They are the signature, the escutcheon of the arthropod group to which they give their name, the chelicerates, which encompass today all spiders, mites, scorpions, harvestmen—the arachnids—, as well as horseshoe crabs. This is a massively speciose group, the majority of species being predators of other arthropods, mostly insects. The chelicerates are regarded today as one of the two main surviving branches of the arthropod tree, along with the mandibulates. Needless to say, finding the origin of that group during the Cambrian period, theatre of the “explosion” of the animal body plans, would be significant.

This had in fact been claimed before, as far back as 1988, when Derek Briggs, from the University of Bristol (now Professor at Yale), and Desmond Collins, the predecessor of Jean-Bernard Caron at the Royal Ontario Museum, published Sanctacaris uncata, the “Santa Claws” of the Burgess Shale. The animal, excavated in 1983 on Mount Stephen by a team led by Collins, boasted a head with what seemed to be as many as six pairs of appendages—a characteristic of the chelicerate body plan. Since then, Jean-Bernard and I have also re-described Habelia optata, a relative of Sanctacaris showing that these arthropods had in fact up to seven pairs of appendages in their heads; a striking complexity that appears to be the ancestral condition of chelicerates. The consequence of this evolutionary solution is that chelicerates now literally walk on their heads and use it as the central “module” (we say “tagma”) of their body. However, although the word “chelicerate” was used by Briggs and Collins, the diagnostic chelicerae had in fact been missing in both Sanctacaris and Habelia.

It took another two expeditions, in 2014 and 2016, to gather enough material on Mollisonia to undertake a more confident attempt at completing the story inspired by that very special specimen from 2012. 2014’s was by far the most ambitious and most productive of Marble Canyon operations, yielding over 10,000 fossil specimens overall, an achievement to which contributed new and motivated Burgess Shale team members, such as Karma Nanglu and Joseph Moysiuk. More abundant than at the Walcott Quarry, Mollisonia remained a rare species in these communities, totaling about 50 specimens at the end of 2016.

A long work of observation as well as fossil preparations, which came from the skillful hands of Jean-Bernard, provided us with another set of chelicerae and nothing less than an almost full complement of the remaining seven pairs of head limbs. These limbs without a doubt made Mollisonia a close relative of Sanctacaris and Habelia, while, from a strictly taxonomic perspective, the chelicerae were giving her the medal of the oldest known chelicerate. To crown this picture, limbs behind the head had this peculiar way of being assembled from several overlapping thin lobes. Nothing as such was known among Cambrian arthropods, but it certainly reminded of a simpler version of the so-called “book”-gills or -lungs of chelicerates, with their numerous collated thin sheets. Finding chelicerae was one thing, but this brought Mollisonia even closer to the modern chelicerate body plan.

In that, Mollisonia bridged an evolutionary gap. While it can be argued that Sanctacaris and her relatives had already brought the making of chelicerates within the realm of the Cambrian explosion, it became clear with these new fossils that chelicerates had more than just emerged in the aftermath of the explosion; they most probably had been a full part of it, much earlier within the Cambrian, in forms we might not suspect. If the fossil record may still hold surprises for us, what we can say, however, considering that Sanctacaris, Mollisonia and their kind were small predators roaming the sea floor, is that the first chelicerates might have used that relatively poorly exploited ecological niche to flourish at the time.

Mollisonia is therefore a creature with a formidable legacy, leading the way to horseshoe crabs and arachnids. An issue remained: these three nerve masses inside each eye that we first saw seven years ago are in fact absent in modern chelicerates, which only have two. Combined with the fossil evidence from China, this must therefore mean that the optic part of the arthropod brain evolved a complex form early, in the midst of the Cambrian explosion, before getting simplified in modern chelicerates (which instead rely on secondary eyes and other sensory devices).

And quid of the trilobite-like tail? Just like the resemblances with Sanctacaris and Habelia, Mollisonia could not hide much of her pedigree, which of course is a bonanza (or sometimes a curse) for the systematists. There are indeed reasons to think that this trilobite-like tail, called a pygidium, is the same structure as in trilobites, or at least that it is formed from the same genetic program. Hence Mollisonia brings her support to the long contended idea that the trilobite pygidium and the horseshoe crab tail plate (the thoracetron), which occurs phylogenetically very close to Mollisonia’s, have a common genetic origin. This, consequently, gives horseshoe crabs more than a superficial resemblance to trilobites.

We worked with Canadian scientific illustrator Joanna Liang to bring Mollisonia plenovenatrix to life. This is a more tedious process than one might think, for which detailed measurements are taken that do not even enter the description of the species. The process also forces us to question our judgment, as piecing together all those separate, targeted observations in our mind can be cause for an Arcimboldo. The ultimate test is to be able to look at both the fossils and the reconstruction and say: “Yes. Yes, it is you.”

Like all these fossils, Mollisonia was an adventure. From rocks to paper, I have been fortunate to live it that way, thoroughly. Long after now, perhaps through the glass of a display stand, she will still look at me, whispering her stories; staring, as if waiting for me to tell her whether I understood them. Perhaps not, but trying was the whole point.

I am interested in macroevolutionary dynamics, and especially in deterministic factors such as morpho-functional trends and constraints that shape body plan evolution. I am looking at these issues through arthropods, mainly early forms from the Cambrian Burgess Shale and Chengjiang Lagerstätten, reconstructing their morpho-anatomy and relationships, and synthesizing this information into disparity analyses and comparative phylogenetics. 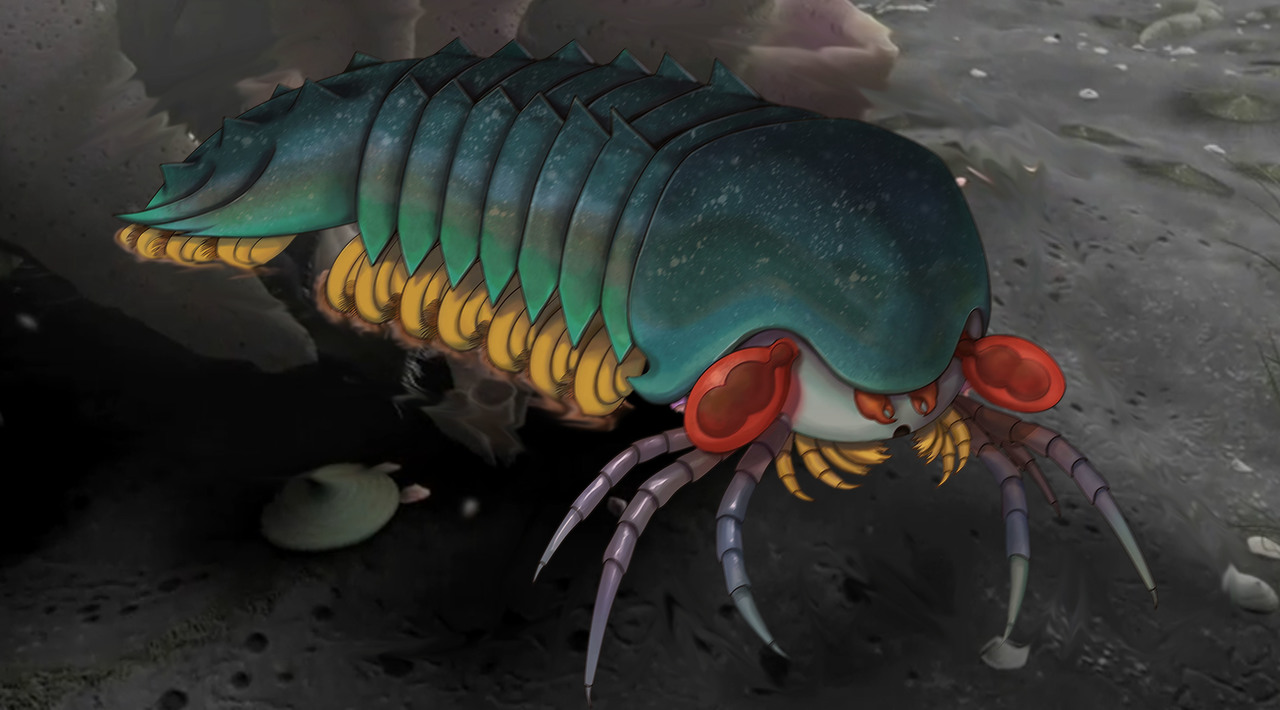