It is often believed that the idea of interconnectedness of all natural phenomena suddenly came to Humboldt's mind on the Chimborazo volcano, as a kind of revelation. “As he stood that day on Chimborazo, Humboldt absorbed what laid in front of him while his mind reached back to all the plants, rock formation and measurements he had seen and taken on the slopes of the Alps, the Pyrenees and in Tenerife. Everything that he had ever observed fell into place” (Wulf 2015). However, Humboldt’s travel diary (Humboldt 1986) provides a quite contrasting view of the reality. His experience on Chimborazo lasted less than one day and was not as rewarding as previously thought: “Unfortunately Chimborazo is the poorest in plants of all the Nevados we visited (…). In addition, a vegetation without vigour, not adapted to the beauty of this colossus.” Because of the bad weather – heavy snowfalls the night before and on the way down – Humboldt could not deploy all the measuring devices he implemented on other mountains, and Bonpland could not collect any vascular plant above 3700 m (Moret et al. 2019). The only scientific issues he discusses in his diary, as an output of his visit to Chimborazo, are about volcanism and geodetic measurements. In fact, if Humboldt ever experienced any Eureka moment about the interconnectedness of the physical and living worlds, it occurred on another mountain, three months before his ascension of Chimborazo.

From March 14 to 18, 1802, Humboldt spent four days on the slopes of the Antisana volcano, with his travel companion Aimé Bonpland, three young aristocrats from Quito and a dozen porters and servants. This expedition was at first a hard test, when arriving to a hut at an elevation of nearly 4100 m: “The first night we spent there was cruel. We stayed nearly 24 hours without food, we found only potatoes, there was no candle, the small rooms were filled with the smoke of the straw fire we used us to enlighten us. (…) The wind blew and howled like in the open sea.” (Humboldt 1986). But Humboldt was later fascinated by the landscape that surrounded the hut: large plains “covered with the most beautiful turf of alpine plants, with purple and azure flowers nicely contrasting with the dark green of the turf”, where many deer lived and bulls roamed freely. This experience marked him to such an extent that the Antisana hut, mistakenly believed by him to be “the highest inhabited place in the world”, appears on most of his representations of the tropical Andes.

Most importantly, at the very beginning of his account on Antisana, Humboldt wrote a programmatic note that is unparalleled throughout the rest of his journal (Humboldt 1986). To the narrowly quantitative method of his predecessors of the French Geodesic Mission, which, he wrote, "only made measurements", he opposed his own: in one word, "Causes", i.e. a search for causality. He continued as follows: “I set myself the goal, when entering the province of Quito, to visit the great Nevados one after the other, to do mineralogical research, to collect alpine plants, to analyse the atmospheric air at a great height, to observe the magnetic tilt... I started with Antisana. This expedition succeeded much more than I dared to hope. We collected an immense quantity of plants as beautiful as new (…).” In this text written just after his return from Antisana, Humboldt provided the key to what was later called "Humboldtian science" (Nicolson 1987) for the first time: a holistic, data-intensive project based on a wide range of measurements and observations of any kind, intended to highlight the complex causal links between biotic and abiotic phenomena. It was on the Antisana that Humboldt could put this project into practice, thanks to a longer stay and better weather than during his attempts on the Puracé, the Cotopaxi and the Chimborazo.

It was on Mt. Antisana that most of the alpine plants reported in Humboldt’s publications, in particular his famous Tableau physique, were collected. This is the reason why our team, formed by Ecuadorian and French botanists and ecologists, returned to Antisana in 2017 to resurvey the vegetation on that mountain and to compare the current distribution of plants with Humboldt’s original observations (Moret et al. 2019). From the hut where Humboldt and his companions endured a “cruel night”, still preserved with its hatched roof and adobe walls, we followed their route, and rediscovered the cave at 4860 m where they stopped to collect plants. The resurvey showed that the highest living plants are at altitudes 215-266 meters higher than in the early 1800s, consistent with upslope range shifts observed worldwide.

The “Humboldtian” fortune of Antisana did not end with Humboldt’s expedition. Almost all scientists interested in the geology or the natural history of the tropical Andes who travelled to Ecuador in the 19th century (e.g. Boussingault, Hall, Jiménez de la Espada, Reiss, Stübel, Whymper, Meyer) went to Antisana. Most remarkably, in 1845, Carlos Aguirre Montúfar, a nephew of one of Humboldt’s field companions in 1802, recorded temperature, rainfall and barometric pressure for a whole year at the Antisana hut (4060 m), which is the first weather monitoring programme ever performed on a tropical mountain (Farrona et al. 2016).

Today, after a period of oblivion during the first part of the 20th century, Antisana once again occupies a prominent place on the scientific scene, as it is scrutinized through the lens of climate change. In a true Humboldtian spirit, climate scientists, glaciologists, hydrologists, botanists, entomologists and ecologists have teamed up to set up environmental monitoring and research programs at Mt Antisana, to better understand the dynamics of tropical glacier retreat and assess its consequences for biodiversity and water provision (Jacobsen et al. 2012, Rabatel et al. 2013, Heredia et al. 2018), and to monitor the impact of climate change on plants (Cuesta et al. 2017, Sklenář et al. 2016) and insects (Gobbi et al. 2018). So, let us give credit where credit is due and associate the memory of Humboldt to Mt Antisana. There are no concerns that “colossus” Chimborazo will be angry: it will keep most of its glory as the world's highest peak (Rosenberg, 2016)!

Acknowledgements: Olivier Dangles wrote this post with me. The botanical resurvey of Antisana was conducted by Priscilla Muriel and Ricardo Jaramillo. I warmly thank Heinz Peter Brogiato for providing access to the Hans Meyer archive at the Leibniz Geographical Institute, Leipzig.

Nicolson M. (1987) Alexander von Humboldt, Humboldtian Science and the Origin of the Study of Vegetation. History of Science 25: 167–194.

Rabatel A., Francou B., Soruco A. et al. (2013) Current state of glaciers in the tropical Andes: a multi-century perspective on glacier evolution and climate change. The Cryosphere 7:81–102.

Rosenberg E. (2016) The Mountain That Tops Everest (Because the Earth Is Fat), New York Times, 16 may, https://www.nytimes.com/2016/05/17/world/what-in-the-world/the-mountain-that-tops-everest-because-the-earth-is-fat.html

Ruth Milne
about 3 years ago

What a great story, thank you for sharing! It's looks cold by the Antisana cave... 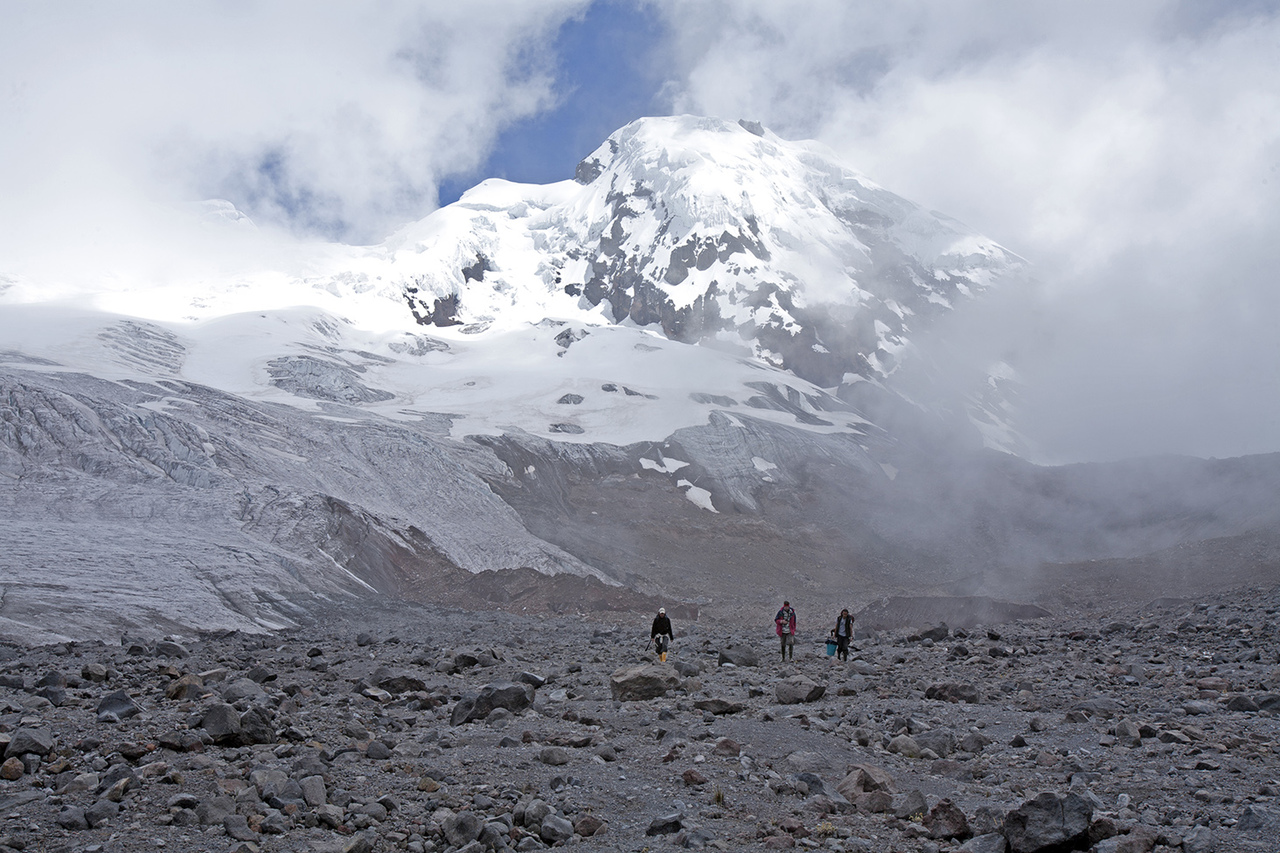