One story behind our recent paper, brought together by the dedicated – and binational – efforts of Lakehead University (Canadian) Masters student Douglas MacNearney and Escuela Superior Politécnica de Chimborazo (Ecuador) undergraduate student Carlos Siavichay, starts in 2005. After my own first year as Assistant Professor at Lakehead University, I was looking for something “new” in research and found the vicuña in Ecuador an intriguing subject, given my background in population dynamics of introduced herbivores and my interest in animal behaviour.

Vicuñas occur as free-ranging camelids in high-elevation grasslands of the Andes, making them easy to observe from great distances. In 2005, there were 2,500 vicuñas in approximately 10,000 ha of habitat in the Chimborazo Faunal Production Reserve, an expanded protected area around the volcano peak that stirred Alexander von Humboldt in 1802. The Ecuadorian government created the reserve in order to receive vicuñas from three source populations in 1988 and 1993. Steadily increasing in number, vicuñas co-existed from the outset with local livestock, including their own domesticated form, the alpaca, but mostly sheep and cows. Small-scale ranching is common in many of the world’s protected areas, given that traditional use that predates protection of even what many consider “wilderness.”

Vicuñas occupy a narrow band of habitat that lies approximately between homesteads on private land in the lower páramo and the boundary of the original mountain reserve.

On my very first visit to Ecuador, Environment Ministry officials were asking me at what point the vicuña population would reach carrying capacity and whether studies I could launch to answer this question would also be able to show the need to create new laws to take the ranchers off the Reserve. This context led to the paper that aimed to predict how vicuña behaviour varies with the presence of livestock. If you read the paper, you’ll find the question isn’t answered yet, given the variation in context that occurs even over a small habitat area in Chimborazo. This is the same variation, of course, that inspired Humboldt. I’m now inspired to continue to explore the fascinating research questions related to foraging ecology and plant-soil feedback in the páramo ecosystems of Chimborazo. Vicuñas now number over 7,000.

The more interesting story dates back further and is tied to Humboldt’s 1810 painting "Le Chimborazo vu depuis le Plateau de Tapia." He chose to paint camelids, presumably vicuñas, into the scene where they almost certainly did not exist at the time. The painting creates ambiguity on the question of whether and when camelids were introduced or reintroduced to Chimborazo. If they are not in their native habitat, conflict between ranchers and the Environment Ministry could be heightened.

Part of this older story, and some clarity on the place for the vicuña in Ecuador, comes from investigations by Yale University anthropologist, Richard Burger, and University of Victoria (Canadian) zoo-archaeologist, Peter Stahl. About 1800 BC, in what is today northern Ecuador, two major earthquakes rendered agriculture difficult, if it even existed, in the intermontane valleys of the Ecuadorian Andes. Then, by 300 BC to 100 AD, domesticated camelids appear in coastal Ecuador and the Andes, and actually dominate fauna at Pirincay, near modern-day Cuenca.

Incan army encampments reporting to the Empire in modern-day Peru reached as far north as southern Colombia by around 1463 AD, and there exist the remains of one camp near the peak of Chimborazo. Domesticated camelids and vicuñas followed the Incans, animals introduced to new settlements as a key part of the Incan culture and others before it. One of the best-known Spanish conquistadors, Pedro Cieza de Léon, clears some mystery by including in Crónicas del Perú that “…encountering camelids in corrals was common along the Incan Highway. In reference to Chimborazo, the higher and snowy elevations were home to wild mountain forms, whereas near Tapia (modern-day Riobamba) were domestic forms.” He continues; “…Traditionally, hunting of the wild forms was prohibited, but several were sacrificed to appease Chimborazo and prevent frosts. Illegal hunting and habitat deterioration due to the arrival of sheep led to population declines and devaluation of remaining camelids. The Spanish began indiscriminate killing, consuming only the hearts. By 1582 camelids were absent from the area.”

So, vicuñas were reintroduced into Ecuador by the Ecuadorian Institute for Forests, Protected Areas and Wildlife, INEFAN – in 1988 and as a part of a valiant effort to bring the animal to least concern for extinction. Hindsight has the current government accept the fact that there was not enough consultation with local people when vicuñas came to Chimborazo. As Gabriela Lichtenstein of the Argentinian National Institute of Latin American Anthropology and Thought reminds us, there is good potential in the marketing and sale of fibre from the vicuña to resurrect a high-end fashion industry, but locals who harvest fibre in other parts of its range, re-enacting rituals of the Incas as a tourist attraction, have not to date seen an equitable distribution of the wealth.

The place for vicuñas in society was historically the same as it is today – fibre is used for ornamentation - but other rituals (like bloodletting) were also once associated with the wealthy. Re-enactments like this one at Pampa Galeras National Reserve in Perú have taken place for over 35 years.

In reflecting on this story over the years, and in conversing with locals in the area where I might one day contribute to understanding the interactions between vicuñas and livestock, I have this conclusion. I will use the concept of “imaginaries,” as does National University of Chimborazo political scientist Luis Alberto Tuaza. Just as Humboldt painted imaginary vicuñas into his work, the discourses and rituals associated with the vicuña lead us to the images that are deliberately created by social agents, in the most recent case, the government responsible for bringing in an animal at the brink of extinction as part of a valiant conservation effort. Viewed the way locals view them, vicuñas brought intentionally to Chimborazo are different only by distance from source when they look at the more easily managed livestock brought from Europe by the Spanish. This viewpoint is consistent with the Andean cosmovisión, and is a perspective on nature and reality common to Indigenous peoples.

The Chimborazo Faunal Production Reserve has seen change, and will continue to do so, as the grasslands warm and the glaciers melt. Now, the important questions will be on managing wildlife together with livestock. What matters is how we understand this reality, and how we separate, or benefit from, the imaginaries. 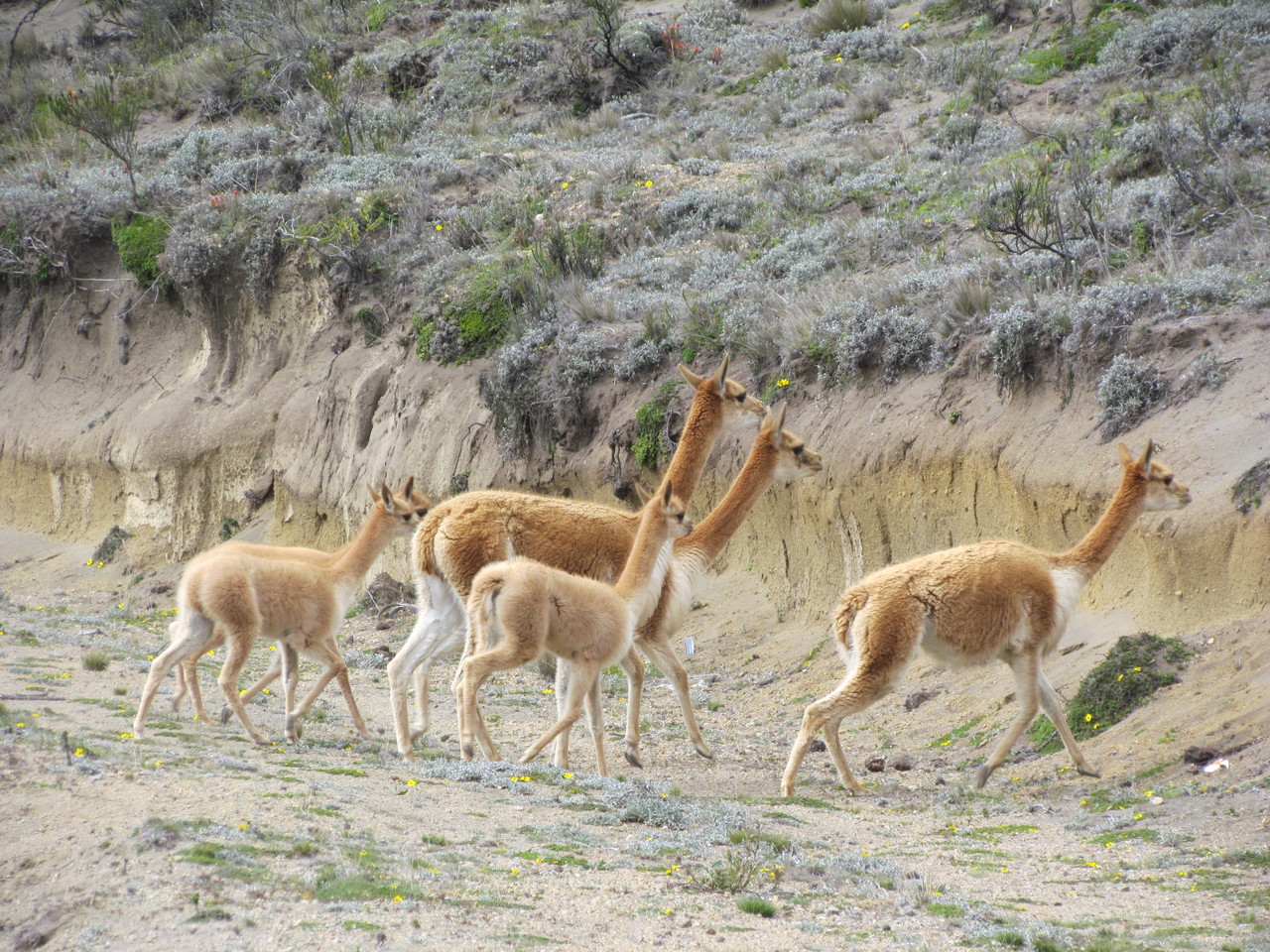