Nowadays, the climate impact on the political, economic, and cultural aspects of human society is an indisputable fact. However, in the historic and prehistoric period, whether and how climate change can affect human society, culture and civilization has been a long-term debate in the fields of natural sciences and social sciences for nearly decades years.

In historic and prehistoric period, whether or how climate change can affect the evolution of human culture and civilization has been a long-term debate in the fields of natural science and social science for nearly a hundred years. It has been understood the relationship between climate change and social development in the Holocene (since the last 10,000 years) mainly in three aspects: (1) catastrophic climate events, such as floods, droughts, earthquakes, volcanoes, ice-drift events, have major impacts on human activities; (2) cyclic climate change: the decadal to centennial periodic climate oscillations may be related to the development of human society such as nomadic migration, population change, frequency of wars, and succession of dynasties; 3) social resilience: The sensitivity of archaeological culture to climate events or cyclical climate pressure. The process, rule and mechanism of cyclical climate change has many advantages in forecasting and early warning, which is one of the focus fields in scientific studies in recent years.

As early as 1991, Prof. Houyuan Lu discovered that the southward migration of nomadic culture was related to the cold and dry climate in East Asia [Lu H. The cultural and climatic changes of grassland in north temperate zone since Neolithic age. Science of Conservation and Archaeology3, 41-50 (1991). In Chinese: 新石器以来的北温带草原文化与气候变迁，文物保护与考古科学]. However, this study has not attracted widespread attention due to the lack of reliable dating and proxies of climate and human activity.

Recent years, the emergence of high-resolution paleoclimate and human activity records has provided an opportunity for us to conduct more in-depth studies. Thus, we have sampled and collected data over more than 11 years. We drilled the cores of Maar Lake Xiaolongwan in 2006. The collection of archaeological 14C dates began in 2010. The pollen data were identified and analyzed from 2011 to 2016. Everything we do is to better understand the relationship between climate change and human activities.

We have found synchronous ~500-year cyclic changes in monsoon climate and prehistoric human activities over the 8000 years in Northeast Asia. The warm-humid phases of monsoon cycles correspond closely to the intensification of human activity and the flourishing of prehistoric cultures. Six prosperous phases of Neolithic and Bronze Age cultures correspond approximately to warm-humid phases caused by a strengthened East Asian summer monsoon (EASM), except for the first expansion of the Hongshan culture, which corresponds to the phase of the strongest EASM in the middle Holocene. This ~500-year cyclicity in the monsoon and thus environmental change triggered the development of prehistoric cultures in Northeast Asia. 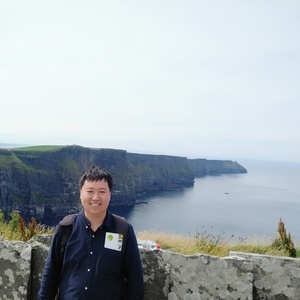