Today I joined millions of others around the world in attending my local climate strike.
Patrick Goymer
Chief Editor, Nature Ecology & Evolution
Follow
Like Liked by Simon Harold and 4 others

Like many scientists, I have come to the conclusion that just being involved in research or the communication of science is not enough – this needs to be done in tandem with vocal activism. If you need any more persuasion on why things are now so critical, take a look at some of the figures here.

My local event happened to be in Ipswich, a relatively large town about 100km from London. It was a modest but lively affair, a few hundred people by my estimate. While a range of ages were present, with a strong contingent of the retired, the event was led by and very much about the children and young adults.

Despite that, we did start off with a speech from the local MP, Sandy Martin of Labour. I’d had a rather frustrating chat with him just beforehand in which he had dismissed my interest in talking about the science on the basis that it was all sorted and it’s just politics that matters now. He even rather condescendingly tried to explain Galileo to me without really bothering to find out that I might know a bit about that sort of thing already. Of course, I know exactly what he was trying to say, which is let’s not give the denialists any chance of reopening debate about the science of global warming, but it does pose a challenge to scientists trying to get involved. What I wanted to talk about is what science tells us about solutions to the crisis, but that is not how he viewed it. If there had been an opportunity, I might have tried to say something along these lines to the crowd, but it wasn’t the appropriate occasion. I’ll leave what I might have said for another post here.

Having been frustrated by this conversation, I wasn’t too saddened to witness him being heckled considerably as he tried to speak. Some of this was the accusation of talking the talk but not walking the walk, but a lot of it was to do with a specific local issue of a proposed new bypass for Ipswich. Without getting into the details, he is in favour and argues that it will allow more sustainable homes to be built in the town rather than in the more inaccessible countryside, and he says that we can make sure it is mostly used by electric vehicles. The counterargument is that you are just building more roads that realistically will just be filled with more non-electric cars. While I understand the need to build infrastructure to make our urban living more sustainable, I am pretty sceptical that building bypasses is going to do anything more than allow more cars on the road and set a dangerous precedent for other towns. But I digress. I should definitely note that on the wider climate issue, what he said was all very reasonable, and I feel a bit bad for singling him out for criticism.

The more interesting part of the event was hearing some short impassioned speeches from the young people, who balanced their anger with a good degree of hope. They told us about the personal actions they are currently taking to help alleviate the crisis (their food, transport and lifestyle choices), and their hopes for how they will use their adult lives to make a difference (one speaker intends to become an environmental scientist). There were also speeches from a local energy consultant proposing a renewable energy cooperative for the town, an experienced activist asking us to reclaim the streets from vehicles, and a trade unionist calling for more collective action. In between these speeches, we headed around the town centre marching and chanting. The bystanders were mostly supportive, with a good few waves and cheers, even if some looked a bit bemused or condescending, and I did witness one incident of someone throwing a milkshake at the march. Eventually, on about the fourth or fifth march round, we’d dispersed so much and I was the only older person left, so I called it a day and headed for home (by bike, of course).

Was it all worth it? Yes, absolutely. On a personal level, I’ve not felt this optimistic for a long time. It’s great to see the number of people taking to the streets globally, and I think it’s really important to show that it’s not just in the big cities, but in the smaller towns too. And of course, inspired by Greta Thunberg, it's so good to see the youth taking the lead. Will it actually achieve enough? I’m sure that like many I will spend the next few years swinging back and forth between despair and hope, but today at least is a hopeful day. 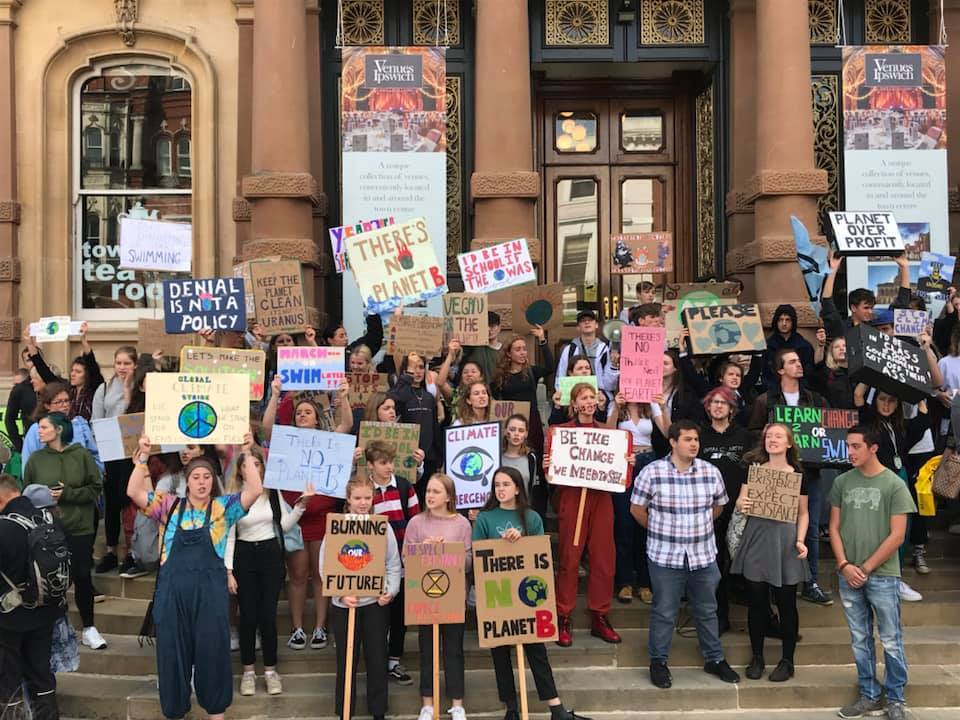 Today I joined millions of others around the world in attending my local climate strike.