Exploring the dinosaur graveyards of the Eastern Cape

A chance discovery by a local shepherd has lead to a major scientific research program involving palaeontologists from South Africa, the UK and the US in the Karoo Basin. The area is proving to be one of the richest localities for vertebrate fossils in South Africa.
David Paul Ford
Research Fellow, The University of the Witwatersrand
Follow
Like Liked by Ben Johnson and 5 others
0

In 2017, a shepherd from Qhemegha, a small village in the Eastern Cape Province of South Africa, just a few kilometres south of the Lesotho border, came across a number of large bones protruding from the pale red mudstones exposed by the dongas that cut into the broad, flat velt. Two years later, a team of palaeontologists, lead by Professor Jonah Choinière of the University of the Witwatersrand, have just completed their second field season exploring and excavating in and around the village, where their main difficulty has been in deciding on which of the numerous potential quarries to focus manpower. Quite simply, there are bones everywhere.

We are in the lower Elliot Formation of the Stormberg Group (Karoo Supergroup), South Africa. Analysis of zircon crystals from volcanic eruptions collected from these rock layers during previous fieldwork has dated the strata to around 220 million years before present, in the Norian of the Upper Triassic. In this period of earth’s history dinosaurs were vying for terrestrial supremacy with other archosaurs, more closely related to crocodiles, and cynodonts and dicynodonts were the most numerous representatives of the mammal-line. Vertebrate discoveries in this period of South African heritage, however, are rare, with only four sauropodomorph dinosaur species and fragmentary remains of pseudosuchian archosaurs (informally called ‘rauisuchians’) known from over a century of sampling the lower Elliot. Over the coming years Prof. Choinière and his team plan to revolutionise our understanding of the diversity of life and dynamics of evolution in southern Gondwana during this critical period of the Mesozoic.

But first, to work. Two massive plaster jackets, 2 metres in length and partially prepared last year, lie on pedestals of rock in the dongas to the south-west of the village. We set about strengthening the plaster and burlap protective coats, a messy business, and further undercutting the jackets, reducing the pedestals. We then need to flip the jackets over, ripping them from their pedestals, complete the jacketing, and get them safely onto a flat bed truck for transport back to the custom-built prep labs in the University of the Witwatersrand, Johannesburg, 700 km distant. They weigh almost 2 tonnes each and contain fragile fossils.

We use a JCB digger to make a road from the village plateau to the donga, and (very) carefully flip the jackets over using the large excavator bucket. A day or so later we hoist the jackets into the same bucket, carry them up to the plateau, where a flat-bed with crane takes over. Easy really. Although, of course, it wasn’t. Each jacket contains the remains of large vertebrates. One almost certainly a virtually complete sauropodomorph, the other a mixture of several different taxa, including a dicynodont. We won’t know exactly what we have until the preparators at Wits slowly reveal the bones inside. Work there has already begun.

Over the next 10 days, we send our teams to prospect for new sites and work on existing quarries. The days are long (breakfast at 0630, in the field from 0800 until 1700) dusty and hot, but the results are worth it. By the end of our stay we have started three new quarries: an new sauropodomorph, an unidentified carnivore, and a mass bone site, containing the remains of rauisuchians and dinosaurs, including what is potentially a very rare neotheropod femur, some 40cms in length. This probably represents the oldest carnivorous dinosaur known in South Africa, and we haven’t even fully excavated the quarry yet. Conservatively, we estimate that we have, so far, doubled the known diversity of vertebrates in the lower Elliot, and much work remains to be done.

The Qhemegha Project is an international effort, with several South African (Witwatersrand, the National Museum in Bloemfontein, University of Capetown), UK (Universities of Oxford, Birmingham and the NHM) and US (University of Arkansas) institutions involved in bringing their expertise and knowledge to this remote area of the Karoo. Yet none of this would be possible without the support and goodwill of the people of Qhemegha and the municipal authorities of the Province, who have embraced the project as part of the heritage of the Eastern Cape. Above all, we thank them for their invaluable help and friendship, which is and will be crucial in revealing the remarkable details of life and death on the flood plains of southern Africa over 220 million years ago.

David Paul Ford
Research Fellow, The University of the Witwatersrand
Follow
My research focuses on the systematics and comparative anatomy of Palaeozoic tetrapods, using μCT data to reveal novel anatomical detail and address deep divergences in vertebrate evolution using phylogenetic methods. I also get involved in dinosaur palaeobiology from time to time. I'm currently working on the enigmatic early lepidosauromorph Paliguana whitei, as part of my research at the University of the Witwatersrand. 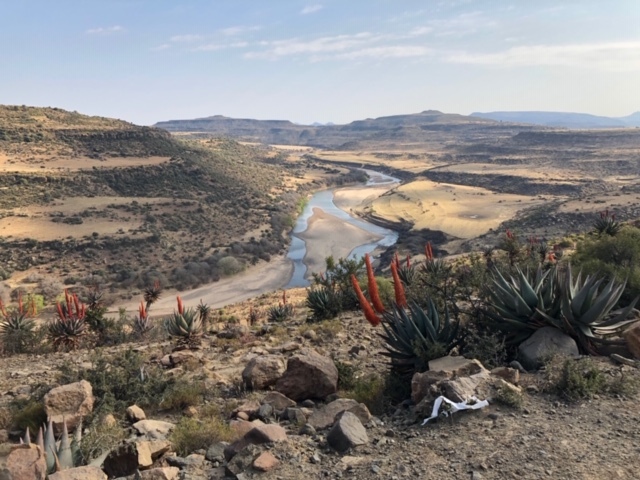 Exploring the dinosaur graveyards of the Eastern Cape

A chance discovery by a local shepherd has lead to a major scientific research program involving palaeontologists from South Africa, the UK and the US in the Karoo Basin. The area is proving to be one of the richest localities for vertebrate fossils in South Africa.