The sexual life of social insects (all ants and several wasp and bee species) is extraordinary. Queens typically complete all their mating activities on a single day early in their adult life. They embark on a mating flight to be inseminated by one or multiple male partners, then store some fraction of the sperm they acquired in a special sac-shaped organ, and will never re-mate again. They keep these sperm alive and use them prudently to produce up to millions of offspring throughout their life, which can in some cases last three decades. This would be analogous to a human female being constantly ‘pregnant’ with the yet unused sperm of male partners she has never met again for decades.

These unique sexual adaptations have raised many scientific questions. How can sperm survive at ambient temperatures for such a long time and still function perfectly to produce normally-developing offspring, while human sperm needs to be cryopreserved in specialized sperm banks to remain viable for in vitro fertilization? What kinds of conflicts arise within and between the sexes when males only have a single opportunity to pass on their genes, after which they die to merely survive as stored sperm? Can they always ‘assume’ a queen actually added their sperm in permanent storage rather than discarding it? Are the sperm of different males battling inside the queen to win a race for storage, and is the queen able to select the best sperm? Natural selection should have shaped many of these traits – a scenario that evolutionary biologists often like to think about in terms of an arms race between the sexes.

These were the type of questions that my Ph.D. advisors Prof. Koos Boomsma at the Centre for Social Evolution (University of Copenhagen) and Prof. Boris Baer at the Centre for Integrative Bee Research (at that time at the University of Western Australia and now at the University of California, Riverside) were trying to answer when I started my doctoral studies. I was mostly working on reproductive conflicts in attine ants that farm fungus for food in the Panamanian Neotropics, spending about a month every year at the Smithsonian Tropical Research Institute in Panama to do my field-work. It was during these field campaigns that PhDs and postdocs of the two research groups joined forces to work on joint research projects. By then, Boris had also done innovative work on the sexual adaptations of honeybees and built a lab specialized in the proteomic characterization of reproductive fluids. Because Danish PhD students are expected to spend some months in another lab abroad, it felt natural for me to join Boris’ group for four months to work on seminal fluid proteomics of fungus-growing ants. This is what I ended up doing, but a fortunate coincidence of already available data, tentative conceptual interpretations, and further imagination on how to follow up, gave rise to the study we just published in eLife that originally was not part of the plan.

During the months before leaving for Australia, I had followed two specialized courses on the analysis of transcriptomic data. It just so happened that Boris had such a dataset waiting to be analyzed, because his postdoc Mat Welch had recently left his lab to work in the beekeeping industry. Boris offered that I could take the lead on the project aiming to assess whether the seminal fluid of drones could trigger neurophysiological changes in honeybee queens. I was excited to give this a try just before leaving for Perth. It was not long after I arrived in Australia that I realized that the expression of genes related to visual processes in the queen brain was altered after queens were artificially inseminated, even if they had only been given seminal fluid without any sperm. It was at that point that we started reasoning this could perhaps represent a manipulative effect of male ejaculates to inhibit queen tendencies to embark on yet another mating flight. Multiple flights is something honeybee queens regularly do, but that habit is unknown for any other social insect, so we realized that such a putative manipulative conflict could only have evolved in honeybees. We thus decided to do further tests – the first of them was finding out whether the gene-expression changes in the queen brain truly translated into a reduction of her visual abilities.

As luck would have it, the lab next-door had Drs. Jan Hemmi and Yuri Ogawa as experts in measuring insect vision, and a student, Julia Görner, about to join Boris’ lab for her Honours thesis was excited to participate in the project. After some weeks of hard work, we were very pleased to see that our gene expression predictions were met because we could clearly measure a reduction in queen visual perception after queens were artificially inseminated with just seminal fluid. At that point Koos, Boris and I agreed that the hypothetical scenario matching our data was one in which the optimal diversity of stored sperm may well be something like 20 drones, but that half of that is close enough for the ca. 10 drones that inseminated a queen on her first flight not wanting their paternity share be reduced to 50% even when compromising queen eyesight incurs some risk of her trying and dying. Would natural selection have produced seminal fluid compounds to mediate such an expression of sexual conflict over promiscuity?

The next step was facilitated by Boris’s group just having developed an RFID-tag-based system to quantify the flight performance of honeybees. The system works like the scanner and barcode tags at a supermarket’s cashier and allows monitoring when queens leave and return to their hives on mating flights. We wanted to know if queens were indeed handicapped by the decline in vision during their next mating flights. Barbara Baer-Imhoof led this experiment and we were once more positively surprised by the clear results - queens were more likely to get lost when they had received seminal fluid relative to a control saline solution. One queen even returned to the wrong hive, in line with her reduced visual abilities. The seminal-fluid-inseminated queens also conducted their flights sooner, which may well represent an arms race counter-adaptation if they are aware that their vision worsens over time and flying earlier means they are more likely to successfully complete their mating activities.

This study ended up being a beautiful example of how curiosity-driven science can generate questions too wild for a grant application and too complicated to answer unless the right people are somehow at the right place at the right time. I feel very privileged to have been the pivotal student who made this work thanks to a brilliant and highly supportive group of scientists, advisors and friends, who helped me develop this successful interdisciplinary teamwork.

Cover image: A queen honeybee (large bee near centre), with a radio-frequency identification tag mounted on its thorax, while resting among workers. Image credit: Barbara Baer-Imhoof (CC BY 4.0) 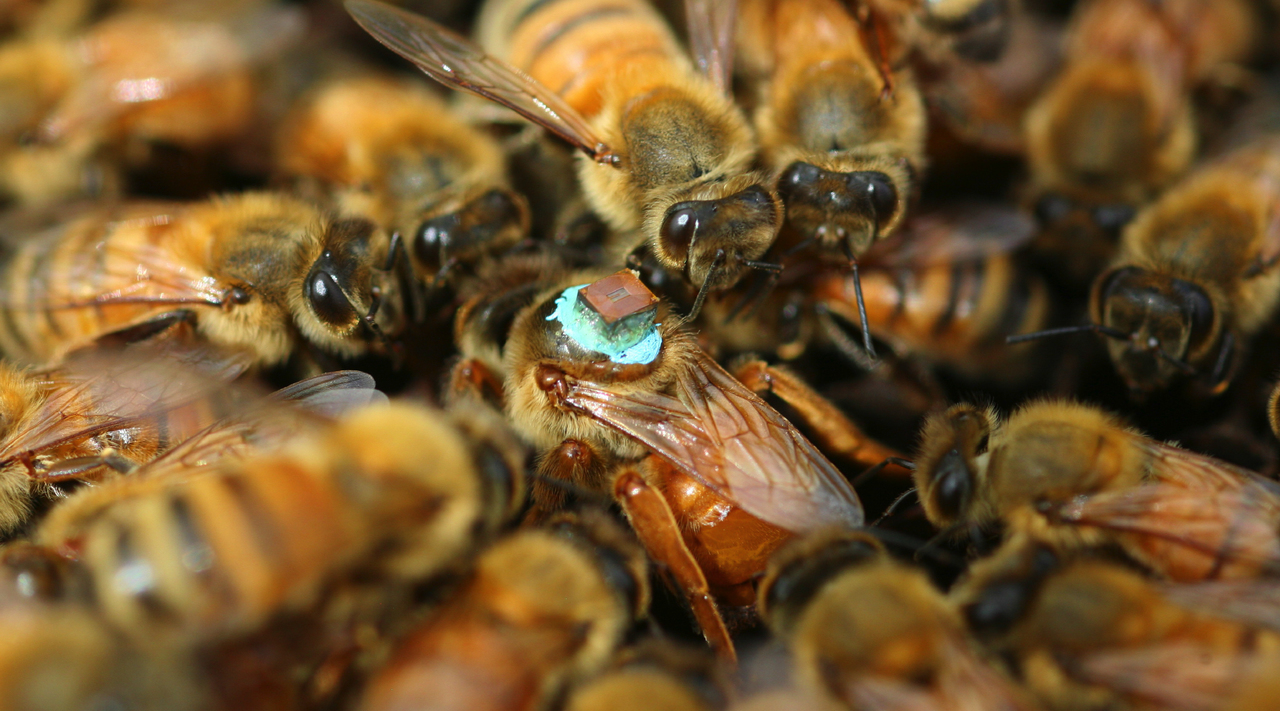