Global heating threats to coral reefs have received significant attention in the literature and media. In a new study across the Pacific Ocean, we show widespread cooling of reefs by internal waves – a ubiquitous process reducing heating accumulation in potential refuge habitats.
Alex S.J. Wyatt
Assistant Professor, The Hong Kong University of Science and Technology
Follow
Liked by Ruth Milne and 2 others

Internal waves can relieve coral reef heat stress, according to an analysis that isolates the effect at different depths using a compilation of high-resolution temperature records.

Recent studies have demonstrated marked declines in coral reefs due to widespread coral bleaching linked to global heating and El Niño events.  However, most assessments to date have focused on very shallow near-surface coral communities and heating calculated from satellite estimates of sea-surface temperatures (SST). Satellite observations are important because coral reefs exist over very large areas of the tropical oceans, where it can be very difficult and costly to gather data in the field.  However, satellites are only able to detect temperature at the very surface of the ocean and provide averages over relatively large scales.  Corals themselves live at depths from just below the surface to at least 100 m depth in many locations, but local conditions across these depths, and especially changes in conditions at depth through time, are mostly unknown.

This study was motivated by our observations of patterns in bleaching-related coral death across depths at several sites associated with the large 2015-2016 El Niño.  We recognised that zones where corals live in very shallow water, for example to 3 m depth, represent only a tiny fraction of overall reef habitats, and therefore that SST might offer a relatively limited description of the thermal environment experienced by the majority of corals that live at greater depths. While coral bleaching has been increasing in many locations worldwide, patterns of occurrence can be very difficult to predict, especially across water depths.  With this motivation, we set about gathering long-term, reef-level temperature data across a broad range of depths, from the sea surface to as deep as 50 m. Our aim was to understand the thermal environment experienced by corals across a broad range of reef habitats, and to consider how these temperatures directly measured at depth relate to the satellite SST estimates that are routinely used for coral bleaching predictions.  We were particularly interested in measuring temperatures across the range of depths that corals live and quantifying variability related to the internal waves we were observing in our time series.

Internal waves are very large waves below the ocean surface. They travel slowly along the interface between surface and deep ocean layers, typically at depths of approximately 20 to 80 metres depending on patterns of vertical water column temperature and density stratification.  They can have wave heights of 10s to 100s of metres and periods of 10s of minutes to multiple hours, which dwarfs the small, fast waves we are familiar with at the ocean surface (up to a few metres in height with periods of 5 to 15 seconds).

In our paper, using high-resolution temperature records gathered across reef slopes at depths of 8 – 50 metres, and a customised data filtering approach, we demonstrate that the presence of internal waves significantly reduced the magnitude and duration of severe heating events on coral reefs in multiple regions of the Pacific during the 2015-2016 El Niño.  This is important given the grave threats posed by recent ocean warming and El Niño heatwaves.  The 2015-2016 El Niño, for instance, was the hottest on record at the time and led to large-scale coral bleaching in shallow waters globally, including at some of our sites.  However, our analysis demonstrates that the majority of ocean-exposed reefs are likely to be cooled by internal waves. In deep water this may already be creating locations that could serve as refuges where corals may avoid some of the immediate effects of climate change that are dramatically changing reefs in shallow waters near the sea surface. In our long-term data we frequently observe individual internal waves causing temperatures to fluctuate by 10 °C or more within minutes to hours as cool water, normally deeper in the water column, is pushed upwards onto reefs.

Our study demonstrates that a full analysis and complete understanding of heat accumulation and heat stress on reefs, including variability from internal waves, requires high-resolution field data that can be difficult to obtain, especially across the full range of depths relevant to reef corals. We used SCUBA diving to deploy and maintain temperature loggers across the Pacific Ocean, focusing on long-term sites at Iriomote in Japan, Moorea in French Polynesia, and the Gulf of Chiriquí in Panama. Although relatively straight-forward to collect, these long-term field data turn out to be quite rare because of the difficulty of maintaining instruments across depths over a long period of time, especially in remote locations.  Also, long-term records below the ocean surface are rare to non-existent because modern instruments capable of long-term, high-resolution observations have only existed since the advent of low-power electronics and large, low-cost on-board memory storage in the last few decades.  Large waves and disturbances such as in typhoons and cyclones are especially risky for loosing loggers and the precious long-term data they contain.  So, it is essential to deploy redundant instruments and to visit sites often enough to reduce the risk of losing large quantities of data if a large storm comes through.

Our approach to compare the temperature time series with and without internal waves involved developing a custom filtering method to remove the high-frequency variation associated with internal waves and then compare metrics of heating in filtered and un-filtered data.  This is necessary because it is impossible to conduct manipulative experiments that alter physical processes such as large internal waves that occur across vast oceanic scales.  So, our study represents a type of analytical experiment on directly measured observations, to study the impacts of internal wave presence/absence for coral reef habitats. Our work was very much facilitated by, and underscores the great value of, long-term data sets. Long-term sites like those we have established in Japan and Panama, and the Moorea Coral Reef Long-Term Ecological Research (LTER) site are invaluable for understanding reef ecosystems and accurately predicting their futures. Specifically, continuous in situ temperature records like those we have gathered across the Pacific Ocean are essential for quantifying and predicting thermal stress and potential refuges that may affect coral bleaching patterns at local to global scales. We hope our work can help to shift focus from the surface-only view of coral reef thermal stress, with evidence that satellite-derived measures of heating do not capture the full temperature environment experienced on coral reefs across depths.

Our results demonstrating the widespread cooling by internal waves suggests a degree of hope for coral reefs – that there can be zones of reefs at least partially protected from the dire consequences of climate change, ocean warming, and increasingly frequent bleaching events now widely observed in shallow water.  Areas that are naturally cooled by internal waves may be acting as partial refuges from the serious impacts of climate change on coral reefs.  However, because the oceans are warming rapidly, such refuges may offer only temporary protection.  Immediate reductions in green-house gas emissions are essential to preserve reefs. Also, importantly, we know very little about how climate change and ocean warming will affect the occurrence of internal waves and the depths to which they cool coral reefs in the future. There is a range of questions stemming from this research, particularly considering the broader biological effects and ecological implications of internal waves for coral reefs.  We have demonstrated that internal waves cause significant cooling of reef habitats, which could be important for protection from bleaching.  This cold water is also likely to contain significant amounts of dissolved nutrients and particulate food for corals.  The rates of supply of material essential for coral growth by internal waves is an active area of ongoing work.  Conversely, in regions with strong internal waves or low oxygen layers offshore, internal waves may, in fact, function as a source of stress for corals by upwelling water that is too cold or oxygen-depleted for corals to survive.  A broader global network of in situ observations across reef depths will be useful for identifying coral reef habitats that are supported or hindered by internal-wave upwelling, and how climate change is altering interactions between reefs and internal waves.

This research was the product of a long-term collaboration between researchers at The Hong Kong University of Science and Technology, The University of Tokyo, Scripps Institution of Oceanography at the University of California San Diego, U.S. Geological Survey, and Florida Institute of Technology.

For more information on internal-wave cooling of coral reefs check out the paper (https://www.nature.com/articles/s41561-019-0486-4) and a cartoon of the findings below.

Alex S.J. Wyatt
Assistant Professor, The Hong Kong University of Science and Technology
Follow
Alex is a marine biologist and oceanographic engineer by training, with multi-disciplinary research interests at the interface between marine ecology and oceanography. 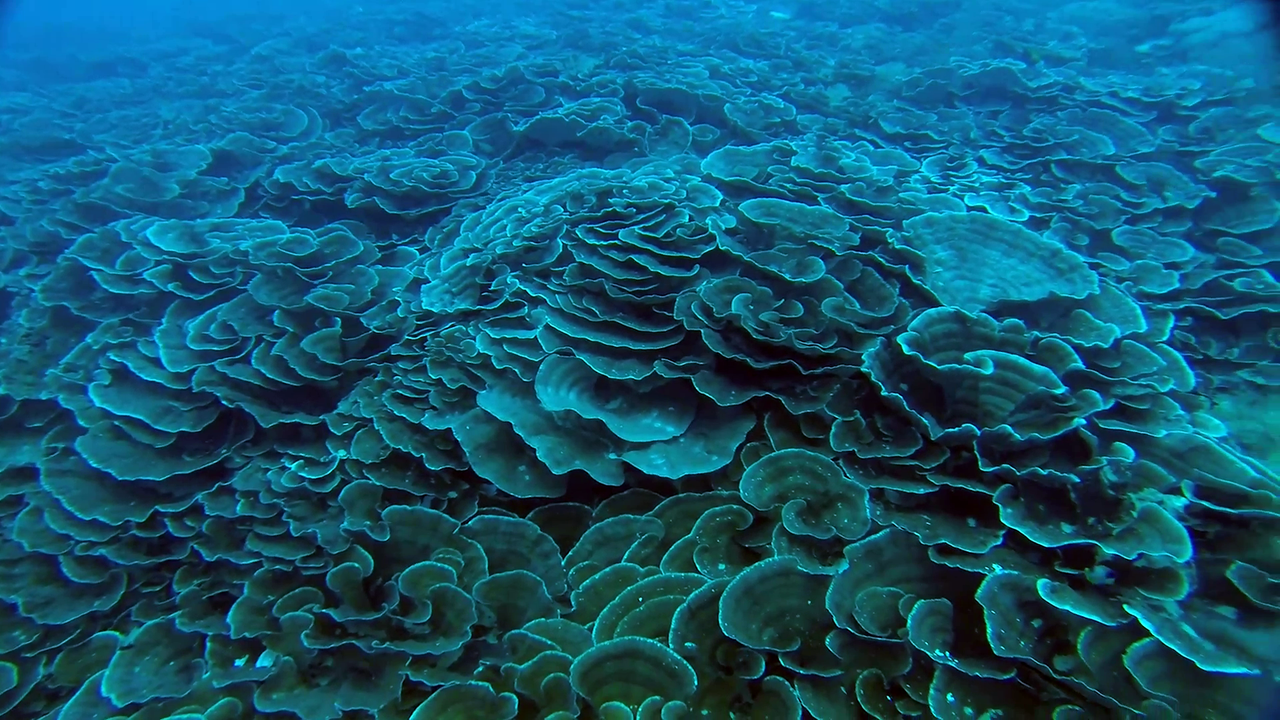 Global heating threats to coral reefs have received significant attention in the literature and media. In a new study across the Pacific Ocean, we show widespread cooling of reefs by internal waves – a ubiquitous process reducing heating accumulation in potential refuge habitats.