Feeding on phototoxic algae: training for unicellular predators to evolve to algae

The chloroplast was established through predation, temporary retention, and finally permanent retention of a photosynthetic prey/endosymbiont by a eukaryotic cell. Some mechanisms required to regulate the chloroplast likely started to evolve in ancient prey-predator relationships.

Mitochondria and chloroplasts are relicts of the ancient bacterial endosymbionts that introduced oxygenic respiration and photosynthesis into eukaryotic cells, respectively. Regarding the chloroplast, it was first established in a primitive eukaryotic cell through endosymbiosis and enslavement of a cyanobacterium. Chloroplasts then spread into several eukaryotic lineages by multiple independent endosymbioses of unicellular eukaryotic algae into previously nonphotosynthetic eukaryotic cells. The relationship between algal/plant cells as hosts and their chloroplasts as endosymbionts is recognized as a mutual symbiosis: the chloroplast supplies photosynthesized organic compounds to the host cell and the host cell, in turn, supplies inorganic materials to the chloroplast. Consequently, several mutual benefits are often featured when endosymbioses are discussed although there are also negative things on each partner. The chloroplast lost its free-living life and the host cell became obligated to fertilize and illuminate the chloroplast. This is just like a happy marriage with goodbye to freedom. After that, both partners are obligated to help each other under mutual regulation and compromise to avoid conflict. Otherwise, the symbiotic relationship will be divorced or, even worse, it will turn into mutual destruction.

Previously, we examined how algal cells grow and divide depending on photosynthesis in chloroplasts, which supplies organic compounds for cellular growth while generates reactive oxygen species (ROS) at much higher levels than those produced by respiration in mitochondria. We found that the timing of nuclear DNA replication (S phase) is restricted to evening and night when activities of photosynthesis in chloroplasts and respiration in mitochondria are transcriptionally compromised by the host nucleus. This temporal restriction of G1/S transition of the host cell reduces risks of nuclear DNA damage by oxidative stress that result from chloroplast photosynthesis and mitochondrial respiration1. That is, the eukaryotic host compromised by restricting the timing of nuclear DNA replication and subsequent cell division while chloroplasts and mitochondria compromised to reduce the activities of energy conversion toward evening and night to avoid damaging conflict and cope with living together.

When I and other lab members were drinking beer one night as usual, the above mutual restriction between the eukaryotic host and chloroplasts/mitochondria came up for discussion. Eventually, we arrived at the question of how such mutual restrictions emerged and evolved. Regarding this matter, it is widely believed that chloroplasts were established through the phagotrophic ingestion of photosynthetic prey, transient retention, and ultimately obligate retention of photosynthetic endosymbionts by unicellular eukaryotes. This is because several unicellular eukaryotic groups contain non-photosynthetic predators and organisms that ingest algal cells by phagocytosis and temporally retain and utilize them or their chloroplasts. Often, these species are closely related to phototrophs that possess bona fide chloroplasts of secondary endosymbiotic origin. Our discussion soon pointed out that photosynthetic oxidative stress is the root of all evil that takes away freedom and results in the mutual compromise in endosymbioses based on photosynthesis. This evil probably also affects temporal endosymbiotic and prey-predator relationships. For example, when unicellular predators ingest unicellular algae, light reaches the prey during the daytime, and ROS will be generated inside the predators’ cells. In addition, free chlorophyll molecules (produce ROS in the light) detached from the photosynthetic apparatus probably occur during digestion inside the predators’ cells. Thus, prey probably exposes the predator to oxidative stress in the light while the predator likely responses to the stress and possibly performs some action on phototoxic prey. This is likely one of the origins of the mutual regulation in endosymbiotic relationships.

Several months later after the above discussion, Mr. Akihiro Uzuka joined us as a graduate student (April 2013). During the (non-alcohol) discussion on possible themes of his graduate study, he became interested in the prey-predator project. At that time, I told him that the theme was dangerous because we had not prepared anything, even cultures of unicellular predators to be examined, other than our enthusiasm. However, he was persistent and we finally decided to help him pursue that project.

The first thing to do was to obtain predators feeding on unicellular algae. Among ciliates, flagellates, and amoebae as well known algal grazers, Akihiro chose amoebae. The reason was just that he loved slowly moving organisms for microscopic inspection but this choice, in the end, offered us an opportunity to compare organisms of different lineages as explained below. Then, we searched amoebae in databases of culture collections and found some strains. However, these amoebae had been cultivated with bacterial prey such as E. coli for a long time and it was unclear what kind of prey they fed on in the wild. That was why we went to a marsh which was sunny, shallow, and rich in algae. There, amoebae feeding on algae were well exposed to sunlight. As a result, he succeeded in isolating three kinds of amoebae (two belong to Amoebozoa, one to Excavata). Excavata and Amoebozoa are two distinct eukaryotic supergroups, so these amoebae are distantly related. Thus, we happened to be able to get insights into the generality and diversity in the effects of preys’ photosynthetic traits on predators in this study.

Then Akihiro developed coculture systems of the amoebae and photosynthetic/nonphotosynthetic bacterial prey. He examined the effect of the photosynthetic trait of prey on behaviors and transcriptome of amoebae by culture experiments and computational analyses. Because these amoebae were newly isolated, the condition setting on every experiment took much time and effort. In such a situation, he persevered with his study. He fulfilled his patience that was probably strengthened when he tried to become an oboe player with repetitious practice of that and other instruments more than 10 years.

After getting experimental results that became the framework of the published paper, he obtained Ph.D and found a job with an IT company. His targets have changed from amoebae feeding on algae to much bigger stuff. His new favorites are heating furnaces feeding on scrap iron. One of his current projects is, based on the results of inspection and data logging of the furnaces, to construct computer-based regulation systems that maximize their efficiency. Then the project of amoebae was passed to Drs. Yusuke Kobayashi and Ryo Onuma for substantial revisions of the manuscript after the first round of peer review while they were conducting their own projects on eukaryotes accommodating facultative or temporal algal endosymbionts, respectively.

With regard to the low uptake and rapid digestion of the photosynthetic prey by amoebae upon illumination, digestion/expulsion of facultative algal endosymbionts has been observed in other eukaryotes (e.g. paramecia with green algal endosymbionts and coral cells with dinoflagellate endosymbionts) on conditions that enhance photosynthetic oxidative stress. Our phylogenetic analysis suggests that the gene likely involved in chlorophyll degradation/detoxification was acquired by distantly related amoeba species by independent horizontal gene transfer (HGT) events. Thus, the results suggest that prototypes of some mechanisms that are required to accommodate and regulate photosynthetic endosymbionts/chloroplasts would have developed in their predatory ancestors.

It has been widely assumed that the nuclear genes encoding chloroplast-targeted proteins were translocated from the genome of already established cyanobacterial endosymbiont to the nuclear genome of the host cell. However, some nuclear genes encoding chloroplast proteins are apparently of other bacterial origin2. It is likely that genes of HGT origins took over the function of some cyanobacterial genes after the permanent endosymbiotic relationship was established. However, another idea is that some genes, regardless of cyanobacterial or other origin, likely had been acquired by the eukaryotic nuclear genome through HGT, for example from prey, before the ancestor of the chloroplast became a permanent endosymbiont as in the case of the homolog of genes for chlorophyll degradation/detoxification in the amoebae.

Now, Drs. Onuma and Kobayashi are testing the above possibility using their favorite eukaryotes with transient and facultative photosynthetic endosymbionts. Further studies sometimes with drinking discussion will figure out how endosymbiotic evolution progresses based on mutual restrictions between the partners and acquisition of genes by eukaryotic hosts. 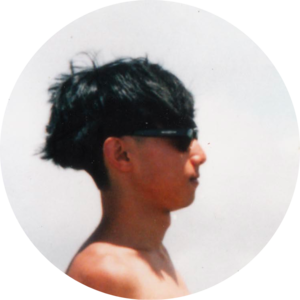