Rushing conclusions on ecological processes in long-lived organisms from short-term studies often results in misleading assessments; sometimes waiting a little longer sets us on the right track to better understand nature.
Diego K. Kersting
Researcher, University of Barcelona
Follow
Like Liked by Ruth Milne and 2 others
1

All long-term data series start someday and at that moment the person setting up the series is probably not thinking – “I will be running this monitoring for 20, 30 or 40 years”. But at some point, you realize that your monitoring will turn 20 years old soon… like the coral monitoring we set up at the beginning of the 2000s in a tiny and isolated volcanic archipelago in the Mediterranean Sea: the Columbretes Islands.

Long-term data series begin with an initial objective, which however often expands and evolves as time passes, providing more information than initially thought. Our aim was to monitor warming-related mass mortality events in the Mediterranean Sea, which back then had been only witnessed at the end of the 1990s in some NW Mediterranean locations. Our team, led by Mikel Zabala from the University of Barcelona, had experience in monitoring gorgonians using permanent transects, or better said permanent plots, that were revisited in time. We took a similar approach in Columbretes, but with a very different species, the scleractinian coral Cladocora caespitosa.

Cladocora caespitosa is the only reef builder coral found in the Mediterranean Sea, a species that is considered a relict reef builder and a missing link to both the tropical reefs and the reefal ecosystems that occurred in the Mediterranean Sea before the end of the Messinian. While reefs build up by this coral are frequent in the fossil record, large bioconstructions have become extremely rare in the modern Mediterranean. One of the few sites still harboring large C. caespitosa colonies and patch reefs are the Columbretes Islands.

We set up a permanent transect including 250 coral colonies that were individually tagged, photographed and drawn. Those colonies have been monitored every year after the summer, until present. We started assessing warming-induced necrosis by evaluating the percentage of each colony that had died after the summer. It is important to note that this coral does not bleach as observed in most of tropical corals, it dies from a rapid necrosis process without previous bleaching. The first mortality recorded in our transect was devastating; it was during the summer of 2003, considered the warmest summer in Europe since 1500. Twenty-five percent of coral cover was lost due to warming-induced necrosis and many of the tagged colonies were completely dead or showed dead areas. Parallel to coral monitoring, we keep a precise record of water temperature since the 1990s; summer heatwaves became recurrent during the 2000s and 2010s and so became coral mortality. This information allowed us to describe, in a previous study, the long-term response of this coral to water warming and the association between positive thermal anomalies and coral mortality.

Recurrent mortalities left many dead colonies behind. To check for potential recoveries, we kept on monitoring all colonies, the dead ones as well. Our initial observations showed that after mortality the dead areas were rapidly covered by epibionts, mostly algae, and no recovery signs were detected. The absence of recoveries did not surprise us because of the phacelloid nature of C. caespitosa. Even though polyps live close to each other in a Cladocora colony, there is no connecting tissue that could facilitate rapid recoveries of adjacent dead areas.

The future was looking dark… The lack of recoveries, the recurrent mortalities and the slow population dynamics of the species (i.e., slow growth and low recruitment rates) predicted a discouraging scenario, and in a climate change context, heatwaves were not expected to decrease in frequency.

But luckily, we kept on looking at the dead colonies; although I must say I was often tempted to take them out of the transect. We perform this monitoring in October-November, when the necrosis event is over and we can be sure to record it in all its extent. Believe me, monitoring 250 colonies in autumn in the NW Mediterranean is not always pleasant. It takes many hours underwater at depths that eventually force you into decompression and at water temperatures that, although not as cold as in winter, are cold enough to make you have to wear a dry-suit during long dives. In these conditions the temptation of leaving dead colonies out of the transect, and thus make it a little shorter, comes back to your head every time you visit the Islands for the monitoring. Especially when you already spent one hour underwater, still have many colonies to monitor in that same dive, and need to go to the bathroom urgently...

Long-term observations are crucial to describe and understand processes in long-lived organisms. Information spanning over shorts periods of time may lead in these cases to misleading conclusions and predictions. And Cladocora has been no exception; recoveries were not detected in the short-term (being short-term here several years), but what we thought to be impossible came slowly into sight, at first blurry but gaining focus as time passed.

– “That colony died in 2006, how come are there now living polyps on it? Did I record that information wrong?”. At some point this situation became too usual, there were dozens of colonies, completely or partially dead, that were showing living polyps on dead areas. At the beginning we thought that these recoveries could be a result of recruitment, which even if rare, could of course be occurring. But as we realized that this was happening too often and in too many colonies, we started suspecting that something else was going on. We took a closer look at those colony areas and took samples to be analyzed with computed tomography (CT scan). In the field we found the occurrence of little polyps somehow hiding inside the denuded calyx. In recently warming-impacted areas those polyps were unusually small and had partially abandoned the skeleton, while in older dead areas we observed that those polyps had begun to build a new skeleton creating a small calix inside the original one. CT scans evidenced continuity in the skeletal structures between the old and the new calix and these structures helped us to unravel the origin of these mysterious survivals. That little polyp was the same one that once used to cover the whole calyx, but it had drastically reduced its size, partially abandoning the skeleton but keeping connection to some of the old skeletal structures.

After not finding descriptions of similar processes in the literature on extant corals, we took a look at what had been described in fossils. And it was there! That process had been called rejuvenescence in fossil corals, mostly in Rugosa, an extinct coral genus from the Paleozoic. That was a surprise. In fossil corals this mechanism was described as a survival strategy that would help corals withstand periods of stress. And that is exactly what was happening with C. caespitosa. Summer heatwaves were killing most polyps in the affected colony areas, but some of them or sometimes only one, would shrink in size, partially abandoning the skeleton, adopting a kind of transitory resistant form. When conditions improve, the polyp grows back to its original size and starts budding, eventually recolonizing dead areas.

This process was observed in almost 40% of the warming-affected colonies in our transect, which shows the relevance of this mechanism and its role in the recoveries after warming-induced mortalities. This provides some hope for the survival of this endangered coral, making it more resilient that previously thought, but unfortunately, despite being highly efficient, the process is too slow to face the increasing frequency and intensity of Mediterranean heatwaves.

Our findings, here in detail, provide the link between rejuvenescence in fossil and extant corals, and thus the first living clues to better understand and interpret the occurrence and causes of this process. We hope that this link between such different coral orders (Rugosa and Scleractinia) might as well stimulate new discussions and research on the evolution and continuity of survival strategies in corals and perhaps on the evolution of corals in general.

Using Mikel Zabala’s words, this has been mainly a “pencil and dive slate” study, based on observing nature, taking notes and looking at the details year after year. We strongly belief in this naturalistic approach and despite all the difficulties associated in maintaining long-term observational series, their relevance in the current context of climate change and nature degradation is more important than ever.

Thank you for this great story behind your paper. This provides a really good example of the value  and importance of long term monitoring! 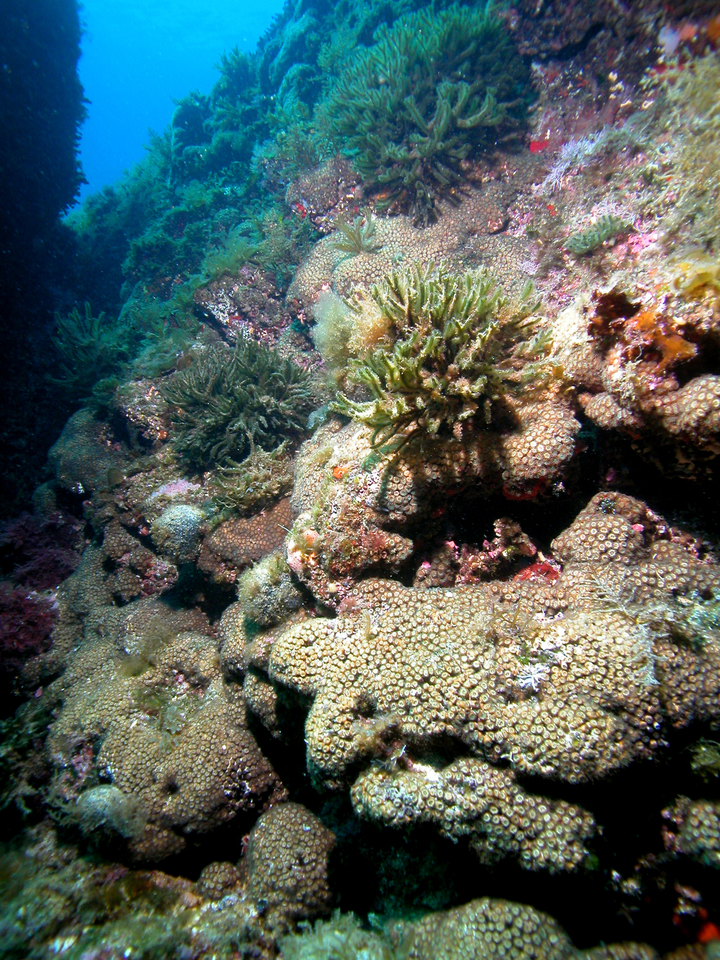