The Evolution of Aquila

I’ve been meaning to get my hands on a copy of Aquila for some time, as my children are just coming into the right age bracket (8-12). So, when I saw that January’s topic was Evolution, I jumped at the opportunity. I wanted to check out how they went about engaging children with a serious and sometimes difficult scientific topic, do a pedantic check for accuracy, and also see if the magazine really is as beautiful as it looks in the adverts.

First up, the look – yes, it really is a very attractive piece of work. From iconic Galapagos species, to fantastical beasts from the future, to the immortal jellyfish, a team of different illustrators have produced some striking cartoons (they are certainly people to bear in mind when commissioning our annual January cartoon cover of Nature Ecology & Evolution…). It’s definitely a quirky look, quite the opposite of the photographic and rather conservative National Geographic style that many might be more familiar with. And that quirkiness extends to the writing style, which is full of jokes and tongue-in-cheek notes from the Editor. I can see that, especially after a couple of issues, this might really help children to feel a personal connection with the writers.

What about the content? Each article is a double-page spread, and we start, as you might expect, with the story of Darwin and Wallace, weaving together a nice mix of history and scientific concept. If this is unavoidably bearded and Victorian, the quiz a few pages later featuring Dorothy Garrod, Barbara McClintock, Jane Goodall and others is a good antidote. Next up is adaptation (though not named as such), with a feature on imaginary birds with different beak shapes and diets. It felt a bit laboured at first, given they could just have used Darwin’s finches or another real example, but it does make a bit more sense when they follow on with a suggested experiment that looks at how long it takes to get biscuits or lentils out of a tray using either tongs or spoons. If I’m really pedantic, I think it probably suggests the wrong balance between intraspecific and interspecific competition as a selective force, but I think we can allow that at this level in order to make the main point.

Another feature introduces the concept of the genome, and the fact that species have a lot of sequence similarity. It’s a fun set of facts about percentage sequence identity, with an attempt at introducing some caveats, although I did come away a little confused as to what point it was really trying to make. The related feature on DNA, mutations and selection comes quite late in the magazine, and I wondered if it would have been more helpful to put it up front, or at least second to the Darwin/Wallace story. I was happy to see a feature written in association with the Galapagos Conservation Trust making the link between evolution and conservation, and the article on Dougal Dixon’s speculations on evolution in the future was great fun. An article on ageing, focusing on the immortal jellyfish, does a great job of introducing some tricky concepts, such as telomeres and stem cells, although it does feel a little less central to the main theme of the issue. And I felt that the value of the article on children’s mental wellbeing might have been compromised by trying to shoe horn it into an evolutionarily themed issue, and there is a risk of suggesting evolutionary psychology links that just aren’t real.

Like all good children’s magazines, there’s a quiz and activity page. The questions seem well balanced in terms of topics, but I did wonder if those whose answers are not discussed elsewhere in the magazine could do with a little more exposition – how many 10-year olds will know about the enlarged spleens of Bajau divers, for example? There are also some good activities: as well as the bird beaks I mentioned earlier, there are instructions on how to make a trace fossil.

My only other bug bear is that I think they give a little too much prominence to evolution denial. I don’t mean that they cut the deniers any slack, just that they mention them in the second paragraph of the opening editorial, and there’s a whole box about it in the first feature. It’s a difficult one, because the fact that some people don’t believe in evolution is probably the most well known fact about evolution amongst the general public, and it is something that does need to be robustly countered. So perhaps it’s just a matter of personal taste as to when and where to do that.

Minor quibbles aside, this was a fun, attractive, and remarkably informative read. But then again, I’m probably fairly easy to win over (and that’s not just because the magazine mentions just one scientific journal by name… you guessed it, Nature Ecology & Evolution!). The real critics that need to be won over are the kids. Next week is the half-term holiday, and there’s a storm forecast here in the UK, so I’m thinking there will plenty of indoor time for magazine reading. Watch this space for the results…

The one I missed! I discovered it in another magzine just before I left London. Or else I could spread it to Chinese students. 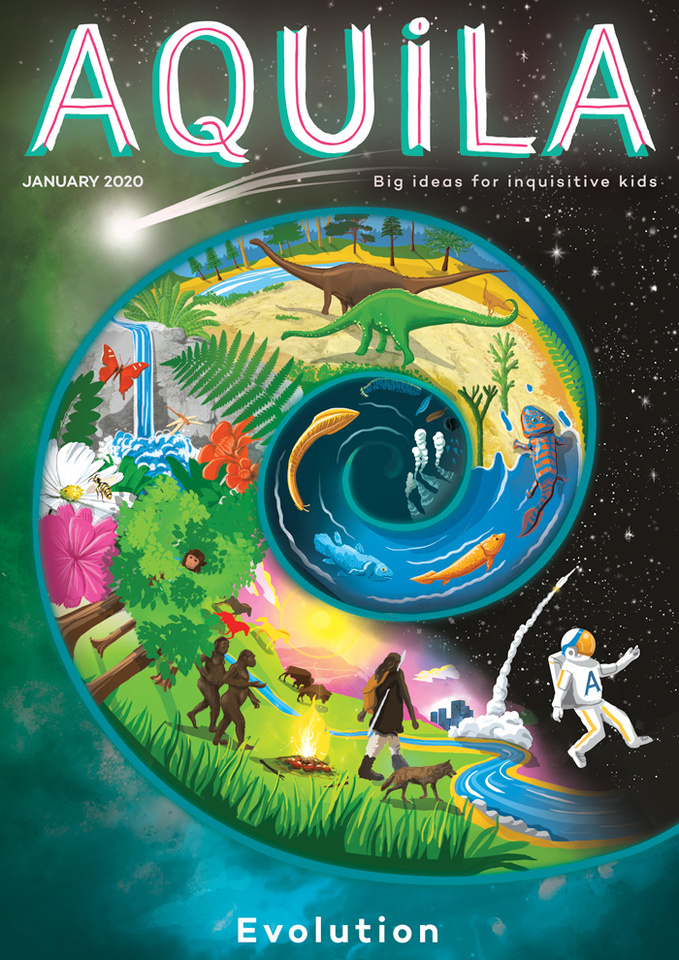 The Evolution of Aquila