The transition of fishes to land animals (tetrapods) was one of the biggest steps in evolution. Digits were always thought to define tetrapods, but now a spectacular new fish fossil from Canada reveals that digits first evolved inthe fins of fishes before they left the water.
John Long
Strategic Professor in Palaeontology, Flindesr University
Follow
Like Liked by Gao Jianguo and 1 other

The discovery of the fossil remains of a tetrapod-like fish sheds light on the order in which important tetrapod characters arose.

By John Long and Richard Cloutier.

Tetrapods are the four-limbed animals that include all amphibians,reptiles, dinosaurs, birds and mammals. The first tetrapods appear to have evolved from advanced lobe-finned bony fishes, called epistostegalians, sometime in the Late Devonian Period, between 370-380 million years ago. This is considered by many scientists  as one of the greatest evolutionary transitions, the event that defined how vertebrates would take over the land and ultimately become adapted to living a terrestrial lifestyle away from the water. The big questions surrounding this transition involve when and why did fishes begin to evolve adaptations for terrestriality.

One of the biggest changes in body form was that of evolving fins used for swimming into limbs with digits for walking on land.  While the arm (pectoral fin) structure is the same in these fishes as in tetrapods, both having humerus-ulna-radius bone patterns and some carpal elements, the presence of digits has long been a defining feature of all tetrapods.

Our new study, published in Nature  describes the pectoral fin skeleton of the most complete elpistostegalian fish yet found, a new specimen of Elpistostege watsoni from the famous Miguashua fossil site in Quebec.  Up until now Tiktaalik has been the poster child for those studying the fish-tetrapod transition because it revealed several intermediate features only otherwise seen in tetrapods. However, despite its beautifully preserved skull and pectoral girdle and fin, it lacked details of the extreme end of the pectoral fin skeleton.

Elpistostege watsoni was first described from a puzzling skull roof found at Miguasha in Quebec in 1938 by British palaeontologist Stanley Westoll, who then thought it might be an early amphibian skull. Later more remains turned up, including the front half of a skull. The authors who described that specimen in 1985 thought it belonged to a very advanced kind of lobe -finned fish. A grouping of these advanced fishes and early limbed tetrapods are called  'elpistostegalians' after Elpistostege. These include Tiktaalik and Panderichthys, but none are as complete as the new specimen of Elpistostege described in our paper.

The new specimen of Elpistostege was found in 2010 at the UNESCO world heritage listed Parc de Miguasha in Quebec, a site famous for its exquisitely preserved fauna of fishes of Late Devonian age (c. 380 million years old). The specimen has perfectly preserved pectoral fins, which have been studied using micro-CT scanning tomography to reveal the articulated internal fin skeleton. Using Mimics segmentation software, we were able to identify all the bones in the pectoral  fin from tomographic cross-sections and reconstruct the complete fin structure in an elpistostegalian fish for the first time. The new study reveals that these extreme ends of the fin contain a series of small radial bones that occupy the same topology in the Elpistostege fin as do digit bones in tetrapods - the bones conventionally called ‘phalanges’ in our fingers and toes.

Some details of the new specimen of Elpistostege, showing bones in the pectoral fin compared with that of an early tetrapod.

This means that the bones found in our human hand that make up our fingers have their origins in fishes, and such structures clearly evolved well before they left the water. Elpistostege also  shows many other features that will help us refine the anatomical changes that took place as fishes became more terrestrial, and these will be revealed in future papers as the complete specimen is described in more detail.

The project began as a collaboration between Richard Cloutier and John Long when they meet up at a Society of Vertebrate Paleontology meeting in 2013. Richard's lab at the University of Quebec at Rimouski involved Isabelle Béchard who did some of the first CT scan interpretations using Aviso software, and students Roxanne Noël and Vincent Roy who did projects on different aspects of the specimen's anatomy.

At Flinders University Alice Clement took over segmenting out the pectoral fin using Mimics software, and Mike Lee who undertook control of the phylogenetic analyses, after all characters in the new matrix were coded by Richard and John. John visited Richard's lab in Rimouski in 2014 and 2016, and Richard spent 6 months working at Flinders in 2019, bringing important fossil specimens with him for more scanning, so the paper is the result of 6 years collaboration plus the initial descriptive work undertaken by Richard's team at Rimouski which started immediately after the specimen was excavated.

The paper is the result of combining resources of the Canadian team’s CT scan data and observations on the original fossil specimens with Flinders lab skills to segment out the anatomy of the specimens and perform rigorous phylogenetic analyses. The draft paper came together in 2019 and was submitted to Nature only weeks after Richard had headed back to Canada.

The team will continue researching this amazing fossil specimen with future papers planned to reveal the cranial anatomy and other parts of the postcranial skeleton to show further adaptations for terrestrial life. 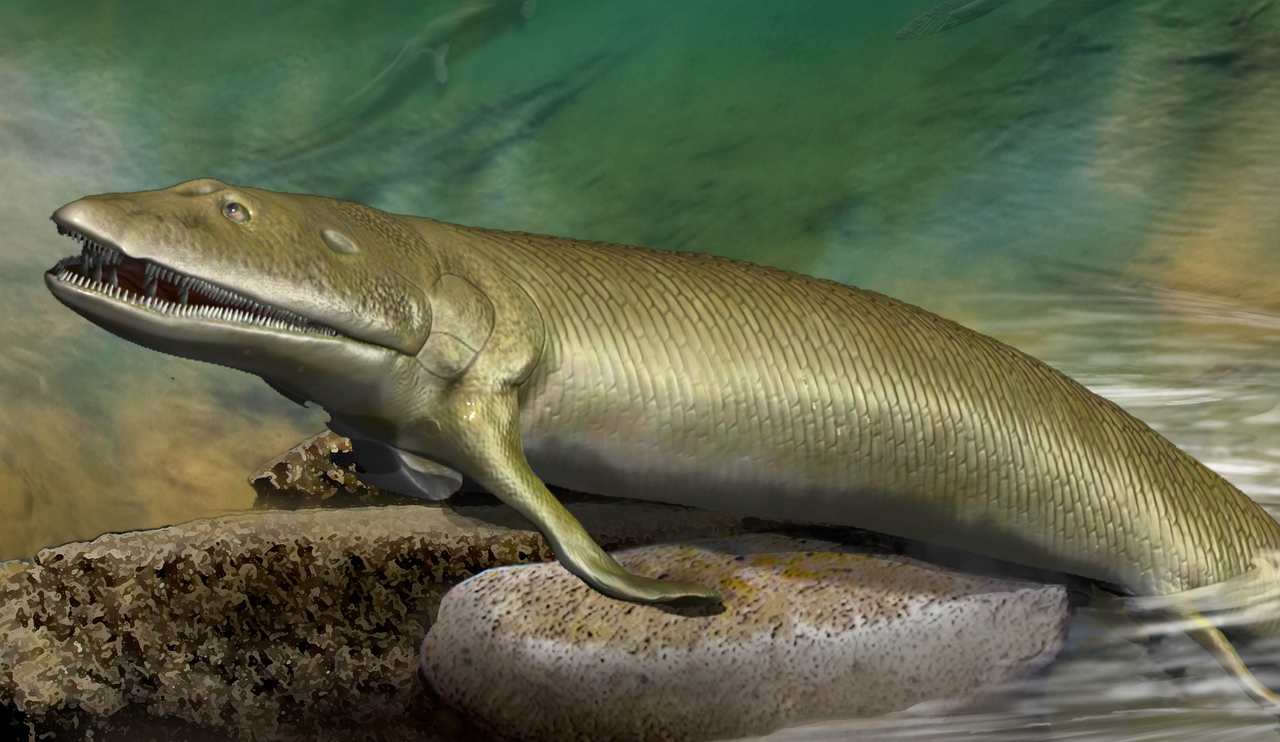 The transition of fishes to land animals (tetrapods) was one of the biggest steps in evolution. Digits were always thought to define tetrapods, but now a spectacular new fish fossil from Canada reveals that digits first evolved inthe fins of fishes before they left the water.