Early in the year, the great and the good descend on Davos for a world forum. Yes, that's right, the World Biodiversity Forum. OK, joke done - it's wishful thinking that a crowd of biodiversity professionals have the kind of influence that they should do if we are to move towards a sustainable world. However, maybe holding the first WBF meeting in Davos, in the same congress centre used by the World Economic Forum a few weeks previously, is a good sign, and a first step towards moving biodiversity up the global agenda in this crunch year.

The idea originated with a biodiversity initiative at the University of Zurich, which led to the inspired decision to organise a global meeting, hold it in Davos, and play on the WEF name. I'm told they did check with WEF, who were fine about it, and indeed I understand that WEF brings so much money to the congress centre that it is relatively good value to hire at other times of the year. Moreover, conference organiser Michael Schaepman is holding a meeting with the WEF leadership in the coming weeks, so perhaps something more formal could arise. WEF have certainly pushed environmental topics in recent years, and many scientists have been involved. Indeed, Nature's chief editor is a regular attendee at Davos, and other Nature editors, myself included, have been involved in WEF satellite meetings. Having said that, one cynic at WBF told me that the scientists are just invited to WEF for light entertainment.

So, what was WBF like, did it differ from a regular science meeting, and are there signs it could achieve the influence it aspires to? I don't have any data on the attendees, although I was told there were about 500. From show of hands in one session, I would estimate that two thirds were natural scientists, with most of the rest being social scientists. There were invited speakers (see below) from slightly different fields, but I don't think there were a substantial number of, say, people directly involved in policy, or non-scientists from conservation organisations or NGOs. I don't mean that as a criticism, and hopefully it will be possible to branch out in future meetings. In terms of geography, there was obviously a heavy Swiss presence, and a substantial European bias overall. Outside of the invited speakers, there didn't seem to be a particularly large contingent from the Americas. Africa was given a good degree of prominence in the plenary sessions, and there did seem to be a reasonable number of African delegates. I imagine the lack of much Asian (especially Chinese) presence was due to Covid-19. I didn't check the gender balance across the whole meeting, but for plenary speakers it was 2:1 male:female. It's also worth noting a fairly regular problem with biodiversity meetings: when Rashid Sumaila asked for a show of hands for those who worked in marine rather than terrestrial systems, the response was woeful.

On the topic of Covid-19, and also policymakers, it won't have escaped the attention of many in the biodiversity field that this last week also saw the second session of the open-ended working group for setting the Convention on Biological Diversity post 2020 agenda. This was originally to be held in Kunming, China, but was moved last month, somewhat ironically it turns out, to Rome, Italy. In some ways, it was unfortunate that these two major biodiversity meetings clashed. On the other hand, I think it would have been wishful thinking to get many policy stakeholders to attend the first meeting of a completely unknown organisation. Instead, we had a live link up between Davos and Rome, with panellists in the former including the WWF chief scientist (a rare exception to my generalisations above) and the co-chair of the IPBES global assessment, and in the latter including the CBD working group co-chairs and the IPBES executive secretary. I think this worked nicely, allowing Davos to make some key scientific points for Rome, and Rome to give Davos a good summary of how negotiations were proceeding. By starting in this way, it is hoped that any future WBF might attract some of those who necessarily had to be in Rome this time. It might also make the IPBES-CBD link more seamless than it has been.

The plenary talks were in pairs, and were deliberately planned to push the majority science audience out of their comfort zone. For most, there was a science talk paired with something more philosophical, social or practical. In some cases the contrast was stark, possibly too much: David Tilman and Jens-Christian Svenning gave talks that had a heavy dose of pure palaeoecological science, and were paired respectively with Pragati Sahni on Buddhism and Jainism, and Markku Oksanen on philosophical ethics. Others made more complementary pairs, such as Benis Egoh on ecosystem service justifications for conservation and Gary Varner on compassionate conservation, or Lenore Fahrig on small versus large patch sizes and Odette Curtis-Scott on working with farmers in South Africa's Renosterveld. Sadly I missed Sandra Diaz's well-received plenary on the opening day, but other highlights were Emma Archer with a realistic but ultimately hopeful message on African biodiversity, Workineh Kelbessa on African worldviews in conservation, and Andy Purvis' dire warning against the CBD plumping for a single target for biodiversity.

Of course, it wasn't all about listening attentively to the plenaries - there were many top-quality regular sessions and a couple of special initiatives too. Remote sensing featured heavily, with some exciting new developments suggesting a much more important role in biodiversity monitoring in the near future. There were great sessions on nature-based solutions, life-cycle assessments, artificial light at night (ALAN, plus sibling ALICE - artificial light in coastal environments), the black box of soil biodiversity, and plenty on tipping points. Forest Isbell talked about an expert survey he is conducting, which you can still contribute to. There was an interactive House of Commons session in which the audience moved to one side or other of the house to vote on key biodiversity questions, and you can see a summary of the results on this Twitter thread. I particularly enjoyed the aquatic biodiversity session because of the novel way it had been organised: ABCD (All continents, Balanced gender, Carbon low, Diverse backgrounds). The idea was to use a mix of live in-person, remote live, and pre-recorded talks to allow a wider range of locations and time zones to participate and to keep monetary and carbon costs down. By mixing them up rather than having lots of pre-recorded talks in a row, and by using an online platform for questions, it didn't feel much different from a normal session. Finally, one evening we enjoyed hearing about and watching the tree of life films that Pam Soltis and Doug Soltis have made, which you can read more about here.

The organisation of the meeting seemed efficient, with no major hiccups. A special mention has to go to the fact that the food was default vegetarian, and I certainly didn't meet anyone who had opted in to having meat. And the vegetarian food was good, with the different soup each day being commended by many. Davos is a great location, and I don't think there was too much skiving to go skiing (although one person did tell me at great length everything he didn't like about the meeting before admitting that he'd missed half of it while on the slopes). Perhaps one or two more mixer events could have been held, beyond the first night and the conference dinner, but that's a minor quibble, and it is good to let people out on the town in their own small groups. I'm going to mention it, because it's a bugbear I mention at almost every conference: please make the name badges double-sided, or at least clipped in two corners, so you can read them more than 50% of the time.

So, what next for WBF? This was a great start, but it could become so much more. They intend to hold it again, probably in 2022, and hopefully they can capitalise on the links with WEF and CBD. Maybe they can even get some big names from outside science to give it more of the WEF feel, and also get a broader range of biodiversity stakeholders amongst the regular audience. That would give it a mission quite distinct from other science meetings, or from more focused policy meetings. I have high expectations for next time.

Thanks Michael, and thanks for organising such a great meeting. 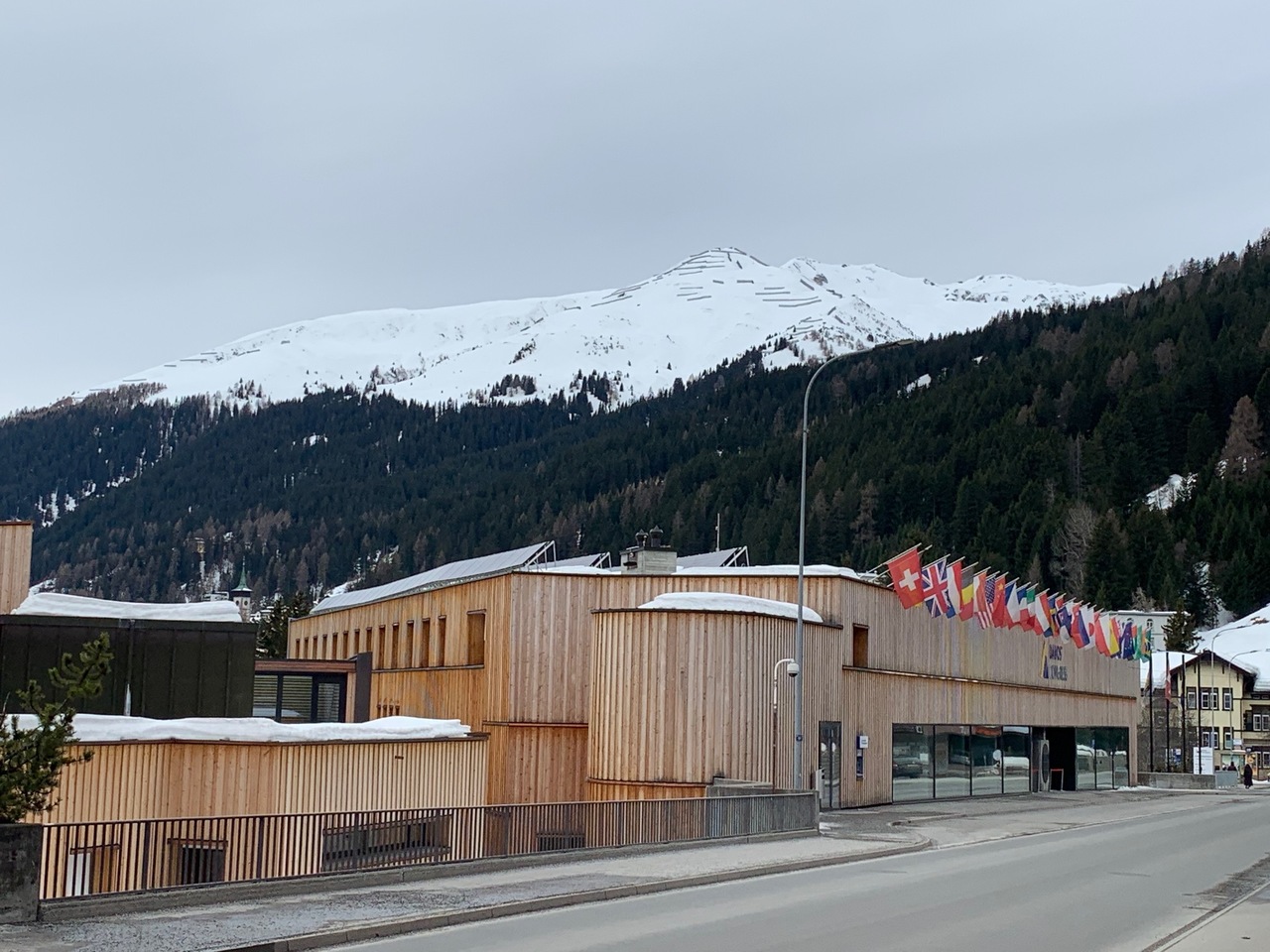