Is there a general rule for which species should be favored by increasing temperature, and can we predict how communities might respond to warming environments?

Microbial communities play a central role in regulating earth’s biogeochemical cycles, ecosystem productivity, and even our own health. These communities can be incredibly complex, with thousands of coexisting taxa sharing millions of metabolic and signaling relationships, and they are constantly in flux, with species abundances changing in response to the actions of other community members or to changing environmental conditions. This overwhelming complexity has led to an interest in developing simpler, model microbial assemblages that can be built from the ground up to understand how multispecies communities form and function.

Some of the colorful strains used in the experimental competitions in this study, which can be distinguished by their colony morphologies (Left). Our experimental protocol involved lots and lots of colony counting (Right).

By using tractable experimental microcosms, we can test theoretical predictions about the effect of a change in the environment, because we can simultaneously hold all other conditions constant.  This scenario rarely happens in nature—a change in ocean water temperature usually comes with a change in nutrient concentration, for example. In a previous paper from our group, Abreu et al. showed that an increasing death rate, introduced through increasing daily dilution factor, can have profound and predictable results on the competitive outcomes between species. In particular, that paper demonstrated that choosing a higher dilution factor should always favor the faster growing species, and modulate a competition so that a slower-growing species which dominates at a low dilution factor may coexist with or lose to the faster-growing species if the death rate increases.

Bacterial growth rates are, of course, a function of temperature. In our recent paper “Higher temperatures generically favor slower-growing species in multispecies communities”, we wanted to build on these prior results and figure out how this relationship between temperature and growth rate influences competitive outcomes between species with different growth rates.

Our first step was to understand how changing temperatures influence the growth rates of the bacteria we used in our study. For this, we turned to a discipline that has always cared about the effects of temperature on bacterial growth: food science. In fact, much of what we know about how temperature influences bacterial growth rates comes from a pair of papers from the early 1980s which studied strains isolated from spoiled shrimp and chicken skin. When analyzing the growth patterns of these species, Ratkowsky et al. noticed an intriguing pattern: that the square root of the growth rate of each species had a linear relationship with temperature. This is a completely phenomenological model, without a known underlying mechanism, but it has been consistently supported by decades of subsequent research. Plugging this growth rate model into the same competition model used in the dilution factor paper (the classic Lotka-Volterra competition model with an added death rate) revealed the surprising result that the slower-growing species in a competition should always be favored by increasing the temperature, because it minimizes the favor conferred to the faster grower by the added mortality.

The growth-temperature relationships of two species can intersect in a variety of ways.

Assuming this linear relationship holds true, there are a number of ways that the lines of the two species in a competition can intersect. In an ideal situation, the slope of the two lines may be equal, so that the species with the lower minimum growth temperature will always be the faster grower (above left). In this case, our theoretical prediction should always hold true. It could also be the case that the faster grower has both a lower minimum temperature and a higher slope (above center), so that there is still a universal ‘fast’ and ‘slow’ grower, but with a quickly increasing difference in the growth rates as temperature increases. Somewhat counterintuitively, the slow-grower is still always favored by an increase in temperature in this case.

If only nature were so simple. What we found when we actually fit the model to our species was that the two parameters (the minimum growth temperature and the slope) are very highly correlated, such that species which can grow at lower temperatures also tend to have lower slopes, implying that the lines of the two species are likely to cross, and that which species we call the ‘fast grower’ is a function of temperature (above right). In these sorts of cases, there is a less clear-cut theoretical expectation, especially in the temperature region near the intersect.

We were pleasantly surprised that our theory held in the vast majority of cases, and we also found that the outcomes in the 3-species communities were generally predictable from the outcomes of pairwise competitions, suggesting this theory may scale to even larger communities. It’s too soon to say how this theory applies to vastly more complex natural communities, especially those where temperature is constantly in flux, but it provides a general heuristic that can be tested in future studies and shines some light on how the choices we make in laboratory experiments with microbial communities can fundamentally influence our results. 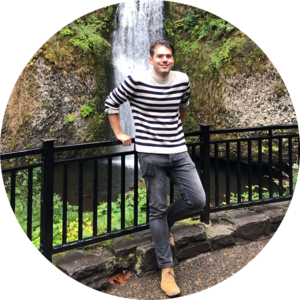