How invasive pathogens benefit from their cousins

Nowadays, forests are facing many great challenges, untamable fires and massive deforestation to name just a few. Forests can also suffer from significant and irreversible damages when being confronted with invasive alien species, including pathogens, which disturb rich and self-sustaining ecosystems. The challenge with accidental introduction of alien species intensifies with climate change and global trade. However, it’s not only the external environment that makes some species more aggressive than the others. Many microbial pathogenic species can adapt very quickly to new conditions, and how they do is often unclear. Recent advances in genomics have revealed that genomes of human and agricultural fungal pathogens undergo very different genetic changes that can lead to similar outcomes: rapid increase in virulence.

Tree pathogens do not always have this level of scientific attention, even though some of them impose severe negative consequences on forest ecosystems. The Dutch elm disease (DED) is one of those diseases that notoriously carry out a systematic and effective removal of elm trees from the city and countryside landscapes. Beginning in the last century, it has swept through Eurasia and North America twice, leaving great damages behind. For example, in Canada, a lot of effort has been put into replanting the trees, however the disease is still slowly expanding and threatening new areas. The fungi - named Ophiostoma - responsible for the DED, attack different species of elms across wide geographical ranges and are carried by different species of beetle vectors. These fungi face a great diversity of environmental factors. In spite of that, the subsequent outbursts of DED appear to be increasingly more difficult to control.

Invasive species can succeed because of many reasons, for example, in invaded territories they lack their own pathogens which controlled them in their native populations. Alternatively, they could be  genetically better adapted to new conditions. Previous studies looking at genetic variation in DED-causing fungi showed that strains found in close geographical proximity are genetically heterogeneous and some extent of introgression has been reported. This is unlike many other virulent fungi, which are highly clonal. This presents a challenging puzzle in terms of understanding genetic changes responsible for pathogenicity of DED-causing fungi. To get some clues, in our study, we looked at this genetic diversity in more detail by re-sequencing the genomes and phenotyping 94 isolates of the species of DED-causing fungus.

Genetically, Ophiostoma fungi are composed of two distinct lineages corresponding to two different species (O. ulmi and O. novo-ulmi), one of which (O. novo-ulmi) is responsible for the more recent and more aggressive DED epidemy and is further subdivided in our study into three lineages, one present exclusively in Eurasia (NOV), and two present predominantly in North America but not uncommon in Eurasia or New Zealand (AME1 and AME2). Despite very low genome-wide divergence between O. novo-ulmi lineages (~0.3-0.5% of pairwise sequence divergence) some genes are significantly differentiated between them, including genes being over-expressed in the yeast phase, one of the two phases of the fungus responsible for the effective invasion of the host tissues.

Besides several interesting differences, we find that the genomes of many strains we looked at were mosaics of 2, 3 or sometimes even 4 different lineages. Hybridization and introgression are common in this system, not only between lineages, but also between species, even if it comes at the cost of decreased fitness in the immediate hybrids. Indeed, many O. novo-ulmi carry introgressed regions from the older, less aggressive O. ulmi scattered in their genomes. Is it merely the consequence of accidental encounters of several fungal strains with different genetic background on a single tree, or does it help the fungi thrive in new invaded areas? Regarding introgression between the species, some key clues come from findings of previous studies. Most frequently introgressed genes include mating type locus and vegetative incompatibility loci (vic), and they have clearly an adaptive role. These fungi require opposite mating types for sexual reproduction, and unlike O. ulmi which has almost equal frequency of both types, most O. novo-ulmi have only one; the second, rarer one is almost exclusively acquired from O. ulmi, which allowed invading O. novo-ulmi to recombine with other strains. Vic genes on the other hand prevent fusion of individuals with different genotypes, but at the same time prevent the spread of fungal viruses transmitted in clonal populations by fungal fusions. The more vic types, the less likely two strains are going to fuse and transmit cytoplasmic pathogens between each other, therefore in low diverse (clonal) populations, introgression may be an only option to acquire new vic types.

MAT and vic are not the only introgressed genes from O. ulmi. Many genes that are frequently introgressed, especially those present on chromosome 1 turn out to be involved in host-pathogen interactions. An exciting possibility is that similarly to MAT and vic, introgression restores diversity in genes responsible for successful invasion of the host tissues or escape from the plant defense mechanisms. Whether these genes confer higher virulence against elms, remains to be examined. Testing for virulence in trees is challenging due to long generation time of trees, but labs working on pathogenicity of tree pathogens have came up with some innovations, one of which we tried in our study. Instead of inoculating the elm tissue with a fungus, we have inoculated apples, since it was documented that virulence of fungal strains on elm is correlated with the area of necrosis produced on apple surface. Our experiments have shown that change in virulence of O. novo-ulmi strains which have genes introgressed from O. ulmi depends on the genomic region where introgression takes place, and it increases for strains having introgressed genes on chromosome 1. Which host-pathogen interacting genes are driving this change, remains to further investigations.

Lastly, our growth experiment results made us look in more detail at temperature. By looking at colony growth, O. novo-ulmi grows better than O. ulmi in 25°C, but unlike O. ulmi its growth decreases with increasing temperature. It turns out that strains with introgression from O. ulmi, are better performers in 30°C than strains without introgression, but this effect is not observed in 20 or 25°C. Wider tolerance to temperature can have important consequences for invading species, for example it can determine how well the strains can tackle climate challenges, and how good are they at exploring new environments. In the end, it is a combination of novel genetic innovations and borrowed good-old solutions that shape these virulent and successful pathogens. 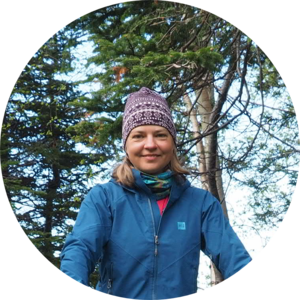