Plant life on the edge

In the far north-west of Canada, beyond the glacier-capped mountains, out along the Mackenzie delta and across the Arctic Sea, a scientist is crouched over a tiny sprig of Arctic heather. He has spent all day on the lookout for the patch of characteristic white flowers, rising just a few centimetres above the tundra. With caliper and notepad, hands now numb, he takes a few final measurements before hurrying back to the warmth of his cabin. The Arctic heather remains, flowers bobbing merrily in the breeze, quite at home at the cold edge of life on Earth.

That scientist, unsurprisingly, was me. And my hands have almost recovered. It can come as a bit of a surprise to some that I spent the majority of my time in this breathtakingly beautiful environment staring at the ground (with periodic scans for bears) taking intricate measurements of Arctic plants. However, the characteristics of plants, known as plant traits, can tell us a huge amount about their life strategies and how they might respond to climate change. In the tundra, which is currently warming more than twice as fast as the planet as a whole, being able to link rising temperatures to traits such as plant height is extremely valuable in understanding how whole ecosystems might change. Of course, that only works if tundra plants follow the rules.

The idea that plants follow general rules relating to their form and function is extremely appealing. The search for simple patterns underpinning the vast diversity of plant life on Earth has been on the go for at least a century, and perhaps as far back as Humboldt’s explorations over 200 years ago . What is more, if patterns in plant traits could be linked to environment or to species co-existence, we could see a revolution in our understanding of plant ecology - the “holy grail” of ecology according to some.

In 2016, a study led by Sandra Díaz provided a major step forward. The authors found that just two dimensions – plant size (large and woody vs small and non woody) and resource economics (acquisitive vs conservative) – explained the majority of variation in six fundamental plant traits across global plant species. In their words, “the global spectrum of plant form and function is thus, in a sense, a galactic plane within which we can position any plant—from star anise to sunflower—based on its traits.”

Now let’s return to our Arctic heather. With hardy evergreen leaves half the size of a grain of rice, a ground-hugging woody structure, and seeds almost too small to see, this dwarf shrub must surely occupy the most icy and distant of outposts within this galactic plane. And what about other tundra plants? Are they a close-knit constellation, or a scattering of stars throughout the galaxy? Inside a small room attempting to catch the last glimmers of a Scottish autumn, brains were whirring.

The greatest barrier before us lay in the data. The majority of the world’s plant trait data is collected from temperate regions and the tropics. Very little data was available for tundra plants. That might be appropriate to draw out patterns across the planet as a whole, but we wanted to understand if apparently underlying rules applied within the whole, in the extreme conditions in the tundra.

Step up the power of collaboration. Thankfully, I was far from the only scientist crouched over a sprig of heather. The “Tundra Trait Team”, led by Dr. Anne Bjorkman and Dr. Isla Myers-Smith and funded by the iDiv German Centre for Integrative Biodiversity Research and the Natural Environment Research Council of the UK, had been compiling just the information we needed to understand trait variation in the tundra. With help from well over 100 contributors, together adding over 50,000 new trait records, we now had the data we needed to test whether the two dimensions that framed the global spectrum of plant form and function held up in the tundra.

The answer in short, is that tundra plants occupy half of global trait space. The slightly longer answer is that although tundra plants do cluster together, they occupy a surprisingly wide range of global trait space. Although they are at the small end of plant life on Earth (as you might have expected), they still have remarkably varied strategies for capturing resources and coping with the extreme climatic conditions and incredibly short growing seasons of the tundra biome. Perhaps even more surprisingly, global rules hold up extremely well in the tundra: the same two dimensions explain the majority of trait variation.

For an even longer answer, you’ll have to read the paper: Global plant trait relationships extend to the climatic extremes of the tundra biome, out now in Nature Communications.

Where does this leave us? Our study suggests that trait relationships are not simply emergent properties from global plant trait data, but say something fundamental about the rules that underpin evolution, community assembly, and ecosystem response to environmental change. So from the towering redwood tree to the tiny Arctic heather, global plant trait relationships really do seem to apply across the broad spectrum of plant life on Earth. The holy grail of plant ecology may indeed be within reach.

“That scientist, unsurprisingly, was me.” 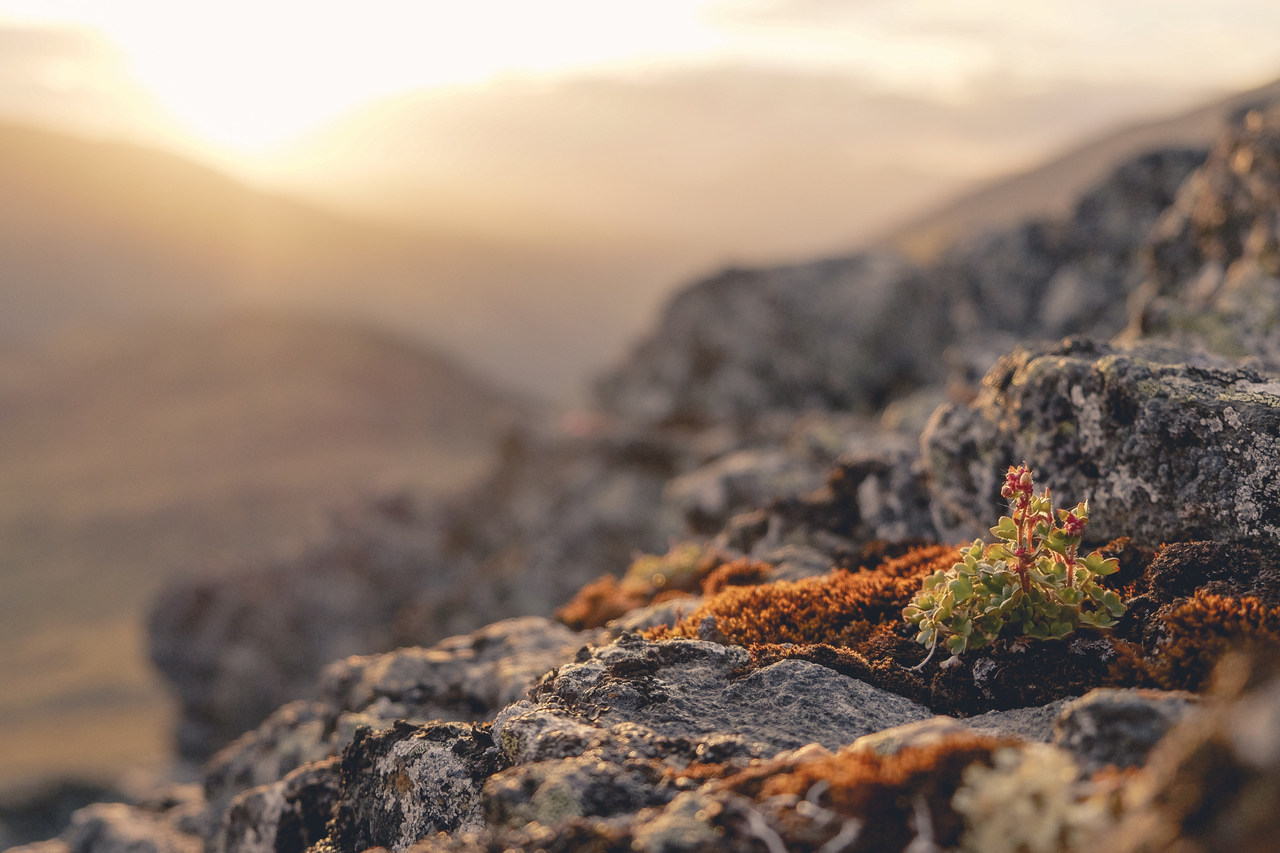 Plant life on the edge