Digging Up Neanderthals in Paradise

Excavations at the Gruta Figueira Brava site on Portugal's Atlantic coast reveal a Neanderthal shell midden rich in the remains of molluscs, crabs, and fish, as well as terrestrial food items.
Mariana Nabais
Researcher, University College London
Follow
Like Liked by Ricardo A Melo and 6 others
0

The subsistence base of coastal Portugal’s Last Interglacial Neandertals was as broad as that of present-day humans.

Most people think of Neanderthals as stout and robust fellows with ugly faces, living in very cold and unpleasant environments. They are commonly portrayed as just-scraping-by in damp caves, feeding on woolly mammoth and other denizens of the steppe-tundra. No sophistication of any kind is ever associated to such brutes, so people do not even dare to consider the possibility of finding them in a paradisiacal landscape like the most beautiful Atlantic coast of Portugal.However, many hints to the effect that Neanderthals were no such beasts have been available for long. In 2010, a bunch of archaeologists led by Dr João Zilhão decided to tackle such prejudiced ideas. And so it was that a research project started in Gruta da Figueira Brava, a lovely cave facing a bright blue ocean, in the Arrábida Nature Reserve, a one-hour drive south of Lisbon.

For three years afterwards (2011-2013), we spent the whole month of May in a deactivated hotel 5-min walk away from the site. But not all was easy. Everyday, to get to the cave, we had to roll down an electrical extension of about 2000 metres, climb down a vertical escarpment and then get through the tightest tunnels inside the cave system – if you were an athlete with broad shoulders, you would not make it to the hall where we dug! Inside, there was room for two people only (eventually, in the last field season, three would fit). By the end of the day, bags of sediment and all the finds had to be carried back to the top of the hill so they could be processed in the field lab put up in the team’s lodging facility.

Everyday there were exciting news. Loads of shells would come out, large ones! The sediments were full of little shell fragments alike the known Mesolithic shell-middens. Then, there was this large fish vertebra, a shark it was. And then, there were many more fish remains. And as if this was not enough, we found crab pincers. Our studies show these claws were from crabs with a carapace mean size of 16 cm! Finally, loads of charred pine nutshell. But no kernels; of course not, they ate them!

Needless to say, these finds were in close stratigraphic association with Neanderthal tools, with other land and aquatic mammals and birds that showed butchery marks. Even though no intact hearth features were preserved, there was plenty of evidence from the bones, the shells and the pine nuts that the meat was cooked and the pine cones were roasted. And the dating of the deposits confirmed a MIS 5b-5c chronology, during the second half of the Last Interglacial, when climate and the local environment were similar to what we have today. So no super cold environments here.

Yes, Neanderthals still took shelter in caves, but they were most definitely enjoying their beach days. They were certainly delighted with their mussels, clams and limpets. They were eating fish on a regular basis, and feasting themselves on large brown crabs. Of course they would still eat meat from goats and deer, and nibble on tortoises and birds. They had an extremely varied diet, and they were perfectly adapted to a coastal setting where they would profit from both land and aquatic resources. They were masters of an ecotonal environment that would give them all they needed to thrive. These are all traits that are traditionally associated with Homo sapiens: “modern behaviour”, as the academia likes to call it. But what we see now is that Neanderthals did the same. Sure thing, they might have had a different material culture, the same way we do nowadays from country to country. But in their essence, they were the same as Homo sapiens and to who we are today. Were Neanderthals cognitively inferior in any way? No, I do not think so… 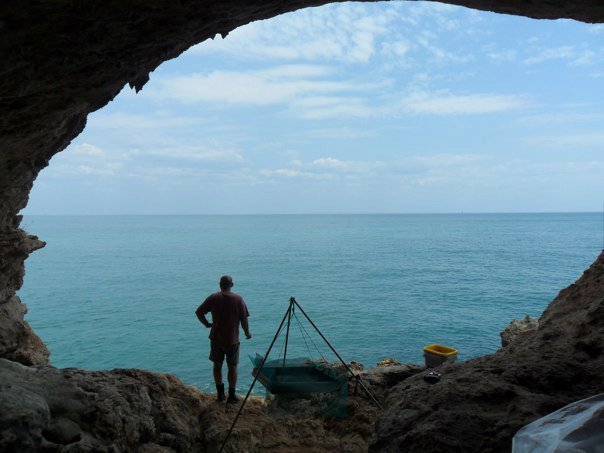 Digging Up Neanderthals in Paradise

Excavations at the Gruta Figueira Brava site on Portugal's Atlantic coast reveal a Neanderthal shell midden rich in the remains of molluscs, crabs, and fish, as well as terrestrial food items.