Could birds’ innovative behaviors save them from extinction?

I have always been fascinated with bird behavior. Although few people would dispute the amazing diversity of colors and songs produced by birds, those who spend time observing them are often also amazed by the diversity of behaviors that they exhibit. In some species, these behaviors are relatively fixed, but other species are remarkably flexible, and exhibit problem-solving abilities that rival those of a primate. In a number of cases, these behavioral innovations allow birds to respond to new environmental opportunities or challenges. For example, in Barbados, some bullfinches (Loxigilla barbadensis) open sugar packets on café terraces to take advantage of this new food source. Opportunistic carrion crows (Corvus corone) have been observed opening nuts or shells by dropping them on highways and waiting for cars to run them over. And to give but one more example of a remarkable innovative behavior, green herons (Butorides virescens) have been repeatedly observed using bread or insects as bait to catch fish – a behavior also observed in other herons and several gull species.

Corvids, raptors and gulls are among the most innovative birds. Here a common raven, a red kite and a kelp gull dropping a mussel to break it on hard rocks.

Louis Lefebvre, the last author of this study, has been so interested in the how birds use behavioral innovations to find food that he has spent the last 20 years combing through the literature, searching for evidence of foraging innovations in the wild (while also conducting field research on bird behaviour in Barbados). Thanks to the tireless dedication of bird watchers from around the world that have reported these novel behaviors, he has been able to compile a database of over 3,800 bird innovations. These innovations range from simple innovations that document the incorporation of a new food item into their diet (e.g., a Northern cardinal (Cardinalis cardinalis) consuming nectar from shrimp plants), to complex, “technical” innovations that demonstrate the impressive problem-solving abilities of some bird species as in some of the examples mentioned above.

Gulls are particularly innovative, including the Pacific gull, attempting here to prey upon a greater crested tern in Kangaroo island, South Australia, an unusual behavior for this species.

Although reading about the innovative abilities of birds always amazes me, these abilities may have serious implications. Currently, species from across the world face an unprecedented challenge, as a consequence of anthropogenic threats like habitat destruction, overhunting, and invasive species. As a result, 13.5% of bird species are now threatened with extinction. However, other species have been unaffected by these changes, and some species are thriving. Several factors are already known to contribute to these disparities. For example, long lived species are often at higher risk, as they also tend to reproduce more slowly and later in life and need more time to recover from population collapses. In addition, the ability to innovate has been hypothesized to contribute to species persistence in the face of environmental change. But can the ability to develop novel behaviors really buffer species against extinction? Addressing this question is particularly challenging: how can researchers measure a species ability to innovate in a way that facilitates comparisons across species, and determine whether a given species is more (or less) innovative than another species? If, instinctively, a raven seems to be better able to devise new behaviours than, say, a partridge, how can this be formally measured? Louis’s bird innovation database was the perfect resource to address this question.

We therefore used our unique dataset that includes information about the innovation rate, life history, geographic range, and ecology of 8,600 bird species. When controlling for factors such as life history, niche breadth, phylogenetic relatedness and research effort, we found that both the ability of a species to innovate and the rate at which it innovates are negatively associated with extinction risk; innovative species are less likely to be threatened with extinction and more likely to have stable or increasing populations.

In some ways, this result is surprising- some of the most innovative species are also those that are the most threatened by anthropogenic threats (e.g., many primates, cetaceans, parrots). One factor that contributes to this effect is life history; innovative species tend to be long-lived species with a low reproductive output, which can lead to them being more endangered- a factor that we controlled for in our analysis. However, we also wondered whether innovativeness may buffer species against some threats- like habitat destruction- but do little to guard against other types of threats – like direct exploitation by humans. By using the threat categories from the IUCN, we therefore also determined whether innovativeness reduces extinction risk for species exposed to each of three threat categories: habitat destruction, overexploitation, and invasive species. We found that whether or not innovativeness improves species performance varies depending on the nature of the threat– apparently behavioral innovativeness improves species performance in the face of habitat destruction, but can do little to affect the performance of species that are threatened by direct overexploitation by humans or impacted by invasive species.

Cetaceans and primates, despite their high behavioral innovativeness, are often at high risk of extinction because of their slow life history strategy. Here on the left a group of killer whales off Vancouver Island, Canada, and Hector’s dolphins in Porpoise Bay, New Zealand. On the right, a chimpanzee in Bossou, Guinea, and a Celebes crested macaque in the Tangkoko National Park, Sulawesi, Indonesia.

In a rapidly changing world, extinction is a very real risk for a variety of bird species; our results highlight the fact that behavioral innovativeness can play a role in reducing this risk, apparently by allowing birds to better cope as their native habitats are altered or destroyed. On the other hand, poorly innovative species are particularly sensitive to habitat destruction and therefore deserve special attention from conservationists to survive current environmental changes.

I am very grateful to Jayna DeVore for her help in writing this post. 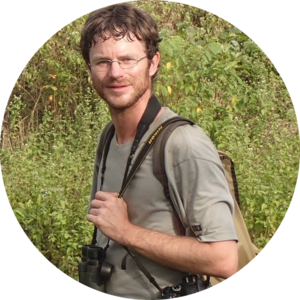