Using marine predators to inform us about future ecosystem changes

When we think about the oceans and their inhabitants, most of us think about large marine vertebrates (sharks and other large fish, sea turtles, sea birds, and marine mammals). These species have captured our imaginations for centuries. They are relatively easy to observe (at least in comparison to smaller forms of marine life), they are found along all coasts and across the oceans, and they are an integral part of many cultures around the world. We have used them as sources of food and other commercial goods, entertainment, and inspiration for art and literature.

Direct and indirect exploitation of these taxa by humans has dramatically impacted the populations of many of these species. During the last two centuries, humans have been responsible for driving some species near extinction (e.g. vaquita and Northern right whale), or have caused the extinction of others (e.g. Steller sea cow and Caribbean monk seal). On the other hand, there are some remarkable success stories. Some species have recovered after the ending of their commercial exploitation (e.g. Northern elephant seal and humpback whales), in some cases bouncing back to, or near, their pre-exploitation levels. This exploitation-recovery dynamic poses two different scientific and conservation challenges: while we need to make efforts to protect species that are still threatened, we also need to understand the impact that recovering populations might have on their ecosystems and human activities. Our lack of understanding of the ecological role that these species play in their ecosystems hinders our ability to both protect species that need it and anticipate the changes we can expect to see as populations recover.

Marine ecology and oceanographic research have been traditionally focused on lower trophic levels. The golden era of oceanographic discovery (late 19th and 20th centuries), when we advanced our knowledge on how marine ecosystems are structured and function, coincided with the time when large marine predators were being, or already were, decimated. Perhaps as a consequence, marine ecology and oceanography have embraced a bottom-up view of the ecosystem and have focused less on top-down mechanisms. During the last decades, our community (that is large marine vertebrates ecologists) has contributed significantly to shifting the old paradigm that top predators are of limited relevance to the marine ecosystems. We are seeing increasing evidence of their importance and the ecological services they provide.

A very popular concept (at least among ecologists working with large marine predators) is that these species can be used as ecological sentinels that inform us about the status and health of marine ecosystems. And that idea makes sense. Most of these species are top predators, so they integrate information about the mid- and lower trophic levels in the ecosystems. They tend to be large and long-lived, therefore they need an important amount of food to sustain themselves (particularly for species with elevated metabolic demands, like homeotherms), and their distributions reflect the distribution of their prey.

With a population estimated in several millions, the crabeater seal is the most abundant species of marine mammal in the world (Photo by L. Pallin)

The crabeater seal (Lobodon carcinophaga), the most abundant species of large mammal after humans, is a conspicuous Antarctic mesopredator of the pack ice zone. Its evolution and success has been tightly linked to their prey, the Antarctic krill (Euphausia superba), a small shrimp-like crustacean that constitutes prey to an extended community of predators (fish, penguins, flying seabirds, seals and whales, among others) and is a key component of the Antarctic food webs. Crabeater seals display one of the higher degrees of dietary specialization in a mammal; more than 98% of their diet is composed of krill. Evidence of this high specialization is the intricate shape of their teeth, which are used as sieves to filter krill out of the water. This high dependence on krill also means that the distribution of crabeater seals is controlled by the presence of krill and, in turn, we can use the seals’ movement and at-sea behavior to infer areas where krill occur.

Crabeater seals (Lobodon carcinophaga) are highly specialized predators of Antarctic krill (Euphausia superba). Their specially adapted teeth allow them to filter krill out of the water (Photo by D. Costa)

In our new paper entitled "Projected shifts in the foraging habitat of crabeater seals along the Antarctic Peninsula", published in the journal Nature Climate Change, we put together a multi-disciplinary team of marine ecologists, oceanographers, and modelers, to combine data on movement and diving behavior of crabeater seals along the western Antarctic Peninsula with environmental data (either collected by the instruments on the seals themselves, remotely sensed, or obtained from an oceanographic model available for the area), to build a habitat model that informs us about the areas that crabeater seals use to forage on krill.

Our modeling approach deviates from the most common studies based on satellite telemetry: we used the presence of dives (not just the movements) as the variable of interest. This is important because by using the location of the dives we are making sure that our model reflects foraging behavior only (crabeater seals only dive to catch prey, while resting and travel activities only occur at the surface). We are also incorporating the vertical dimension in our analyses. While traditionally we have used surface environmental variables as covariates in our models, marine predators forage in a three-dimensional environment. Therefore, the environment at depth plays a role in the distribution of prey (and consumers) that has not been properly addressed due to the difficulties of sampling the water column at relevant scales.

Map of the western Antarctica Peninsula (WAP). The figure shows the location of important landmarks in the study area, as well as the break of the continental shelf (illustrated as light blue colors), and the location of the southern front of the Antarctic Circumpolar Current (ACC, orange), and sites on intrusions of Circumpolar Deep Water onto the shelf.

This study was carried out in one of the areas of the world experiencing one of the fastest rates of environmental change, the western Antarctic Peninsula, or WAP. The WAP has been the focus of a significant number of studies aimed at understanding the ecological consequences of the accelerated changes affecting the area. Yet we have a limited understanding of how future changes are going to impact krill and the community of predators that depend on this crustacean, which also includes penguins, flying sea birds, whales, and fur seals. By using our model, we were able to project future changes in the areas that crabeater seals use to forage and, given the inextricable link between the seals and their prey, infer changes in the distribution of krill.

Future changes include a southward shift in the foraging areas (and inferred krill distribution) along the WAP, a trend that has been already observed for krill during the 20th century by Atkinson et al. accompanied by an expansion towards offshore waters. These changes are particularly relevant to the other krill-predators: penguins and fur seals must return to their on-land colonies to feed their offspring, and their colonies are concentrated in the northern WAP. Other predators, such as whales and flying sea birds, will have to travel longer distances to reach the areas where krill will concentrate. Krill biomass, on the other hand, has been predicted to decrease in the future, which will likely decrease their density as their habitat also expands offshore.

It is unknown to what extent Antarctic krill predators, specially crabeater seals, can compensate by switching to other prey (e.g. fish), but it is clear that the entire predator community will have to incur elevated energetics costs due to the greater travel required to reach their foraging grounds.

Our findings shed light on important ecosystem-levels alterations as a consequence of climatic change in a vulnerable region of the planet. But we also provide evidence that large marine vertebrates can be used to provide information about their ecosystems. These species are conspicuous members of marine ecosystems and, as such, they are responding to changes across the trophic web and can provide important ecological information about the extended community.

It is still uncertain how the crabeater seals and the extended krill-based predator community will respond to the accelerated environmental changes along the WAP (Photo by S. Villegas-Amtmann)

This research began as part of the United States Southern Ocean GLObEC program and was funded by the Office of Polar Program of the National Science Foundation, the National Undersea Research Program and the National Oceanographic Partnership through the Office of Naval Research. Additional support was provided by CONICYT-Fulbright (Chile), E&P Sound and Marine Life Industry Project of the IAGOP, CONICYT and FONDAP (Chile).

Luis Huckstadt
Assistant Researcher, Institute of Marine Sciences, University of California Santa Cruz
Follow
I am an Assistant Researcher at the Institute of Marine Sciences at the University of California Santa Cruz. My research is motivated by my interest in understanding the role that large predators, particularly marine mammals, play in marine ecosystems, especially in those areas more susceptible to human-induced climatic change, such as high latitude and polar marine systems. To help to answer these questions, I use Biologging technologies and Stable Isotope Analyses, in order to understand the at-sea behavior of marine top predators. 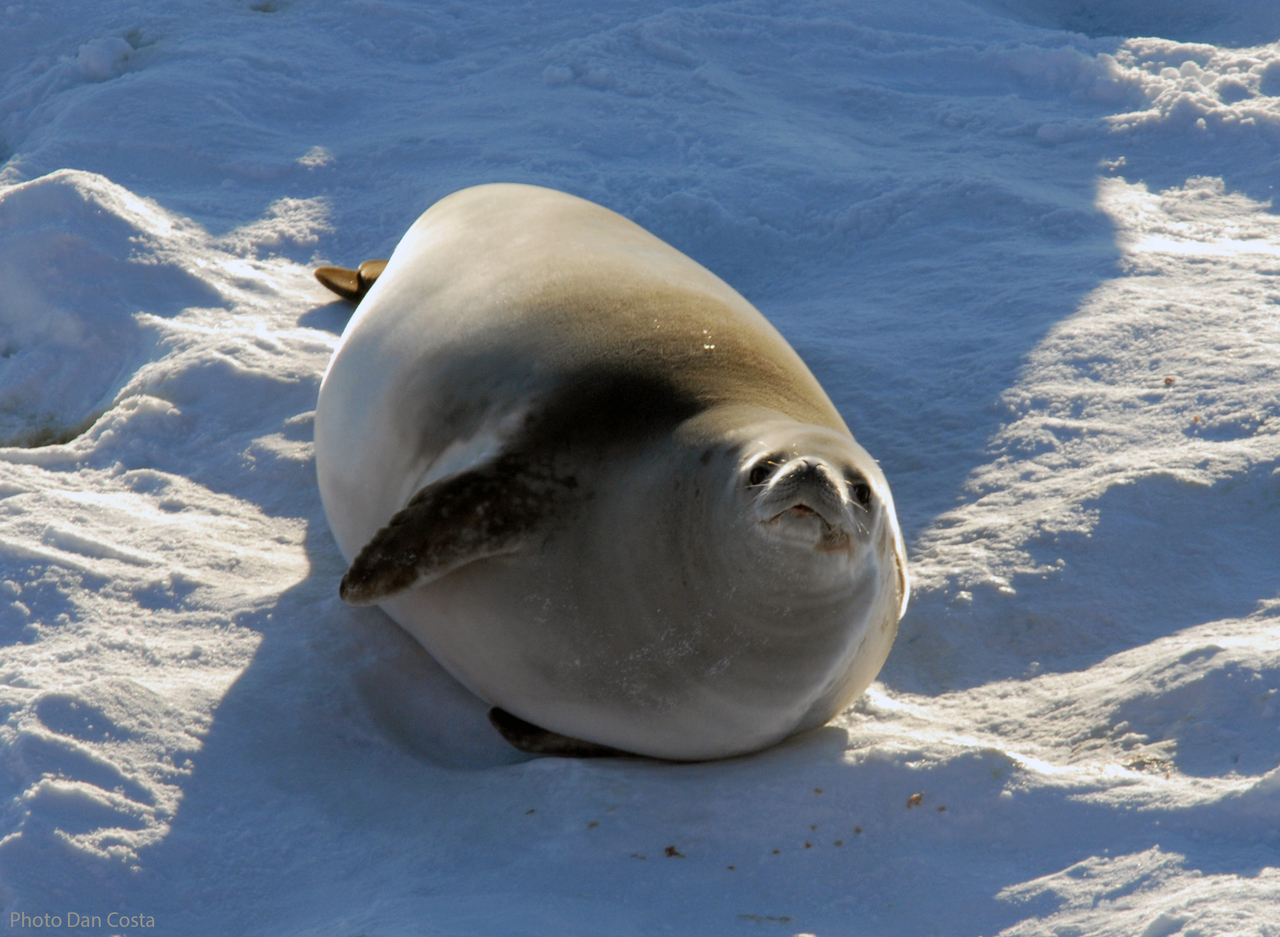 Using marine predators to inform us about future ecosystem changes

by Luis A. Hückstädt, Assistant Researcher at the Institute of Marine Sciences, University of California Santa Cruz