Collaboration is key to observing animals in the deep sea

The first time I set foot on the Monterey Bay Aquarium Research Institute’s (MBARI) research vessel Western Flyer was an early morning in June of 2013—I was two weeks away from finishing my undergraduate degree, and I had never been on a ship this large.

The first person I bumped into as I excitedly stumbled through the cramped, dimly-lit passageways was Ben Erwin, who pilots one of MBARI’s deep-diving robots, the remotely operated vehicle (ROV) Doc Ricketts. I did not know it at the time, but the work I would do at MBARI that summer, and indeed in my future graduate research at Stanford University, would hinge on collaboration with Erwin and MBARI’s other ROV pilots.

The reason I was on the ship that morning was to start a summer internship with the Midwater Ecology Lab—a group led by MBARI Senior Scientist Bruce Robison. Robison and his team pioneered the adaptation of ROVs to study the behavior and ecology of animals in the deep pelagic zone—a dark, cold, high-pressure world over 200 meters beneath the surface of the ocean. Although this realm is the largest inhabitable space on Earth (comprising roughly 93% of the biosphere), it is mainly unexplored due to its inaccessibility. Many basic questions about its inhabitants remain largely unanswered: who are they, what do they do, and how do they do it?

Prior to the use of ROVs, scientists relied on nets and sound to learn about animals in the deep pelagic realm, a habitat also referred to as the midwater. But these research methods are limited in terms of the information that they can provide. As Robison and colleagues wrote in a 2017 article in the journal Oceanography, “with our ROVs as platforms for observation, we have published a series of papers that define a new discipline of midwater research—animal behavior.”

Robison and I recently published a paper suggesting that midwater animals can use visual signals to convey detailed information, even in the darkest depths of the ocean. In this study, which appears in the journal Proceedings of the National Academy of Sciences, we examined video footage collected using ROVs to show that a deep-living social squid (the Humboldt squid, Dosidicus gigas) may visually communicate by combining complex pigment patterns with whole-body, bioluminescent backlighting. We think that, by turning themselves into giant e-readers, these squid can convey information similar to that conveyed by turn signals, brake lights, bumper stickers, and horns in traffic—intent, warnings, and social information.

This discovery was only made possible by observing Humboldt squid in their deep daytime lair using ROVs. Like many midwater animals, they are not amenable to being studied in captivity, as they live their entire lives without coming into contact with a hard surface. Imagine their confusion when these strong swimmers encounter the walls of a holding tank in a lab—most quickly perish from repeated impacts as they attempt to escape.

So what is it like to use a high-tech underwater robot to study the behavior of midwater animals? That June morning in 2013, I quickly learned the protocol that is executed by the ROV pilots, the captain and ship’s crew, and the scientists, every day on an MBARI Midwater Ecology research expedition. It is a well-rehearsed ballet that features midwater animals as the lead performers.

Imagine trying to film bats flying around a forest at night through the dashboard camera of a remotely controlled delivery truck from a kilometer away. This is essentially the task at hand when using ROVs to observe animals in the midwater—with some added complications. The ROV is tethered to a support vessel (in this case the Western Flyer) by a long fiber optic cable through which high-definition video footage, navigation information, and hydrographic data are relayed. Thus there are three large pieces of equipment to dynamically coordinate once the ROV is plunged into the water—the ship, the tether, and the vehicle.

This is a complicated process, even under tranquil conditions. But winds and currents in the ocean add extra layers of difficulty. Monterey Canyon, the primary area of MBARI’s ROV-based research, lies in the heart of the California Current in the eastern Pacific Ocean. Like a river, this massive wind-driven ecosystem has swirls and eddies, shallow currents and deeper currents. During ROV operations, the support vessel is often pushed by surface currents and wind while the tether and ROV are pulled by deeper currents, which may flow in the opposite direction.

Under these conditions, the ROV pilots, while battling the push of currents and the pull of thousands of meters of cable, must keep the ROV steady while we scientists focus the ROV’s camera on dynamic packs of human-sized Humboldt squid. With luck we can capture footage of the squid as they display pigment patterns while hunting finger-length lanternfish, five football pitches beneath the ocean’s surface.

Like a football match, an ROV dive is a collaborative endeavor. The pilots and scientists sit side-by-side in a dark control room onboard the ship, and are in contact with crew on the bridge of the ship. All three parties are constantly communicating during a dive to facilitate the research objectives—in this case, recording the visual behaviors of groups of foraging Humboldt squid. Together, we must coordinate the changes in the course of the ROV, the movement of the ship, and the length of the tether, so that we may continue to collect precious footage of these spectacular animals communicating in their natural habitat.

Since my summer internship in 2013, and throughout my PhD program, I have had the immense privilege of leading ROV-based research with Robison and the Midwater Ecology Lab—work that is only possible with the support and collaboration of MBARI’s ROV pilots, captains, and ship’s crews, not to mention the financial support of the David and Lucile Packard Foundation. The vast archive of deep-sea footage that MBARI has and continues to collect provides an absolutely critical resource for understanding the behavior and ecology of midwater animals. Slowly and incrementally it is revealing the spectacular adaptations that life has evolved in this otherworldly habitat. 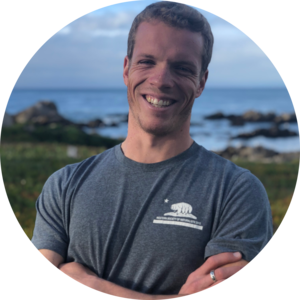 Richard Schwarz
over 1 year ago