Naturally occurring (geogenic) groundwater arsenic contamination is a problem of global significance, with noteworthy occurrences in large parts of the alluvial and deltaic aquifers in S/SE Asia. Consumption of water extracted from these aquifers threatens the health of tens of millions.

To tackle this problem tremendous research efforts have been dedicated over the last two decades to better understand the sources and distribution of arsenic-polluted groundwater. However, much of this research was focused on the often very detailed geochemical characterisation of sediments and porewaters while paying less attention to the role of physical flow processes for explaining the often highly variable spatial distribution of arsenic in groundwater systems. Within the same village clean water can sometimes be found just a short distance away from a highly polluted well.

Against this backdrop, we set out to use (numerical) reactive transport modelling to integrate much of what has been learned over the years into computer simulations that mimic the complex interactions between groundwater flow, solute transport and geochemical reaction mechanisms. In other areas of contaminant hydrogeology reactive transport modelling has previously shown to be a highly valuable tool to analyse field observations, to unravel which chemical and physical processes play a role, and to predict the behaviour of contaminants within aquifers – where and when pollution might occur in the future. However, especially given the significance of the arsenic problem, we felt that not enough efforts had been made in the past to steer away from more descriptive studies towards a process-based quantification of arsenic release and fate. With both of our Swiss collaborators, Michael Berg and Rolf Kipfer, having closely studied arsenic pollution at various sites in Vietnam and Bangladesh and both of them spending their respective sabbaticals in sunny Australia, the idea emerged to collaborate on the analysis of previously collected field data from one particularly suitable site.

The field site that we identified for our modelling study was a highly arsenic polluted and well characterised site about 20km south of Hanoi (Vietnam). As a first step, we set up a numerical groundwater flow and transport model along a transect that, starting at the interface between the Red River and the Holocene aquifer underlying Van Phuc village, followed the groundwater flow over several kilometres. We then used the tritium that entered the groundwater system from the atmosphere during nuclear bomb testing in the 1960s, and its decay product helium, a noble gas, to reconstruct how fast and where the groundwater was moving over the last five decades. Once the model simulations were able to match the concentrations that were measured, additional groundwater constituents and geochemical processes were succesively added to the model in order to simulate how arsenic was mobilised and transported in the groundwater. Of course, this is only the short version of the story, while the actual modelling work involved many obstacles and conceptual models that turned out to be fata morganas.

From the beginning of the work a key hypothesis was that the changes in groundwater flow that occurred over the past 50 years since the city of Hanoi started to increase the extraction of groundwater to satisfy its steadily increasing water demand, were the main trigger for the high concentrations that were observed below Van Phuc. Eventually our numerical model allowed us to pinpoint the source of arsenic to the river muds that are regularly deposited at the more slow-flowing zones of the Red River. The organic matter contained in those muds fuels a variety of biogeochemical reaction, most importantly the reductive dissolution of iron oxides, which explains the release of arsenic and a km-long transport into the aquifer underlying the Van Phuc village. What we also found was that this release mechanism and the persistence of the river-groundwater interface as biogeochemical reaction hotspot requires some re-fuelling by a re-occurring deposition of sediments that are enriched in organic matter, Fe-oxides and arsenic.

At the end we constructed a simpler surrogate model of our field-scale model and ran it in predictive mode to illustrate the interplay of the four key factors that we found to control the occurrence and longevity (abundance of reactive organic matter; abundance of iron oxides; magnitude of groundwater flow; river mud deposition rate) on the evolution and longevity of arsenic release at surface water/groundwater interfaces.

Ancient Fish and a Global Freeze 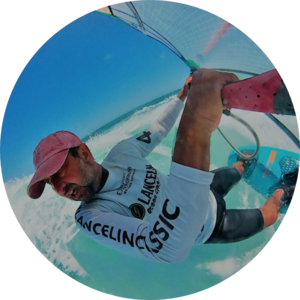 I am a Research Professor with the School of Earth Sciences at the University of Western Australia (UWA) and a Principal Research Scientist and Team Leader at CSIRO Land and Water (Australia). I received my Dipl.-Ing. degree in Civil Engineering from the University of Stuttgart and a PhD in Environmental Engeneering from UWA. Together with my research group I am mainly working on the development and application of reactive transport models to a wide range of groundwater quality issues. I have a strong interest in integrating hydrological, geochemical and microbiogical datasets to derive a process-based quantification of redox processes and the associated fate of organic and inorganic pollutants at both the laboratory and field-scale.
Follow