Preserved fiber and pigments on an eagle talon from Krapina

Krapina, a famous Neandertal site in northwest Croatia, was excavated under the direction of Dragutin Gorjanović-Kramberger between 1899-1905. Based on the fauna and geology, he thought the site was from the last interglacial and it is now dated to 130,000 years ago. Gorjanović-Kramberger was a man way ahead of his time. The site was dug following a stratigraphy and many of the human remains, animal bones and tools were labeled according the level where they were found.

He tested the antiquity of the Neandertal remains by comparing their chemical signature to bones of extinct animals, was first to use X-rays to analyze the fossils, documented evidence for cannibalism and saved a tremendous amount of material from the site. This was fortunate since the original sandstone rock shelter and sediments in it no longer exist. Gorjanović-Kramberger extensively published about the site and in 1906 produced a long descriptive monograph, primarily on the human fossils. He also allowed scholars to study the material and up to 2006 more than 3000 references exist for the Krapina material. One might think that there is little more to tell about the site, but new ideas, new technologies and new people have added a lot.

In 1986 I began my work at the Croatian Natural History Museum by documenting toothpick grooves in the numerous isolated teeth. These result from constantly probing the inter-dental spaces, eventually leaving a groove at the crown/root junction. I worked with Mary Doria Russell, then a paleoanthropologist, but now a well known science fiction and historical fiction writer (e.g., The Sparrow; A Thread of Grace). The work on toothpick grooves was followed by studying scratches on the lip surfaces of incisors and canines. When they occur in high enough frequency, they indicate if the person was a right- or left-hander. This work was done with Carles Lalueza Fox, now one of the premier researchers of ancient DNA and proteomes. It was really great working with these two people and I have many good memories of the time we spent together. My later work involved describing cut marks up the forehead of the most famous Neandertal specimen from the site, Krapina 3, with my friend Jakov Radovčić, then the curator of the collections, and some other colleagues. Milford Wolpoff, my advisor from Michigan, found the frontal fragment in the collections and placed it on Krapina 3, about seventy years after it was found as an isolated bone.

The marks appear to be related to some kind of ritual since they do not match the patterns seen in cannibalism, secondary burial preparation, animal trampling or measurement damage.

I have known Jakov and his family for more than 40 years. When I was working on the toothpick paper, we used to collect his daughter, Davorka, from the kindergarten near the museum. We dumped her off in the garden near a bar and she played while we smoked, drank beer and talked about Neandertals and solved world problems. I remember her as a really cute kid. In 2013 she was not a kid anymore and with a PhD from Michigan from Wolpoff, she took over the curator position from her father. She did a complete inventory of the Krapina material and in 2014 emailed me that she found eight eagle talons with cut marks on some of them. Discovered together in the top level at the site, they seemed to be part of a necklace or bracelet or rattle. The talons had been studied before, beginning in 1912, so I was a little skeptical.

When I arrived in Zagreb and looked at the set of eight talons plus the phalanx, I was stunned - the cut marks were so clear. How could they have been missed for so long? Along with the incisions there were polished areas along the sides of many of the talons, some eburnated areas of dense compaction on a few, nicks on some of the plantar edges and some apparent pigmented areas. In one cut mark, sealed by a silicate layer, was an undulating fiber. Found on talon 386.1 this was really exciting, but also posed a conundrum about how to analyze the fiber without destroying it.

After various attempts, Davorka found Giovanni Birarda and Lisa Vaccari at the Synchrotron Infrared Source for Spectroscopy and Imaging – SISSI, Elettra - Sincrotrone Trieste, Italy. They are specialists in forensic infrared analysis and after long sessions, Giovanni determined that the fiber was animal, not plant. Because of the young age of his comparative scales, he could not identify the specific animal. This is a different kind of fiber than described last week in Scientific Reports by Hardy et al. from Abri du Maras in France. Theirs was twisted string of conifer origin, ours is from an animal. The type animal is not specified, but certainly some future workers with new techniques will more specifically identify the fiber and provide more information about it.

Besides the fiber Giovanni and Lisa analyzed some pigment stains on talon 386.1. These are orange and black colors that are found in various areas of the talons. First, the black stains. We assumed they were manganese dioxide, a common pigment used by Neandertals elsewhere. But, their infrared reflection indicates they are carbon, likely from the fireplaces Gorjanović-Kramberger documented in the top level at Krapina. It is unclear if the black stains were accidental or intentional, but the talon shows no evidence of burning and the black staining occurs on many other places of talon 386.1. It is also on most of the other talons and none of them show signs of burning, so we think it is likely that the carbon was intentionally applied. The orange stain is another matter --- Giovanni determined it is a mixture of red and yellow ochres. These ochres do not naturally exist in the cave deposits and must have been collected elsewhere and intentionally applied to the talon by a Neandertal. It is also possible the red and yellow pigments were transferred from other elements of the ornament, but they are clearly of human origin, not a natural coloring from the cave sediments. There are other cases of Neandertals using red ochre, so this adds to the ever increasing inventory of Neandertal sophisticated behavior, something many erroneously consider unique to the modern humans who replaced them.

None of this would have been possible without the collecting skills of Dragutin Gorjanović-Kramberger more than 100 years ago, without the observant Davorka Radovčić who recognized the cutmarks on the talons or without the forensic infrared work of Giovanni Birarda and Lisa Vaccari. It was a serendipitous coming together occurring over a century. I was lucky to be involved in this and my other research at Krapina and to work with these scholars, young and old. I look forward to new developments --- there should be plenty. 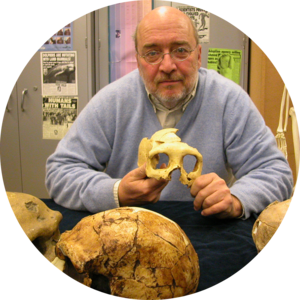 Ruth Milne
over 1 year ago

Hi David, thanks for posting. Are you able to add a link to the paper for us?