We discovered that roots of many extinct euphyllophytes branched dichotomously. This suggests that lateral root branching, a characteristic of all living euphyllophytes, is not a defining character of the group, but instead evolved many times independently among ferns, horsetails and seed plants.
Sandy Hetherington
Junior Research Fellow, Magdalen College Oxford, University of Oxford
Follow
Like Liked by Richard Buggs and 1 other
0

Our paper by Alexander (Sandy) J. Hetherington, Chris Berry and Liam Dolan in Nature Plants can be found here.

The roots of extant vascular plants branch in two fundamentally different ways. The roots of living clubmosses (lycophytes) branch in a process termed dichotomous branching. By contrast, the roots of living ferns, horsetails and seed plants (euphyllophytes) branch by a process called lateral root branching. These two different modes of branching result in very different root architectures, with predicted different functions. However, before our investigation it had been unclear when lateral root branching first evolved.

The project started taking shape over a cup of coffee in Chris Berry’s office in the School of Earth and Ocean Sciences, in Cardiff. While I was drinking coffee, Chris was rifling through his reprint collection and handing me copies of old papers with descriptions of Devonian plants preserved with roots attached. One of these papers caught my eye, the description of Lorophyton goense described in 1993 by Muriel Fairon-Demaret and Cheng-Sen Li.

The roots of all living euphyllophytes branch laterally so I therefore predicted that the roots of early diverging euphyllophytes, like L. goense, would also branch laterally. However, what was surprising was that the roots of L. goense were described as dichotomously branched. To verify the original description and to ensure that root branching had not been misinterpreted I travelled to Liège in Belgium to examine the original specimens of L. goense.

The enormous help and hospitality of Dr Cyrille Prestianni allowed me to re-examine the original specimen and take new images of the 380 million year old roots. I verified that root branching was dichotomous, based not only on morphology (the overall shape of the roots) which had been used by the previous authors but also on its anatomy (the internal tissues which were preserved in this fossil).

Roots are preserved as pale grey axes with darker outlines. At the centre of each root was a single vascular trace highlighted with black arrowheads, this trace branched into two prior to root branching (white arrowheads). Splitting of the vascular trace in this fashion prior to the branching of the root is indicative of dichotomous branching as shown in the schematic on the right. Specimen ULG 2057b, scale bars 2 mm. © Sandy Hetherington.

Our re-description of L. goense indicated that not all euphyllophyte roots branched laterally and the roots of some species branched dichotomously. However, was L. goense the exception to the rule or was dichotomous branching common in early euphyllophytes? To answer this question a thorough review of the literature was needed. Evidence for fossil roots from 50 fossil taxa from the Devonian and Carboniferous were identified from 80 papers, the oldest dating back to 1895, and covering worked published in multiple languages.

This work couldn’t have been completed without my funding from Magdalen College, Oxford University, and without the enthusiasm and mentorship of my two co-authors Chris Berry and Liam Dolan. 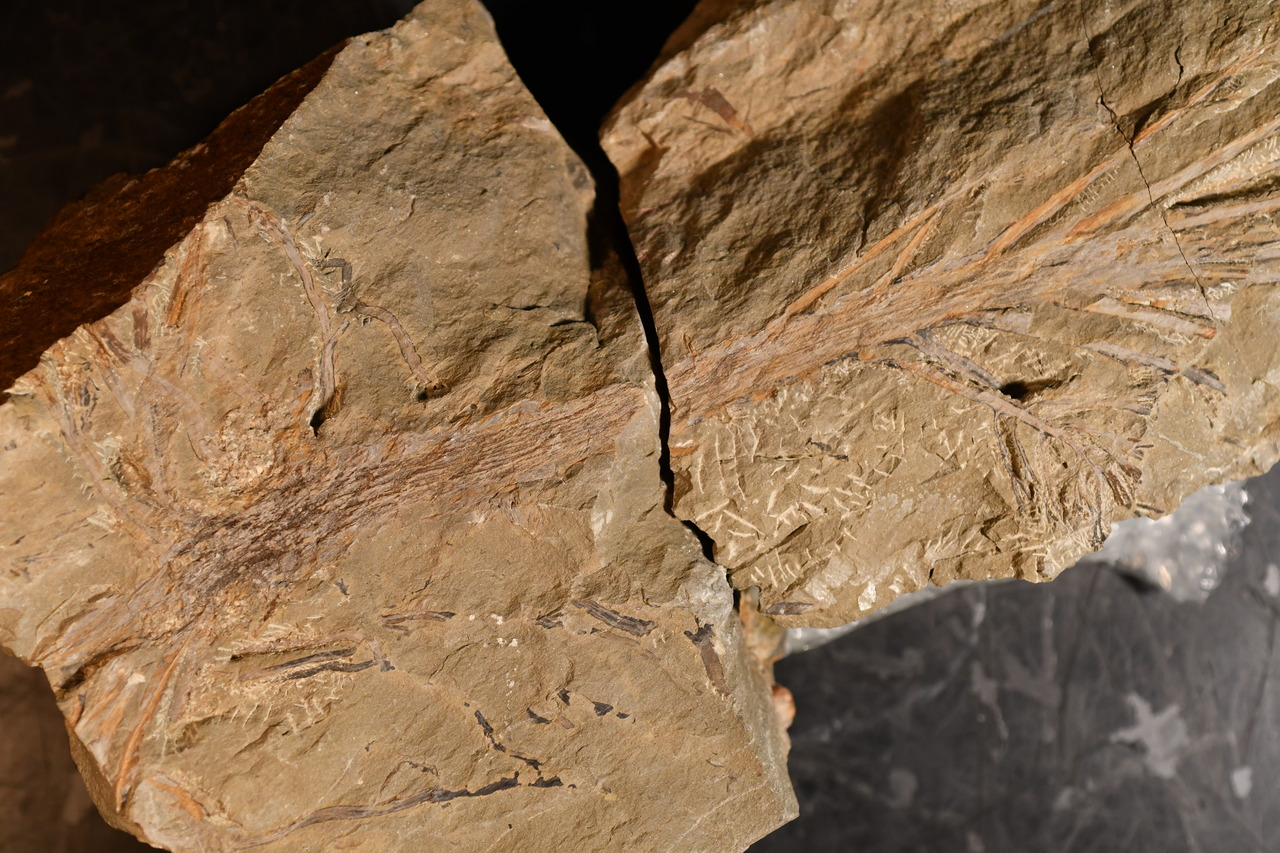 We discovered that roots of many extinct euphyllophytes branched dichotomously. This suggests that lateral root branching, a characteristic of all living euphyllophytes, is not a defining character of the group, but instead evolved many times independently among ferns, horsetails and seed plants.