We discovered that four voltage-gated sodium channel genes are on the Z sex chromosome in snakes. One of these genes, SCN4A, is the major gene involved in the adaptive evolution of tetrodotoxin resistance in garter snakes. Its sex linkage changes how we expect resistance to evolve.
Kerry L. Gendreau
PhD Candidate, Virginia Tech
Follow
Like Liked by Ruth Milne and 2 others

The skin glands of many amphibians contain noxious or toxic chemicals that ward off predators from these otherwise vulnerable, soft bodied creatures. Some animals have evolved the ability to overcome these defenses in order to get a nutritious meal. A major aim of my PhD dissertation is to understand how predators evolve resistance to such toxins by looking at how their genomes have changed over time. More broadly, I aim to understand how genomic information can be used to predict whether an organism can adapt to a particular environmental pressure.

The study system that I am currently working with involves a coevolutionary arms race of toxicity and toxin resistance between newts and snakes. In the western United States, some newts have massive amounts of a potent neurotoxin called tetrodotoxin on their skin. Garter snakes living alongside these newts have evolved resistance to tetrodotoxin through mutations in genes from one particular family: the voltage-gated sodium channels, or SCNs.

Initially, I wanted to know how resistance evolved in these garter snakes by seeing how these SCN genes differed across reptiles. I began by digging through the numerous genome sequences of snakes and lizards that are now available, as well as some unpublished sequences that were generously provided by colleagues. While many of the genome sequences are still draft versions, which means they are split up into many small pieces, the genome sequence of the rattlesnake Crotalus viridis is very well assembled, and what I found from it was surprising and unexpected. Four of the SCN genes were on the Z sex chromosome in rattlesnakes. (Click here for the full published results.)

Unlike most mammals, which have homozygous XX females and heterozygous XY males, most snakes have homozygous ZZ males and heterozygous ZW females. So, if these SCN genes are on the Z sex chromosomes in snakes, this could mean that females only have one allele copy, while males have two. To see if this was the case for garter snakes, we designed DNA tests to determine the sex of the snakes and to count SCN gene copy numbers. We concluded that four SCN genes are indeed Z-linked in garter snakes, and that ZW females are hemizygous and have only one copy of each of the genes, while ZZ males have two.

This finding is interesting for us and our colleagues working on this system because it has implications for how resistance evolves in snakes. In comparison to autosomal genes, sex-linked genes can differ considerably in their evolutionary rates. Sex chromosomes tend to have higher mutation rates, and most regions of sex chromosomes do not recombine. Selection can also be more efficient in hemizygous garter snake females because they only express one version of the gene.

Sex-linkage also helped to explain a perplexing pattern that our colleagues had observed: most of the snakes that they caught appeared to be homozygous for either toxin resistant or non-resistant alleles in one SCN gene. At the time, it was assumed that this was the result of strong selection acting on the snake populations. After sexing and genotyping snakes from the same sites, we found that only males were heterozygotes, and that hemizygosity in females largely explained these earlier findings.

Although our sample sizes for this study were relatively small, we found some evidence that toxin resistance may be sexually antagonistic (beneficial to females and detrimental to males). In some populations, the resistant alleles were present mostly or exclusively in females. Female snakes tend to be larger and more capable of eating bigger things like the toxic newts. Because mutations that provide toxin resistance also impair muscle function, these alleles may be less favored in males that are less likely to consume toxic newts, but nonetheless maintained because of female hemizygosity.

Our next steps are to test our hypotheses with larger samples sizes, and to see if sex linkage also leads to differences in gene expression across the sexes.

Kerry L. Gendreau
PhD Candidate, Virginia Tech
Follow
My research interests center around using genomic data to predict whether organisms can adapt to different environmental pressures. I am particularly keen on the evolution of nervous systems and cellular communication. In past work I have approached this topic broadly, with projects on Alzheimer's disease in humans, circadian rhythms in mammals, and spider neurotoxins. I am currently a PhD candidate at Virginia Tech and my dissertation research focuses on the coevolution of toxicity in amphibians and toxin resistance in their snake predators. 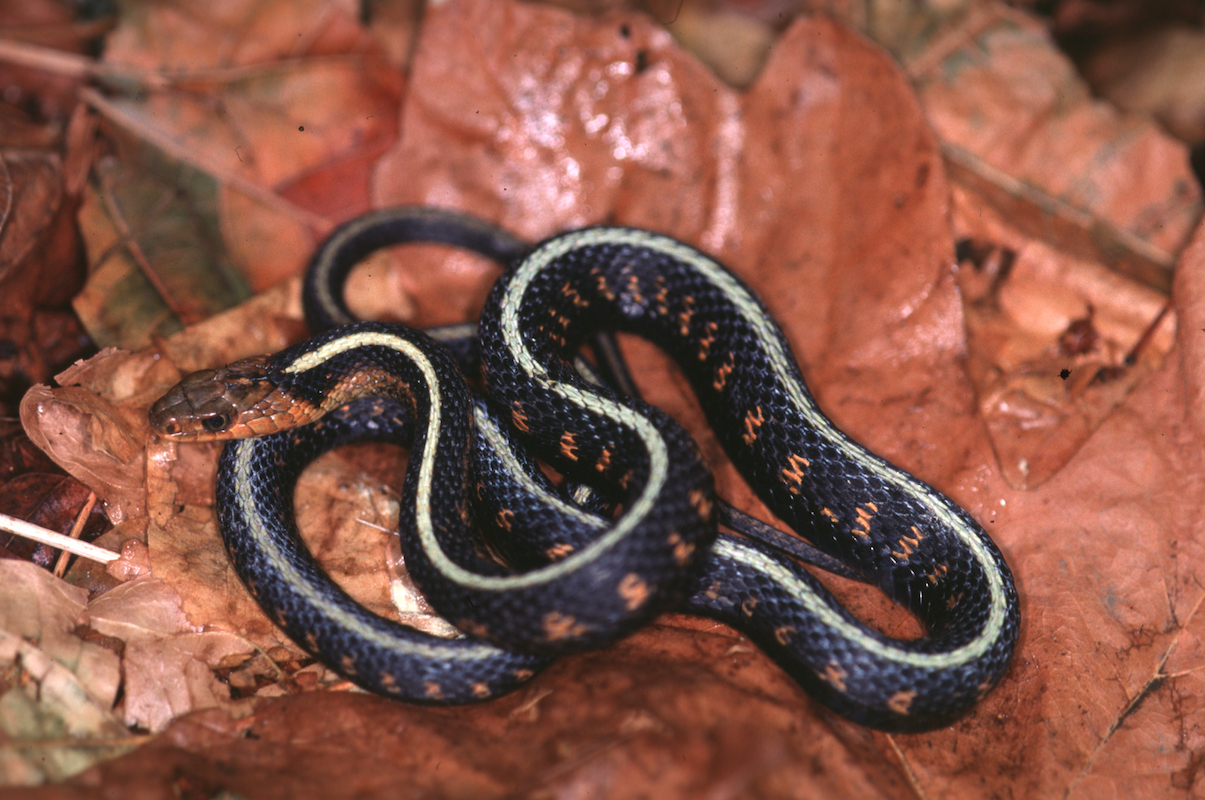 We discovered that four voltage-gated sodium channel genes are on the Z sex chromosome in snakes. One of these genes, SCN4A, is the major gene involved in the adaptive evolution of tetrodotoxin resistance in garter snakes. Its sex linkage changes how we expect resistance to evolve.