Fire has played an instrumental role in shaping ecosystems on land. Evidence for fire activity in Earth’s history can be tracked using the fossil record of charcoal.
Sam Slater
Researcher, Swedish Museum of Natural History
Follow
Like Liked by Patrick Goymer and 4 others
0

The recent spread of wildfires throughout many parts of the world including Australia (e.g. Figure 1), Brazil, California, and even regions north of the Arctic Circle, highlight some of the very real threats we face in a warming world. Although the recent rise in wildfire frequency, intensity and fire season length has been linked to human activity, either directly (arson or accidental burning) or indirectly (through anthropogenic climate change), wildfires also have natural causes and have been documented in the geological record from hundreds of millions of years ago.

The prevalence of wildfires in the geological past is highly variable (e.g. see Glasspool and Scott 2010), with several environmental factors influencing fire activity. Many of these are relevant to today, including temperature, precipitation, humidity, vegetation composition, and lightning activity. Over longer timescales, more exotic factors played key roles in fire prevalence, such as long-term changes in oxygen-levels, and catastrophic events such as massive volcanism and impacts by bolides like asteroids or comets.

The primary source of evidence for wildfires in the geological record is fossil charcoal. This is often found as large pieces of burnt wood (Figure 2a, c, d), but can also be found as microscopic fragments, which are often abundant in sedimentary rocks. Microscopic charcoal fragments can be extracted from rocks by dissolving the mineral material in acids, leaving behind the organic matter, which includes the charcoal. Changes in abundances of charcoal can then be tracked through the rock record, and intervals with increased charcoal abundance are often indicative of time intervals with increased fire activity. The oldest charcoal is late Silurian (~420 million years ago), almost as old as the oldest land plants (Scott & Glasspool 2006). Fire has played an instrumental role in shaping the evolution of terrestrial animals, plants and ecosystems ever since.

Fire is so common in some ecosystems that several plant species have evolved peculiar adaptations to deal with frequent burning. Some plants actually require fire to reproduce. Evidence for this has been found in the fossil record, and includes fossilised conifer cones that ‘intentionally’ catch fire to release their seeds (Figure 2d, e).

One of the most iconic fire-adapted plants today is Eucalyptus, native to Australasia (see Figure 2b for an example of fossil Eucalyptus). In places like Kangaroo Island, South Australia, increased temperatures and aridity, driven by climate change, set the scene for the most devastating fire season the island has seen in recorded history. The drought may have led to such low water table levels that the fires could have scorched the Eucalyptus trees down to the roots; if this is the case, they are not likely to have survived (Figure 1). As the fire season comes to a close, the fires seem to have pushed many plant and animal species to the edge of their tolerance; time will tell how long, if ever, the ecosystem will take to recover. 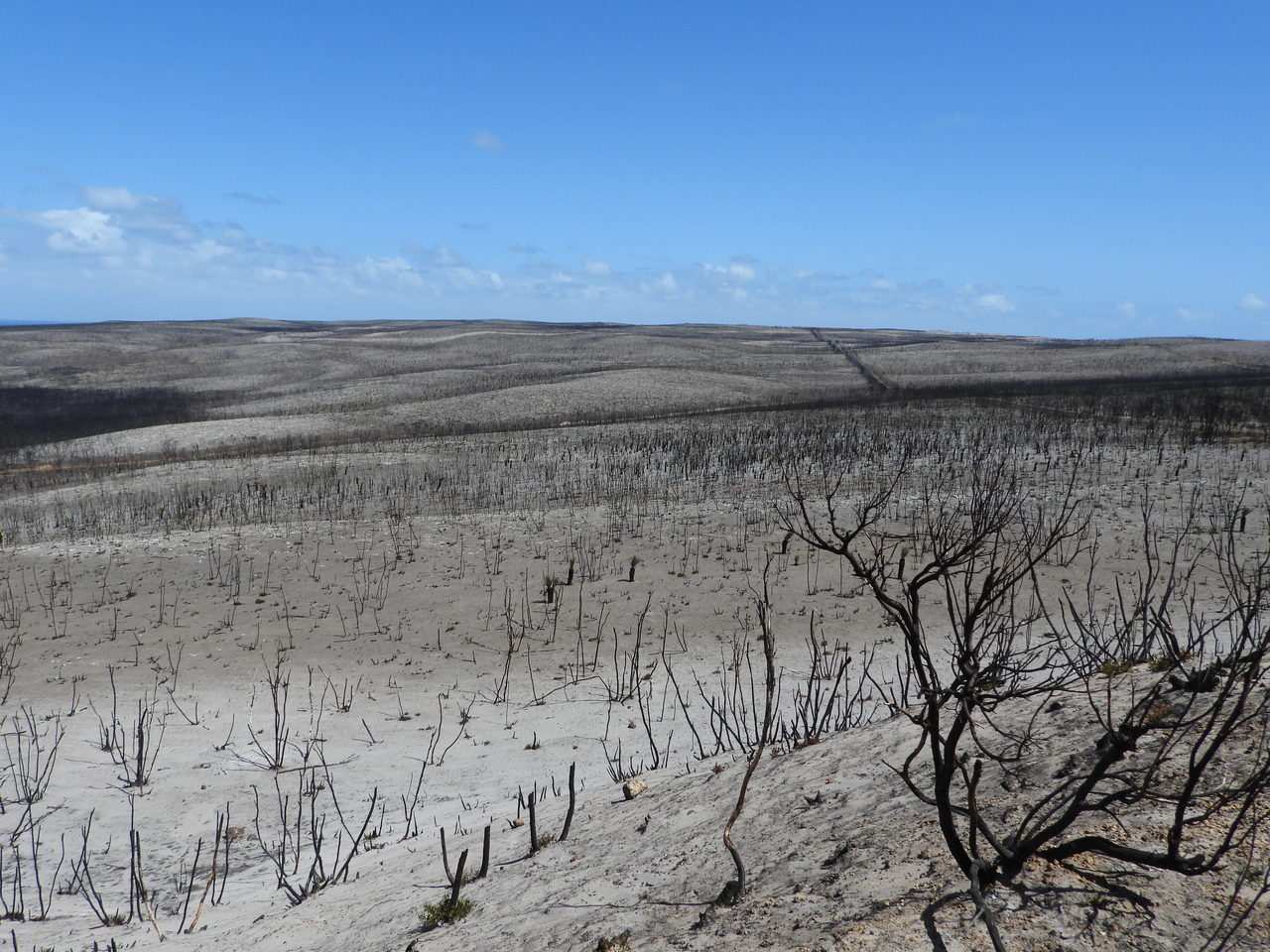 Fire has played an instrumental role in shaping ecosystems on land. Evidence for fire activity in Earth’s history can be tracked using the fossil record of charcoal.