Bryozoa (moss animals) is the most diverse lophophorate phylum in Earth history, yet we know very little about when and where they first evolved. Fossil evidence from Australia & China unveils the oldest bryozoans during the Cambrian explosion, extending their first occurrence by ~35 million years.

In shallow tropical waters off the western Coral Sea coast, a tiny (~ 15 mm diameter) saucer-shaped colony made up of thousands of individuals (zooids) is slowly, yet inconspicuously, ‘walking’ on the gravelly sea bottom, when suddenly and unexpectedly it is overturned by a water current. Modified elongate zooids with ciliated extensions immediately begin to quiver, sending signals saying “Watch out-Retract tentacles-Clean body-Pass message on”. As each zooid responds to these signals, the tiny disc is slowly able to right itself, clean off any surface debris and continue its journey across the seafloor. This is an example of how the division of labour by more than 1,000 tiny zooids (~ 300 µm in size) allows a colony to operate as a single entity.

The animal in question is the highly unusual bryozoan Selenaria maculata, a colonial organism that divides tasks across at least eight types of specialised zooids. The “divide and conquer” strategy enables each zooid to undertake functions typical of many solitary animals, including reproduction, feeding, larval brooding, sensory functions, defence and, most unusually for a bryozoan, locomotion. Resources are shared by the entire colony and nerve systems are connected amongst all zooids to ensure efficient behavioural coordination, resulting in increased colonial integration and efficiency. With the collective activity of thousands of individual zooids, Selenaria approaches the functional organisation of a mobile, solitary animal, distinct from its mostly immobile or encrusting fossil and extant relatives that have populated the oceans for hundreds of millions of years.

Given this remarkable specialization of zooid form and function (modularity) and asexual clonal growth of the colony, one cannot help wondering what the first bryozoans looked like and which evolutionary drivers initiated the development of colonial construction in Bryozoa. Until now, this has proven an elusive question to answer, especially since bryozoans dramatically burst into existence fully formed across 6 separate orders during the earliest part of the Ordovician (480 million years ago). Whilst these Ordovician forms were not capable of locomotion, as is the case for Selenaria, some specialization of zooid types and biomineralised colonial skeletons are already in place. It has long been thought that the early history of the Bryozoa probably extends back into the Cambrian, presumably first arising along with the majority of animal groups during the Cambrian evolutionary radiation. But the ‘missing’ record of Cambrian bryozoans ensured their evolutionary origins have continued to remain a conundrum.

A strange millimetric-sized colonial fossil called Protomelission gatehousei first discovered in the Ten Mile Creek section in the Flinders Ranges of South Australia and described by Brock and Cooper in 1993 was a key discovery. Originally left unassigned to a higher-order clade, Brock and Cooper (1993) did note that “the unique morphological features of Protomelission … [are] reminiscent of the skeletal framework of some colonial organisms (e.g., Bryozoa)”.

Our story then moves to another palaeo-continent in 2015, where Feiyang Chen and I, as PhD students from Northwest University, undertook fieldwork led by Prof. Zhifei Zhang at the Xiaoyangba section in Zhenba area, Hanzhong of South China. Large amounts of early Cambrian limestones were collected for later processing in acetic acid to retrieve small shelly fossils, material that I would then use as part of my PhD. In amongst the thousands of microscopic fossils, I discovered a single, wafer-thin, scale-like, skeleton that stood out as something very different from the other shelly material I was looking at.

Intrigued by what it was, I decided to bring this peculiar fossil as a tiny ‘talisman’ with me when I travelled to Uppsala University in Sweden working on a one-year cotutelle PhD program with Prof. Lars. E. Holmer in 2017. Discussing the fossil with Dr Christian Skovsted at the Swedish Historical Museum, we considered that this might actually be the elusive Cambrian bryozoan, but one specimen would not be enough to properly establish its true identity and there was no indication that more specimens could be found.

Then in 2018, I showed images of my peculiar fossil to Prof. Glenn A. Brock who was visiting China at the time and he immediately recognised my “talisman” as the aforementioned Protomelission which he had described 25 years ago. I had already been awarded a Macquarie University Research Fellowship in 2019 to work with Glenn, and it was now clear that establishing the origins of the Bryozoa would form a significant component of my research whilst in Australia. After two and half years of intensive research using state-of-the-art imaging techniques, we were able to determine that the Australian material was identical to my Chinese specimen and that, when combined together, the available specimens (4 new specimens collected subsequently) possessed all the necessary features to definitely establish Protomelission gatehousei as the first known Cambrian bryozoan.

In our new paper, we demonstrate that the millimetric honeycomb-like fossil of P. gatehousei is a stem-group bryozoan. The finely phosphatised colony tapers apically with an elliptical holdfast at the base, and lacks bifurcation, revealing an erect, self-supported colony anchored to the substrate. It is composed of two back-to-back layers of zooids arranged in a quincuncial pattern on the whole surface. Each modular zooid is monomorphic sub-hexagonal in shape and about 200 μm in size. There is a circular opening at the distal end of each zooid, that would have allowed passage of the tiny lophophore used for filter-feeding during life. Zooidal walls are complete and fully enclose the chamber of the zooid. The developmental sequence of zooidal budding consists of seven or five alternating, linear series resulting in a palmate colony.

Protomelission gatehousei thus represents the earliest known bryozoan, discovered on two Palaeo-continents (Australia and South China) around 520-million-year ago (Cambrian Age 3), pushing back the first occurrence of the phylum by approximately 35 million years. The erect bilaminate morphology of Protomelission provides the earliest example of a bryozoan colonial body-plan that has been repeatedly modified in subsequent younger bryozoan lineages.

Variations in the zooid number, shape and colonial morphology of P. gatehousei indicate that the raw material for potential phenotype plasticity was already present in the Bryozoa at this early evolutionary stage, providing the modularity that its very distant descendant, Selenaria, would need for full colonial integration. Possessing this modular construction, demonstrating two levels of plasticity and complexity (zooids and packaging of zooids), highlights the significance of modularity to evolutionary success in this exclusively colonial animal phylum. With Protomelission firmly planting the origins of bryozoans in the Cambrian, this now aligns the origins of the phylum Bryozoa with all the other modern animal phyla as part of the Cambrian evolutionary radiation of animal life. 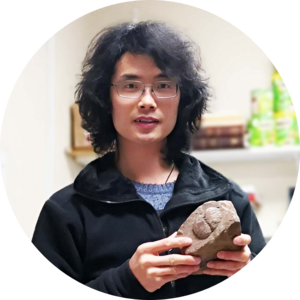 I am interested in evolutionary phenomena recorded by organic or mineralized fossils during the Cambrian evolutionary radiation and The Great Ordovician Bio-diversification, the most remarkable evolutionary events of animal diversification that have occurred on Earth over the last 540 million years. My current research is devoted to understanding the shape-size variation and bio-mineralization of early skeletal animals, and bringing this information into phylogenetics, trends and patterns of evolution.