A Farewell to Arms

A new fossil species of molgophid recumbirostran from the Carboniferous-aged Mazon Creek Lagerstätte, Illinois, reveals the antiquity of snake-like patterns of limb loss in amniotes.
Arjan Mann
Postdoctoral Fellow, Smithsonian National Museum of Natural History
Follow
Like Liked by Evelina Satkevic and 1 other
0

A new taxon of molgophid recumbirostran from the Carboniferous of Illinois, Nagini mazonense, suggests that the forelimb-first pattern of limb reduction that characterizes modern snakes also occurs early on in amniote evolution.

Living mammals and reptiles (including birds) belong to a group called the Amniota. Ancestrally, amniotes are fully terrestrial tetrapods which possess the key evolutionary innovation of the amniotic membrane during embryonic development eventually allowing them to become emancipated from the aquatic realm unlike their amphibian counterparts. This key innovation has allowed amniotes to become one of the largest and most diverse groups of vertebrates, achieving a wide range of body shapes and sizes, from tiny hummingbirds to massive blue whales and of course humans.

However, we know comparatively little about whether the earliest amniotes were capable of achieving the same range of diverse body plans and ecologies seen in modern amniotes. Historically early amniotes were thought to have all been roughly similar in body shape and ecology, with only some variation in feeding and display structures, with amniote morphological diversification really kicking into high gear by the late Permian with the diversification of therapsids and then of diapsid reptiles. One of the important ways in which amniotes can diversify is through modifications in limb morphology including the reduction or even complete loss of limbs. Limb reduction and extreme axial (body) elongation is the prominent mode in which living reptiles such as snakes, amphisbaenians (worm lizards), and other fossorial lizard groups have achieved diverse body plans. This type of serpentine body plan is thought to represent an adaptation to different locomotory environments and ecologies such as varying degrees of fossoriality, swimming, or even arboreal lifestyles.

Recently, a diverse group of early tetrapods known as the Recumbirostra, named after their shared adaptation of recumbent snouts (likely for headfirst burrowing), have risen to prominence in research on the origin of amniotes with several recent studies regarding the group as one of the earliest diversifications of reptiles. This group is highly unique in several aspects from their remarkable dental diversity to their unique robust skulls adapted for headfirst burrowing. But most importantly in this group of early fossil amniotes we see recorded some of the first examples of extreme body elongation paired with limb reduction and loss: this includes the complete forelimb loss seen in the newly described Nagini mazonense!

Our new study presents a description of a new fossil species of highly elongated, serpentine, recumbirostran known as Nagini mazonense from the world famous, Late Carboniferous-aged (309-307 Ma) Mazon Creek Lagerstätte of Illinois, U.S.A. Nagini belongs to a specific subgroup of highly elongated recumbirostrans known as molgophids–some of which possessed vertebral counts around 100 vertebrae! While previously known molgophid fossils already showed some form of limb reduction (foreshortening or missing distal elements), Nagini completely lacks the presence of a forelimb and pectoral girdle, however, fossils of Nagini reveal the animal curiously retained a well-developed hindlimb. How exactly limbs are lost in reptiles is complicated to say the least and is an active area of developmental research. However, from what we currently know the form of limb reduction exhibited in Nagini appears to follow the "forelimb-first" mode of limb loss found in snakes, whereby the gene expression (Tbx5) is altered and results in the complete failure to establish a forelimb field during development. The nail in the coffin here is really the lack of both a forelimb and more importantly the entire pectoral apparatus which are controlled in part by the same genes. Furthermore, this mode of limb loss present in Nagini may indicated it has 'deep-time' origins close to the base of amniotes. In general, the presence of diverse limb-reduced and axially-elongated forms, including forms like Nagini with complete forelimb loss, at or near the base of Amniota supports the idea that limb reduction and axial elongation is an adaptive mode ancestral to amniotes.

Nagini represents just one important data point in the story of understanding how limb reduction mechanisms evolved in early amniotes. Other closely related species also from the Mazon Creek Lagerstätte provide additional data and perspectives on this topic. These include the contemporary recumbirostran species: Diabloroter, Joermungandr and Infernovenator that show progressive limb shortening paired with loss of distal limb modules (e.g. digits). In the molgophid Infernovenator steenae there appears to only be a humerus retained in the forelimb. This hints that overall reduction of limb size and loss of distal limb modules may have preceded complete loss of the limb. While this is an exciting proposition for understanding limblessness in amniotes more data is needed to confirm if this scenario holds true across the tetrapod tree of life.

In many ways the range of adaptations we find in recumbirostran reptiles mirrors the diversity of these adaptations found in living squamates, however, appearing at an incredibly early stage of amniote evolution–likely very close to the origin of amniotes, sometime around the Mid-Carboniferous period (~323 Ma). Our new study on Nagini implies that many of our notions on what the early diversity of amniotes looked like, including the diversity in body forms, probably needs some work to say the least! Further studies on the Recumbirostra will undoubtedly unravel many more mysteries on the early evolution of amniotes.

I am a Vertebrate Paleontologist and currently a postdoctoral fellow at the Smithsonian, National Museum of Natural History in Washington D. C.

I use the fossil record to study the evolutionary origins of amniotes (animals with a cleidoic egg, including reptiles and mammals). My current research focuses on the locality of Mazon Creek, Illinois, and the early reptile fossils that are found there, however, I often wander all the directions of paleobiology, including the origins of the mammal lineage! 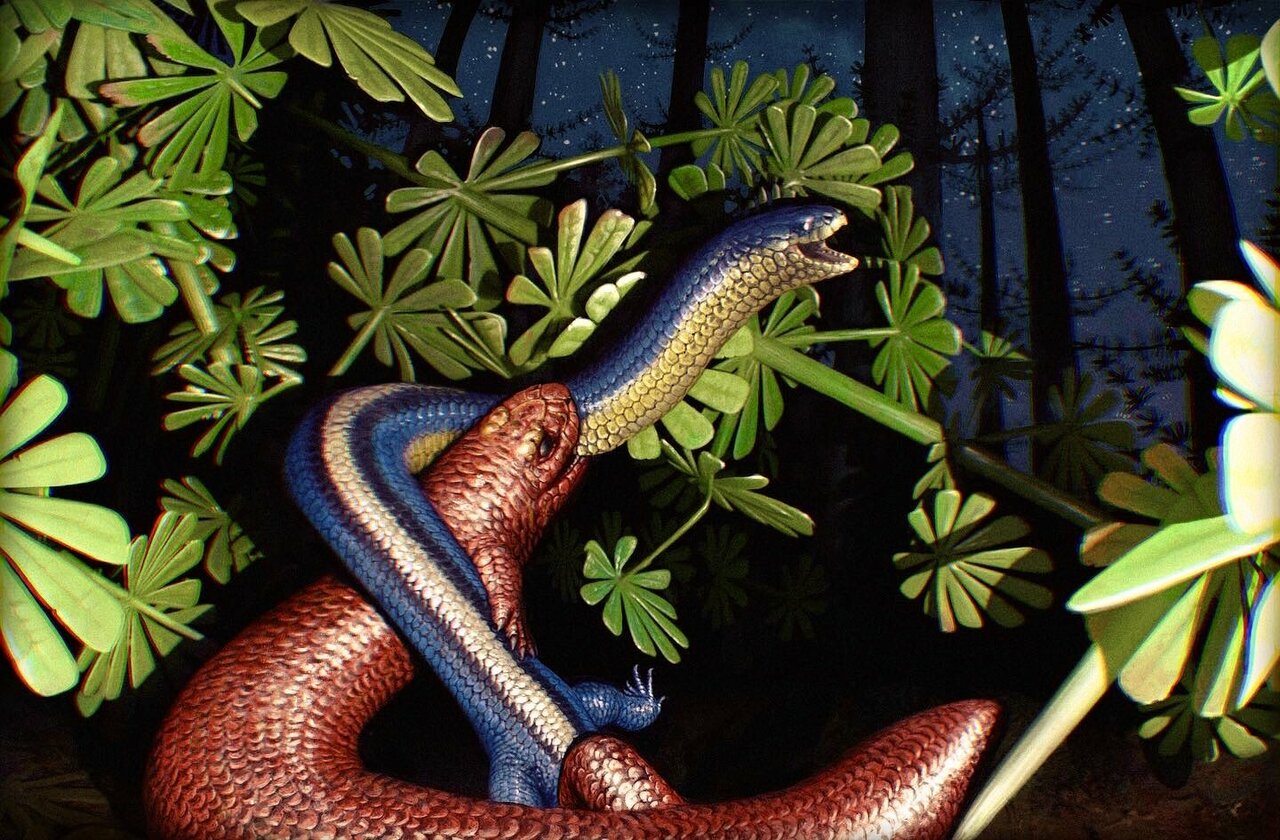 A Farewell to Arms

A new fossil species of molgophid recumbirostran from the Carboniferous-aged Mazon Creek Lagerstätte, Illinois, reveals the antiquity of snake-like patterns of limb loss in amniotes.