Does industrialized agriculture make use of nature-based solutions? This does not seem to be the case for arbuscular mycorrhizal fungi, important plant symbionts. Read more about how we came to this conclusion below.
Anna Edlinger
Postdoctoral researcher, Agroscope
Follow
Like Liked by Bernd Esche and 1 other
0

Combining field data and greenhouse experiments, the authors show how agricultural management practices like fungicide applications can affect the degree to which arbuscular mycorrhizal fungi in the soil provision phosphorus to plants.

Our new article1 suggests that the natural-fertilizer function provided by arbuscular mycorrhizal fungi (AMF), beneficial plant symbionts, is reduced in European cropland soils. It may not come as a surprise that fungicide use was identified as main cause of this impairment, yet this study is the first one showing this in soils stemming from real-life agricultural fields across a wide environmental gradient. Here we give some insights on how the study came about and share some thoughts on the results.

Soil microbes and their superpowers

Belowground life is highly diverse and provides multiple functions crucial for soil health and plant growth2. Arbuscular mycorrhizal fungi (AMF), the symbiotic partners of most land plants including many crops, are seen as key players in the belowground orchestra. AMF are of particular relevance for sustainable crop production as they provide plants with essential nutrients like phosphorus (P) through their hyphal network. Promoting the natural potential of AMF in agroecosystems could therefore circumvent the adverse environmental effects of high P fertilization, increase P availability in cropping systems with low fertilizer access, while contributing to other services provided by AMF such as soil aggregation or disease suppression. However, it remains unclear whether current cropping systems actually support AMF functioning. In fact, we know very little about what promotes or suppresses AMF communities in real-life agricultural contexts.

Prof. Marcel van der Heijden, my former PhD advisor at Agroscope & the University of Zürich Switzerland, has been fascinated by AMF and their functions ever since his PhD3. He is determined to figure out how to best use the natural superpowers of AMF with the big picture in mind to create productive agricultural ecosystems that work with, and not against nature. When he came up with the idea to study AMF functioning in agricultural soils across a European gradient I was instantly hooked. For me, collecting soils across Europe and bringing them to the greenhouse to see how AMF were doing sounded like an exciting adventure. All of this happened in the course of a Biodiversa funded project called “Digging deeper” with the goal to unravel the connection between belowground biodiversity and ecosystem functioning in agriculture4. In collaboration with international teams in Sweden, France, Germany, Spain, and Switzerland, led by Prof. Sara Hallin, Prof. Fernando Maestre, Prof. Laurent Phillipot, Prof. Matthias Rillig, and Prof. Marcel van der Heijden, we were eager to know: How capable are AMF to feed plants with essential nutrients in agricultural soils? How did previous management of the land affect their functioning? Little did I know at that time what I was getting myself into, but I was excited to make AMF and their functions visible and figure out more.

With the help of Dr. Jan Jansa, who is an expert in assessing the AMF’s ability to transfer P to plants, we designed an experiment using so-called compartment systems (Figure 1). A hyphal compartment, only accessible to the AMF’s hyphae but not to plant roots, would receive an injection of the radioisotope 33P after our model plant Plantago lanceolata had grown in the 210 different field soils for a couple of weeks (Figure 2). 33P, the radioactive equivalent to “common” P, would be taken up by the AMF and transferred to the plant roots. The signal produced during the decay of 33P would then allow us to draw conclusions about the amount of 33P transferred to and integrated into the plant biomass. High safety standards need to be met during this sort of experiment, and we were lucky to be welcomed by Prof. Emmanuel Frossard to his lab at ETH Zurich. He and his extremely well organized lab crew supported us through all ups and downs along the way. Handling so many pots and trying to standardize everything as best as possible was tedious work, but doable together with Dr. Gina Garland (my PhD co-advisor) and Elena Kost, a bachelor student at that time. Finally, after months of work and racing against time (33P decays quickly, so it will not be detectable after a certain time), all samples and data were stored in the right places. To my best knowledge, nobody had ever had the crazy idea to do an experiment like this with such a great number and diversity of soils, and I was anxious to see whether it worked out.

The hard work paid off

Once we conducted the first statistical analyses, it became clear that the method worked. We could confirm the hypothesis that AMF would be happier and more diligently transferring P to plants in soils that had not been cropped compared to soils originating from croplands. We ran a model-selection algorithm to get an overall picture of what drove AMF activity. We found the expected patterns in the non-cropped soils – the natural nutrient fertilizer function of AMF was reduced when soil available P was high and it was also hampered in soils with a low soil pH. None of this seemed to be very relevant in the cropland soils, which had all been tilled, fertilized and received various different pesticides previously. AMF activity was highly variable in these soils but did not follow any “natural” patterns. Fungicide use, however, became apparent as main suppressor of AMF activity. We knew these findings would be of interest for the scientific community, so we wrote up a manuscript and submitted it. The peer review process was very constructive and led to the inclusion of further data on the AMF community, which allowed us to see that the diversity of AMF was similarly affected by cropping practices and fungicide use as their activity.

What to take from this?

We were happy that our experiment had worked, yet the results were sobering. How can AMF be useful to plant production in an environment that is clearly inhospitable? Pesticides have been shown to have non-target effects on AMF before5, but this is never considered in ecotoxicological risk assessments. Anyhow, it is likely that fungicides are not the only culprits. For example, common crop cultivars may rely on AMF even less than our model plant Plantago lanceolata, which naturally associates with a range of AMF. Some modern crop cultivars benefit from AMF only under severe P limitation6. Therefore, the on-field reality might look even dimmer for a successful AMF-plant symbiosis. The discussions raised along the review process made me realize that assessing the AMF’s performance in industrialized agricultural contexts is a good start, but may actually not capture their true potential for crop production very well. I therefore hope that our article will not only inspire more research to understand the current drivers of AMF-plant symbiosis in agricultural systems, but also the development of new agroecosystems, redesigned to release the actual powers of beneficial organisms like AMF. 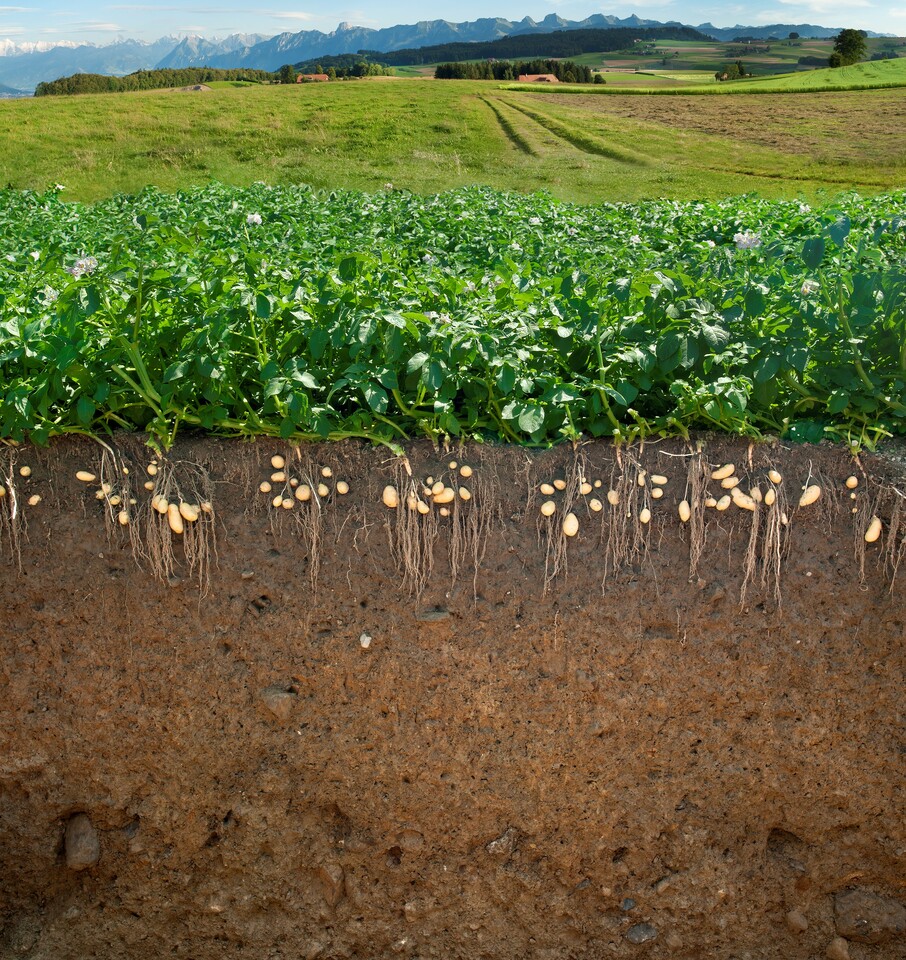 Does industrialized agriculture make use of nature-based solutions? This does not seem to be the case for arbuscular mycorrhizal fungi, important plant symbionts. Read more about how we came to this conclusion below.