How genetics, archaeology and history converged to lead us to conclude that we had likely identified two of the earliest Muslim burials in the Levant.
Megha Srigyan
PhD Student, UC Santa Cruz
Follow
Like Liked by Evelina Satkevic
0

When I started my master's degree, I could not have imagined working on ancient human DNA, let alone that my first ever publication would be based out of a prehistoric archaeological site in Syria. For someone who had previously worked on evolutionary questions in animal systems, ancient DNA initially seemed like an uncharacteristic choice. I was part of a master's programme (https://www.evobio.eu) that provides opportunities to freely explore one’s research interests, so the project had to be something that I had always been curious to try out, and an opportunity that would be hard to find afterwards. That I wanted to experience the Swedish summer was pretty much decided, but I was still looking for a project to finish my master’s studies with. While I wanted to learn bioinformatics and population genetics, co-incidentally at the time, I found myself intrigued by recent studies unravelling the genetic footprints of human expansion. In the few months leading up to my semester at Uppsala University, I discussed possible projects with Dr. Torsten Günther. The option of figuring out who were the individuals that were found buried at the Neolithic site of Tell Qarassa in Syria seemed like a chance to work on a region that has stood at the crossroads of cultural, religious and ethnic diversity for thousands of years. Thus began the behind-the-paper story of our study.

A quick summary of the main findings

To begin with, there weren’t always just two individuals found at the archaeological site, but fourteen instead. The larger Tell Qarassa expedition focused on the Neolithic time period, when the very first farmers in the world would have inhabited this area. When we received the sequence information, there was sufficient data for only two, a male and a female individual. Radiocarbon dating revealed both to be from the 7th-8th centuries while the rest were at least 8000 years old, with negligible DNA preservation. Hence, contrary to ‘ancient’ as originally aimed, we had DNA from a very historical time period and a team that had experience in working mostly with prehistoric material. However, as it turns out, we were in for more surprises.

The next twist came when we found out that despite being buried in Syria, the Tell Qarassa (TQ) individuals were most similar to modern populations not from the surrounding regions in the Levant as one would expect, but to groups known to originate from the Arabian Peninsula, such as Saudi and a subset of Bedouins from the Human Origins dataset1. In fact, it was difficult to tell which of the two shared most similarity with them. It is also likely that these two individuals were never exact matches to either and were their own ‘group’. Were there other patterns of similarity that the TQ individuals shared with their modern-day proxies, the Saudi and Bedouins? Both these modern groups are known to have relatively lower genetic diversity and prevalent endogamy2,3. The TQ individuals showed the lowest genetic diversity and high homozygosity values across all compared groups, indicating that they were likely members of a small group (even though they were not closely related). There was more: Bedouins are traditionally known to be camel herders and there is sufficient evidence of lactose tolerance alleles in the Arabian Peninsula from such groups4. Given their striking genetic similarity, we wondered whether the lactase persistence (LP) allele might have been present in the TQ individuals. One of the most exciting moments I remember was seeing evidence of the derived allele at one of the target SNPs that confer lactase persistence, for the female individual - indicating that she must have been lactose tolerant. To our surprise, we would discover later that our study marks the first observation of this particular LP variant in ancient human data! Later dietary isotope analyses again suggested similarity with Bedouins studied elsewhere in the Levant (e.g. high consumption of animal protein), giving us hints about the dietary habits of these individuals.

Putting it all together

These clues brought us closer to imagining how the two individuals buried at Tell Qarassa must have lived. However, by this time, I was also closer to the end of my stay in Uppsala. Shortly after, I returned to India and we began drafting our findings into a manuscript over the next year - while transitioning to lockdowns, an unforeseen screen-only world, and major life events. I am grateful that everyone on the team was prompt even as everything seemed unpredictable, as this phase proved to be instrumental for our study. We had different pieces of the puzzle through genetic analyses, but we needed clues from archaeology about the historical context in which these individuals had lived, i.e., 7th century Syria. Dr. Cristina Valdiosera, who conceived the study, set out to invite experts on this time period to join us, and we were delighted to have Dr. Andrew Petersen on board. He provided the crucial interpretation of the burial style (facing Mecca, orientation, signs of wrapping etc.), which indicated similarity to Muslim burial traditions. However, there are no known records of a Muslim cemetery in this area, suggesting that the individuals at Tell Qarassa could be some of the earliest Muslims known in this region. We could infer that they died young, but the cause of their death remains unknown, and experts on ancient pathogens at Stockholm University could not find convincing evidence of any. Their remains are now curated by the General Directorate of Antiquities and Museums in Syria, who provided us indispensable support throughout (see Supplementary Note for more details).

In September 2020, we shared the preprint on BioRxiv followed by another year of additional analyses, rewriting and editing after all the useful comments we got as reaction to the preprint and from reviewers. Three days after finishing the analyses in August 2021, I started my PhD in the Palaeogenomics Laboratory at UC Santa Cruz. From learning to use ancient DNA to throw light on past genetic variation of humans to now understanding the evolutionary past of extinct species for my PhD, it has been a valuable journey of reflection on various kinds of information that can be accessed only with past genetic data. Moreover, the most complete stories emerge when such data is complemented with multi-disciplinary evidence such as archaeology, stable isotopes and pathogen analyses, etc.

Muslim burials are not widely studied because religious rules do not permit excavations at known cemeteries. But what about a serendipitous discovery that sheds light on this historical period? There are at least three take-aways that I can think of : Firstly, these two individuals represent people who lived at a time and place that saw Christian, Byzantine and Aramaean legacies interacting with the emerging Islamic culture, indirectly capturing a fragment of this eventful period ~1300 years ago. Secondly, they were likely not from the nearby contemporary sedentarized Christian Arab society (see Supplementary Note), which meant that they could have been passing through Qarassa. In a way, this underscores the historical contributions made by travellers that end up in distant places, much like Bedouins themselves. Thirdly and perhaps most importantly, we could not match the Tell Qarassa individuals completely to any modern population in our dataset. This suggests that there is more genetic variation from this region to be represented and that despite strong similarities, Levantine groups have likely experienced distinct genetic histories. These are often shaped by contemporary social, religious and political regimes, about which there is so much more to be documented, and certainly many more stories to tell. 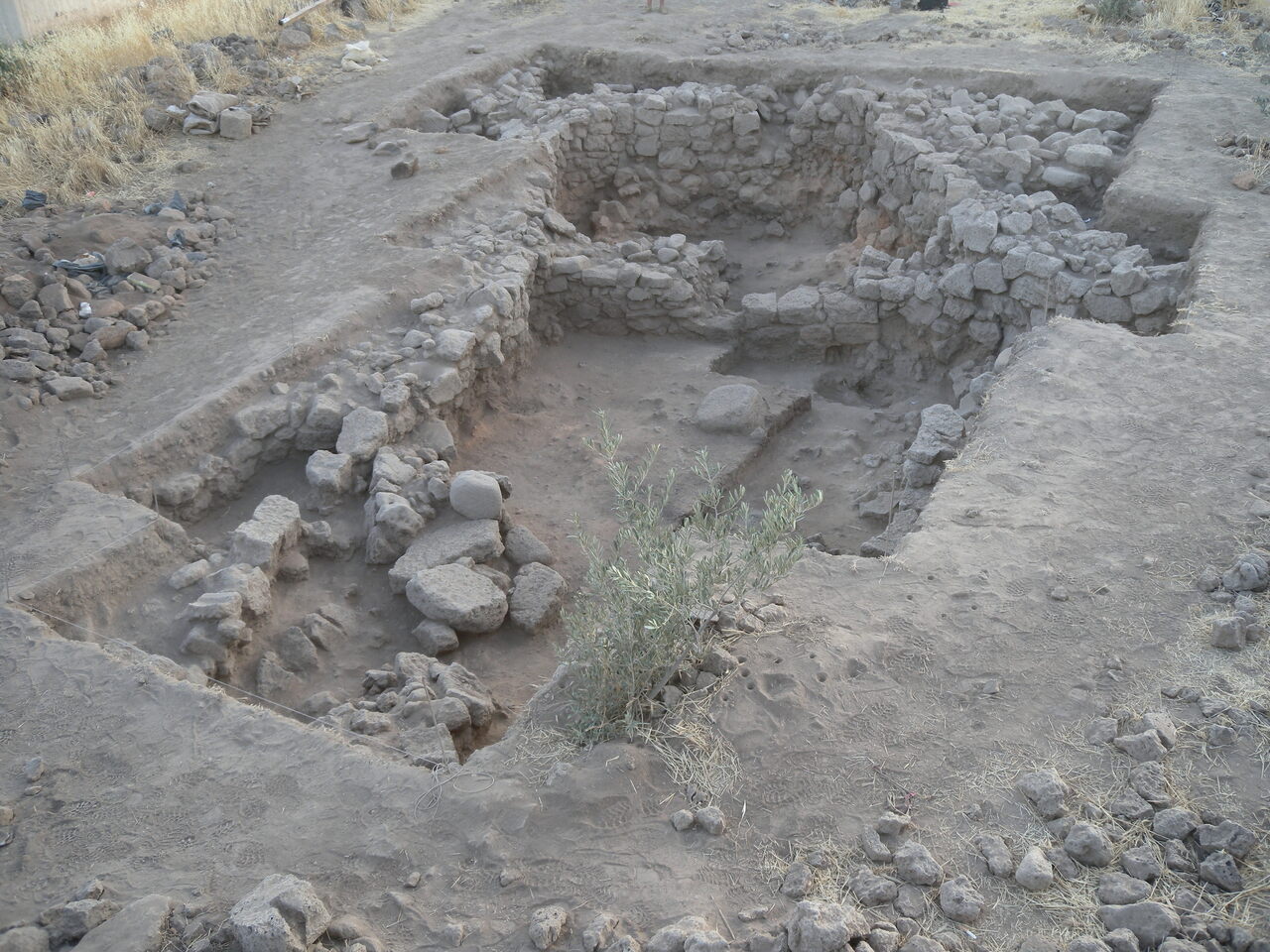 How genetics, archaeology and history converged to lead us to conclude that we had likely identified two of the earliest Muslim burials in the Levant.