Understanding how species may or may not respond to climate change is critical for their conservation. Focusing on two threatened freshwater fishes, we used genomic and environmental data to show how complex intraspecific patterns of genetic diversity might shape species responses.
Sean Buckley
Research Fellow, University of Western Australia
Follow
Like Liked by Jennifer Harman and 2 others
0

Background Understanding how species biology may facilitate resilience to climate change remains a critical factor in detecting and protecting species at risk of extinction. Many studies have focused on the role of particular ecological traits in driving species responses, but less so on demographic…

Many factors influence how a species responds to environmental (especially climatic) change – ecological traits such as thermal tolerance and migratory ability, demographic traits such as population size and genetic traits such as standing genetic variation may all play a role. Understanding how – and which of – these traits will allow species to respond to climate change is critically important for the conservation of threatened species [1]. However, more information is needed about the genetic components of adaptation and how these may interact with ecology to drive species responses to climate change, especially in terms of range shifts.

Our research focused on a pair of co-distributed freshwater fishes known as the southern (Nannoperca australis) and Yarra (Nannoperca obscura) pygmy perches. These two species are ecologically similar in many ways – both are small, poorly-dispersing habitat specialists which co-occur in creeks and floodplains across southeast Australia. Although the two species are regularly found together, southern pygmy perch have a wider range and are also found in drainages where Yarra pygmy perch does not occur. While overall genetic diversity is low for both species, Yarra pygmy perch populations have exceptionally low diversity (some of the lowest recorded for a freshwater fish [2]); this has not been linked to a recent or historical bottleneck event and is likely the result of a long-term lack of genetic diversity [3].

Extensive habitat modification and drought events have significantly impacted the conservation status of both species, with southern pygmy perch listed as threatened across its range while Yarra pygmy perch are endangered. In response, our group has been implementing a genetics-based captive breeding and reintroduction program over the last decade, which has resulted in the successful release and establishment of wild southern pygmy perch populations [4] but not for Yarra pygmy perch [5]. We sought to understand what role evolutionary history may have played in these disparate outcomes of similar conservation programs – were Yarra pygmy perch “destined” to respond poorly to reintroduction, or were other factors at play?

We obtained genomic data (ddRAD-seq) from wild populations of both species across their shared distribution to understand their evolutionary histories through phylogenetic, coalescent and demographic approaches. We also used environmental modelling to understand how their distributions had changed back in time. We predicted that their evolutionary histories and distribution changes would be similar if ecological factors played a relatively strong role in their responses to past climatic changes, with current differences owing to different species responses to recent environmental changes (or other unknown factors). Contrastingly, disparate histories would indicate that genetic diversity and demography played a relatively larger role and underpinned their contemporary differences in conservation status. The truth, unexpectedly, was a complex combination of both.

Several key differences across the species were immediately apparent. As expected, genetic diversity was much lower in Yarra than southern pygmy perch, likely influenced by lower historical connectivity between populations. Additionally, we found evidence for a large-scale expansion of distribution in southern pygmy perch during the last glacial maximum (~21 Kya), but not in Yarra pygmy perch (which appears to have been confined to its current distribution extent throughout history). The two species seemed to share this region of coastal southeast Australia as a climatic refugium throughout time. Together, these various components show very different evolutionary histories between the two species.

However, our demographic modelling suggested that pairs of populations across the two species which were found in the same rivers largely responded in the same way – with an expansion in size during the last glacial maximum, when cooler temperatures and glacial run-off facilitated larger populations. However, these similarities decreased closer to the edge of the shared refugium, where Yarra pygmy perch populations stopped showing these increases in population size. Connecting these pieces of the puzzle together suggested that a complex interaction of demographic history and genetic diversity within a species may be a key factor explaining differences in responses between species.

We suggested that the higher genetic variation in southern pygmy perch throughout history – boosted by higher interpopulation connectivity – provided the capacity for the species to capitalise on the more favourable conditions of glacial maxima. Yarra pygmy perch, however, seem to have always lacked this genetic diversity and thus could not expand in the same way. These findings highlight the complex role of intraspecific patterns in shaping interspecific variation in species responses, and suggests an important factor possibly underlying the lack of success in Yarra pygmy perch reintroductions. Reintroductions (or introductions into novel habitat) mimic many of the selective processes under which range expansions occur, with small populations struggling to adapt and maintain stability in a challenging environment. Our historical perspectives suggest that the lack of genetic diversity in Yarra pygmy perch is a significant barrier for them – our captive management program has now evolved into genetic rescue by mixing divergent populations to try and address this issue. Without these efforts to bolster genetic diversity, threatened species may not be adequately equipped to handle the trials of reintroduction and the challenges of a changing world.

I am a conservation geneticist with a keen interest in the application of evolutionary and ecological genetics to address key conservation issues. Although my initial postgraduate research focused on the role of historical environmental changes in shaping the evolution and conservation status of freshwater fishes, I love working with all kinds of taxonomic groups. My current research focuses on applying a combination of genetic, morphological and demographic information to inform conservation management actions, particularly in regards to genetic rescue and population mixing. 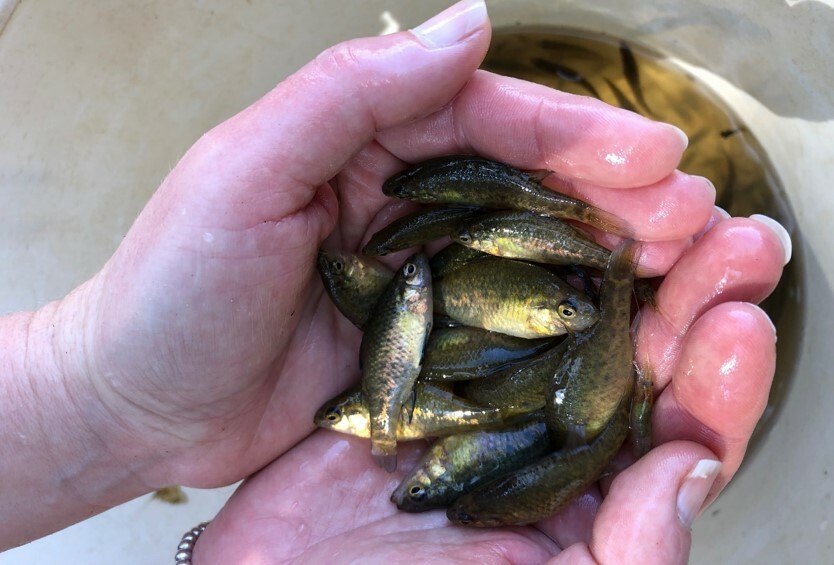 Understanding how species may or may not respond to climate change is critical for their conservation. Focusing on two threatened freshwater fishes, we used genomic and environmental data to show how complex intraspecific patterns of genetic diversity might shape species responses.