A timeframe for human evolution

A precise timeframe for human evolution is fundamental to contextualise key events that occurred during the evolution of our lineage. Our new phylogenetic study dates specific speciation events and provides important insights into body mass and encephalization trends in human evolution.

+1
Hans P. Püschel and 1 other View all
PhD student , University of Edinburgh
Follow 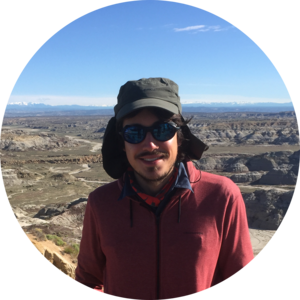 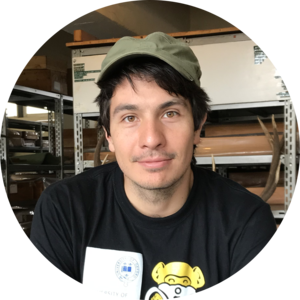 The are several ever-present questions that have captured the attention of both scientists and the general public. When exactly did humans originate, and when did the last common ancestor of humans and chimpanzees live? When did the relative size of the brain start to increase? And is there a link between brain and body size evolution? In spite of many important fossil findings, questions such as these are still divisive in part due to the absence of a common evolutionary timescale for human evolution. An accurate timescale does not only provide a common temporal framework for the evolutionary history of our own lineage, but it can also allow us to assess possible associations between key evolutionary changes and different possible causal factors such as environmental influences or changes in climatic conditions.

For a long time, my brother Thomas and I have discussed this sort of questions in informal settings (e.g., family reunions or beer in hand at a pub), but never thought about seriously addressing this issue together, which should have been obvious since he is palaeoanthropologist whereas I am myself a mammalian palaeontologist (Figure 1). It was only in 2019 when we decided to seriously tackle some of these questions and started running some preliminary tests. We realised that the best way forward was to form a team with the appropriate skillset to support us. Therefore, later that year we decided to invite some colleagues (Ornella Bertrand, Joe O’Reilly and René Bobe) to collaborate with us so that they could enrich the work with their expertise (i.e., brain evolution, phylogenetics, and the hominin fossil record, respectively) and further improved our preliminary work. However, it was difficult for me to find the time to properly work on this project due to the different duties associated with my PhD. Who would have thought that the series of lockdowns due to the COVID-19 pandemic would give us the time to work more intensively on this? I was in Argentina collecting data from different museum collections, whilst my brother was preparing for a series of fieldtrips to Mozambique and Kenya when the pandemic brought everything to a standstill. This led us to rethink all our plans for the year, which in its turn resulted in way more regular videocalls than before, and entire days of running analyses. Eventually we were able to put together the first draft of our work which was then shared with the rest of the team whose comments improved the original text, thus resulting in the first version of our manuscript. 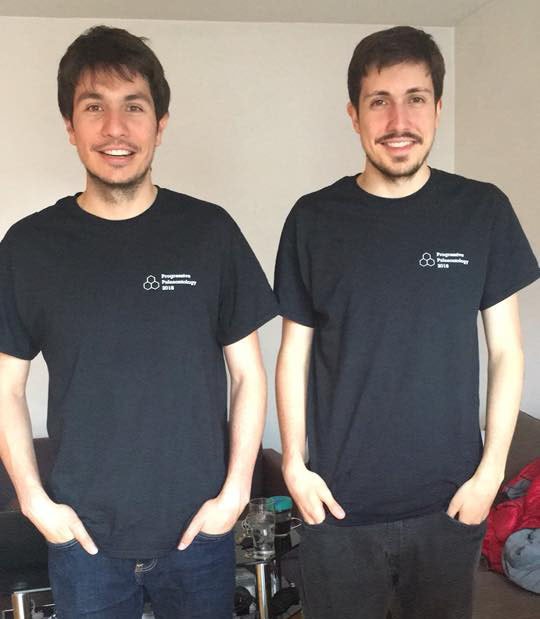 Figure 1. The two corresponding authors talking about the idea behind this paper before the pandemic. The identical Progressive Palaeontology (ProgPal) T-shirts are a mere coincidence.

In our work we focused on the temporal framework in which human evolution occurred. Traditionally, paleoanthropologists have estimated the human evolutionary timescale by looking at stratigraphic ranges, (i.e., the ages of different species in the fossil record; Figure 2) and then registering when a certain species first appears in the fossil record, as well as the last time that species is observed. Although undoubtedly valuable, this approach has limitations as it only estimates the local first and last appearance of a particular species in the fossil record, which do not correspond to the actual origination and extinction dates of the species of interest (i.e., these dates do not correspond to the actual speciation events). Evolutionary biologists on the other hand, have usually calculated these dates by looking at dated evolutionary trees (i.e., phylogenies) which are generated from the genetic information available for both living species (e.g., humans, chimpanzees, gorillas) as well as some extinct ones, such as Neanderthals or Denisovans. However, this approach only considers molecular and some of the stratigraphic information available for these species, disregarding the anatomical information that these fossils can provide. Even more problematic is the omission of most of the hominins in the fossil record for which molecular information is not available. In other words, the problem with these two commonly applied approaches is that they exclusively focus on a subset of the available data, without making the most of all the available information that we currently have. 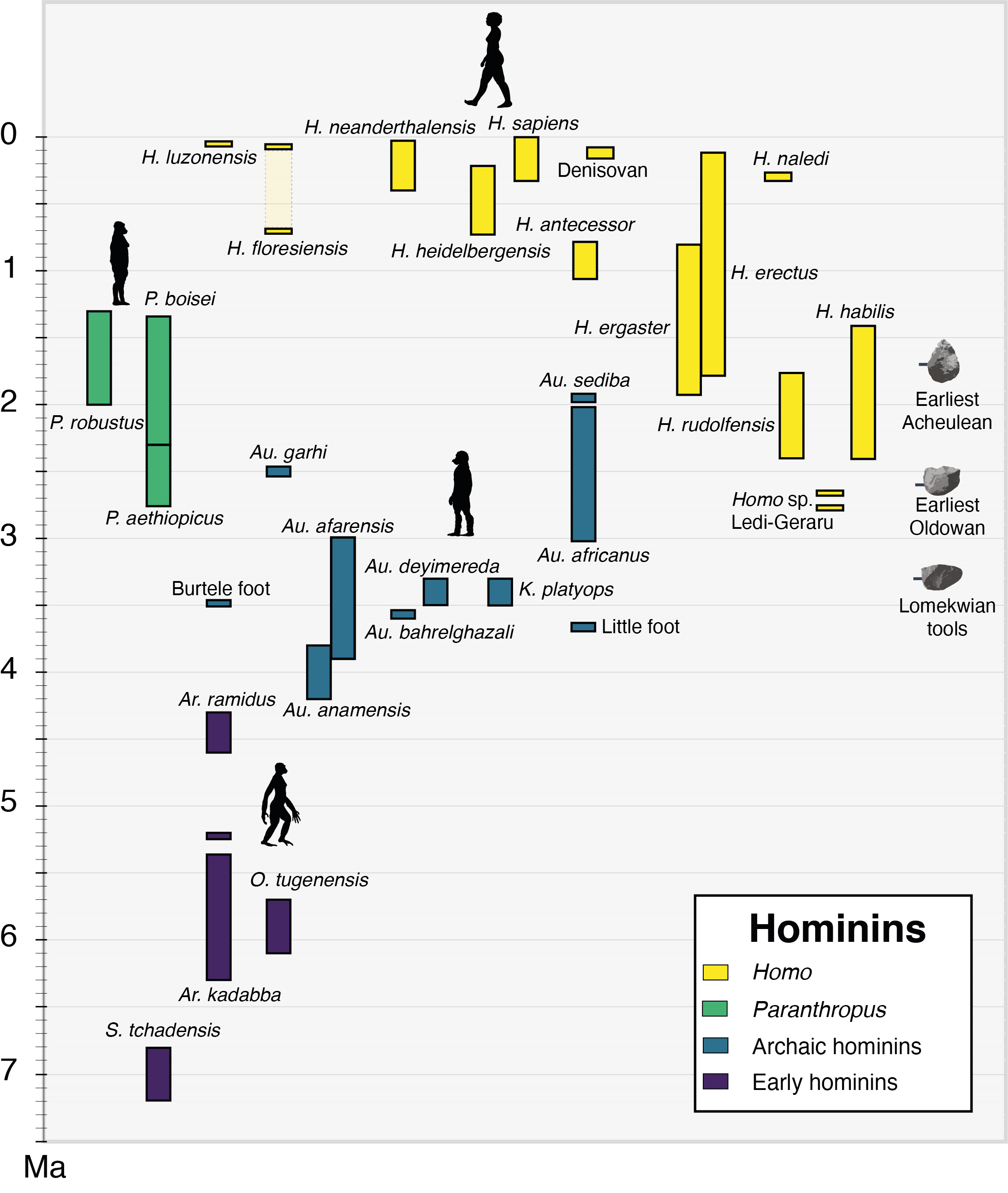 Figure 2. Time of chart of hominin species. The coloured rectangles represent their stratigraphic ranges. The hominin silhouettes were downloaded from http://phylopic.org/.

For these reasons, in our study we decided to apply an approach known as Total-Evidence Dating (TED) that would allow us to not only incorporate the existing genetic information for some hominin and ape species, but also integrate the anatomical data available for most hominin species, as well as radiometric ages (i.e., data about the geological age of the fossils), incorporating all this information directly in the tips of the tree. In addition to estimating an evolutionary timescale for the hominin clade, we also used the dated evolutionary trees to carry out ancestral state reconstruction (ACSR) (i.e., a method that models the evolution of a particular trait back in time) of two evolutionary important features: body mass and phylogenetic encephalization quotient (PEQ) (i.e., a measurement of how brain size scales with respect to body size that takes into account phylogenetic non-independence). In doing so, we were able to better understand how these two key traits evolved in the hominin clade.

Overall, our results show that our human evolution timescale is consistent with previous studies that analysed living species, but we also provide robust divergence estimates for all the rest of the fossils hominins for which there is no genetic data available. Furthermore, we show that the last common ancestor of our own genus Homo is likely to have appeared around 3.3 Ma (between 4.30 and 2.56 Ma). In addition, our results indicate that hominin body mass decreased before the emergence of our own genus, but that it exhibited a general increasing trend afterwards. We also show that hominins displayed a general trend of gradual, but accelerating, encephalization through time. Finally, our results indicate that H. sapiens is the most encephalized hominin species possessing the greatest encephalization positive rate across the hominin evolutionary history, whereas H. floresiensis and H. naledi did not follow these encephalization and body mass general trends.

You can read our paper here.