A new fossil from Charnwood forest is resolved as a crown-group cnidarian and reveals the Precambrian ancestry of cnidarian bodyplans.
Frankie Dunn
Research Fellow, University of Oxford
Follow
Like Liked by Evelina Satkevic and 3 others
0

A crown-group cnidarian from the Ediacaran of Charnwood Forest, UK - Nature Ecology & Evolution

The origin and early radiation of animals is one of the most profound events in Earth History. Early animals transformed the world around them, altering geochemical cycles, building complex ecosystems and diversifying into myriad forms. However, the rise of animals is also one of the most controversial episodes in Earth History, with different research teams providing different hypotheses to explain the timescale over which this event unfolded. Animals are separated into about 34 groups called Phyla, each characterised by a particular bodyplan (e.g. that of an annelid worm or an arthropod). Almost all of these Phyla appear abruptly in the fossil record at the base of the Cambrian Period during an event known as the Cambrian Explosion. But, how far the Pre-Cambrian fuse to the Cambrian Explosion extends and the nature of these most ancient animal communities are matters of sustained debate.

The Ediacaran Period – which immediately precedes the Cambrian Period - is host to the oldest macro-scale, complex organisms preserved in large communities. These organisms, often called the ‘Ediacaran biota’ are alien and display bodyplans that have never been repeated, for example the iconic ‘fractal fronds’, or rangeomorphs (Fig. 1). Increasingly, researchers have leveraged data which supports the interpretation of these forms as ancient animals, forming communities with significant differences to those in the Phanerozoic (e.g. the dominance of neutral over niche processes in community structure [Mitchell et al. 2019]). Some Ediacaran-age fossils have been ascribed to specific animal phyla (e.g. Kimberella [Cunningham et al. 2017]), but falling outside the living diversity of that group and lacking direct, living descendants. Our new fossil – Auroralumina attenboroughii – from the Ediacaran of Charnwood Forest, UK, is unique as it is the oldest described fossil which can be firmly placed in a group that is still around today. Our new discovery demonstrates that the characteristic bodyplan of that phylum was fixed by at least ~560 million years ago, and before the Cambrian Explosion of animal life.

The Ediacaran fossils of Charnwood Forest have a rich heritage. Charnia – a frond-like organism named after Charnwood – was the first described fossil from demonstrably Precambrian rocks, confirming that life had a more ancient heritage than the base of the Cambrian Period and stretched back into what was then called the ‘Azoic’, or without life. Its discovery was a paradigm shifting moment, confirming Darwin’s theory of a protracted Precambrian history for life and setting the stage for the recognition of a global Ediacaran biota. We have named our new fossil species after Sir David Attenborough for his continued work in publicising the fossils of Charnwood Forest and, more generally, publicising Ediacaran fossils globally, bringing these important fossils into the public domain.

We describe A. attenboroughii as a fossil cnidarian (Fig. 2) – the phylum which today includes sea anemones, corals and jellyfish – and specifically as belonging to the sub-group Medusozoa, which includes all cnidarians which go through a jellyfish (or medusa) stage. Today, cnidarians are an important animal group, forming the building blocks of coral reefs, crucial for the maintenance of marine diversity today and we can trace this significant ecological function back in deep time over hundreds of millions of years. Often these long extinct cnidarian groups can show suites of anatomical characters which are not found in living groups, like a polyhedral exoskeleton, a character we find in Auroralumina. Auroralumina and other fossil medusozoans show longitudinal corner invaginations in the exoskeleton called sulci (absent in living medusozoans), which set medusozoan skeletons apart from other skeletonising groups. Auroralumina, which is latin for dawn lantern (after the shape of the periderm) is bifurcating, with two polyps being present in the holotype specimen indicating that it was colonial in life, like many cnidarians today.

A. attenboroughii, as with many fossils of this age, is preserved as an impression – like a footprint in the sand – and so we are not able to access information about the internal anatomy of the organism, but we do see the outline of a dense crown of tentacles emerging from the top of the goblets. This crown does not align perfectly with the margins of the goblet, indicating that the tentacles were emerging from inside the periderm, rather than being a direct continuation of that structure. In fact, the preservational style of the periderm and tentacles is markedly different. The periderm shows the greatest relief of any specimen on the fossil surface, suggesting it was rigid & less pliable than other tissues, while the tentacles show much lower relief, indicative of a softer tissue.

We document only one specimen of A. attenboroughii, and nothing else with a similar anatomy is present for another ~20 million years, despite many global fossil sites in the interim which we might expect to include them. This may indicate that we are simply not recording the palaeoenvironments that A. attenboroughii and its near kin typically lived in, or they may have been rare components of Ediacaran ecosystems. On current evidence, it is impossible to say, but we are hopeful that future discoveries will help to address these and other outstanding questions. 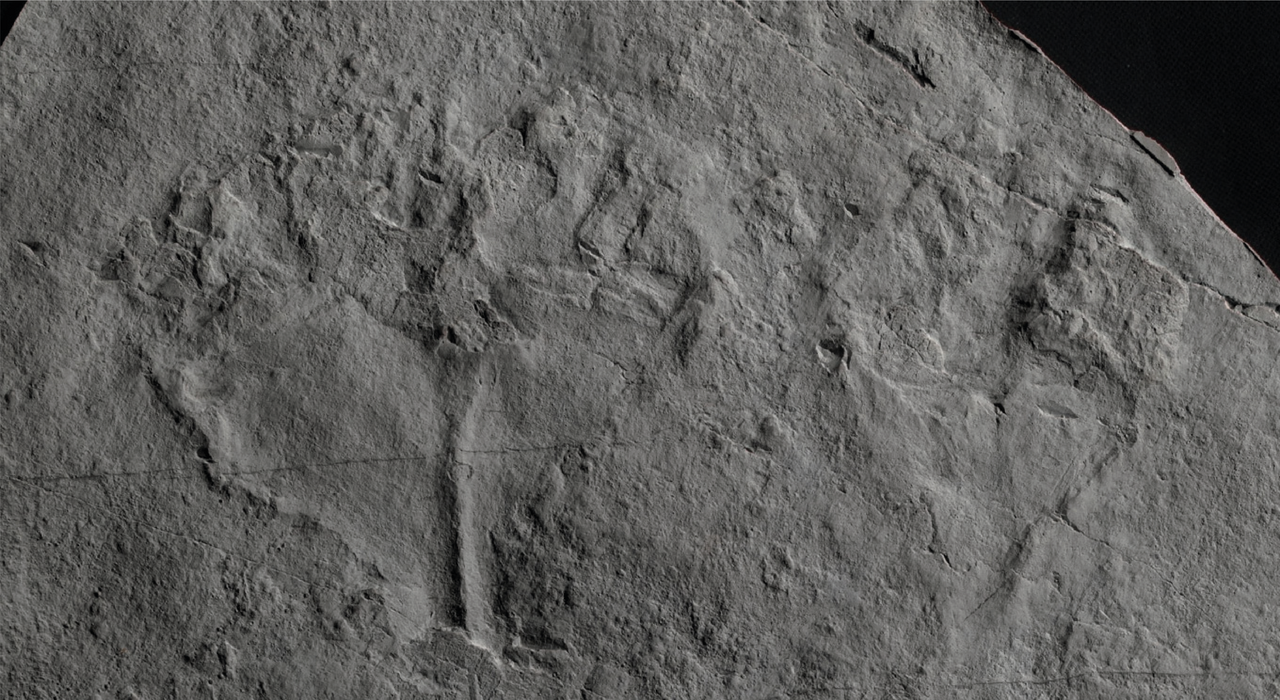 A new fossil from Charnwood forest is resolved as a crown-group cnidarian and reveals the Precambrian ancestry of cnidarian bodyplans.