Cell wall composition and architecture were critically important features when dry land was conquered by the first terrestrial plants. How far back in evolution can advanced land plant cell wall features be traced?
Peter Ulvskov, Maria Dalgaard Mikkelsen, Jesper Harholt & William Willats
4 contributors
Like Be the first to like this
0

Mikkelsen et al. demonstrate molecular and cellular evidence of the evolution of xyloglucan (XyG), a structural component of the cell walls of most land plants, in charophyte algae. This study describes the structure of XyG in charophyte algae, including identification of fucosylated XyG, and furthe…

Rewind evolution more than half a billion years to before colonization of dry land and it is not at all certain that evolution would retrace its steps forward in time. Other lineages of photosynthetic organisms might prevail and nudge evolution in a different direction resulting in a land flora potentially very different from the present one. The interest in this pivotal moment in Earth’s history has led to studies of traits in certain freshwater green algae that could have made their ancestors particularly suited to win the race to colonize dry land. The algae in question are classified to Charophyta. So many “terrestrial” traits have been found among the charophyte algae (CGA) that exaptation in water seems a less plausible explanation than adaptation of algae already on land with many of the extant freshwater algae then being secondarily aquatic1. The polysaccharide-based cell wall of these algae is of particular interest. It is in many regards similar to that of vascular plants, which rely on their cell walls for structural support, water transport and for protection against desiccation.

In particular, xyloglucan (XyG) is a cell wall polysaccharide that has been considered a hallmark of vascular plant evolution. XyG has quite an ordered structure with a β-glucan backbone decorated with a variety of short side-chains interspersed with unsubstituted glucose units at regular intervals. XyG is considered of particular importance to walls at the stage where they expand during cell growth. Preliminary investigations suggested that XyG emerged before vascular plants and we have established conclusively that XyG is present in Klebsormidium, an early divergent Charophyte (figure 1). It might be reasonable to expect that primordial XyGs would be less complex than say in flowering plants but we find a greater diversity of side-chain structures in Charophytes compared with that in flowering plants. Adaptation through evolution is often thought of in terms of refinement through increase in complexity but here we observe a reduction in the repertoire of side-chains suggesting a fine tuning through simplification during evolution.

Side-chains carrying fucose are of particular functional significance in flowering plants where fucosylated XyG appears to be important to vascular development and pollen tube function. Fucosylated XyG cannot be traced back to Klebsormidium but we demonstrate it to be present in the later divergent Charophyte order Zygnematophyceae. Proving the existence of fucosylated XyG relies on a range of analytical methods: recognition by monoclonal antibody specific to fucosylated XyG, release of XyG oligosaccharides by a hydrolase specific to the regularly spaced unsubstituted glucose units followed by both thin layer chromatography and mass spectrometry (MS and MS2) analysis with and without pretreatment with a fucosidase.

One of the XyG specific monoclonal antibodies was also used as a probe for labeling in confocal microscopy. The patterns of labeling that we observe are interesting in two regards. Firstly, the very restricted labeling offers an explanation for why XyG has evaded rigorous proof of existence in Charophytes for so long, and secondly XyG’s predominance in domains of the cell wall that are expanding points to a functional significance to wall expansion in growing cells well aligned with the how cell expansion in flowering plants has been thought about. A theory of cell expansion has been proposed in which insertion of newly synthesized polysaccharides directly cause stress relaxation in the wall and hence expansion2.

The process of cell wall synthesis and cell expansion has since been demonstrated to not be directly coupled processes in flowering plants. However, the patterns of XyG labeling in the Charophyte species shown in figure 2 suggest that the primordial mode of expanding a polysaccharide cell wall could be directly coupled to biosynthesis and insertion of polysaccharides in the wall. Mechanistic proof for this is a considerable challenge, but a worthwhile one because such insight would enable us to understand not just the evolution of XyG structures but also its functionality.
This post was co-written with Maria Dalgaard Mikkelsen, Jesper Harholt and William Willats.
Cited literature
+3
Multiple Contributors
Peter Ulvskov, Maria Dalgaard Mikkelsen, Jesper Harholt & William Willats
View all 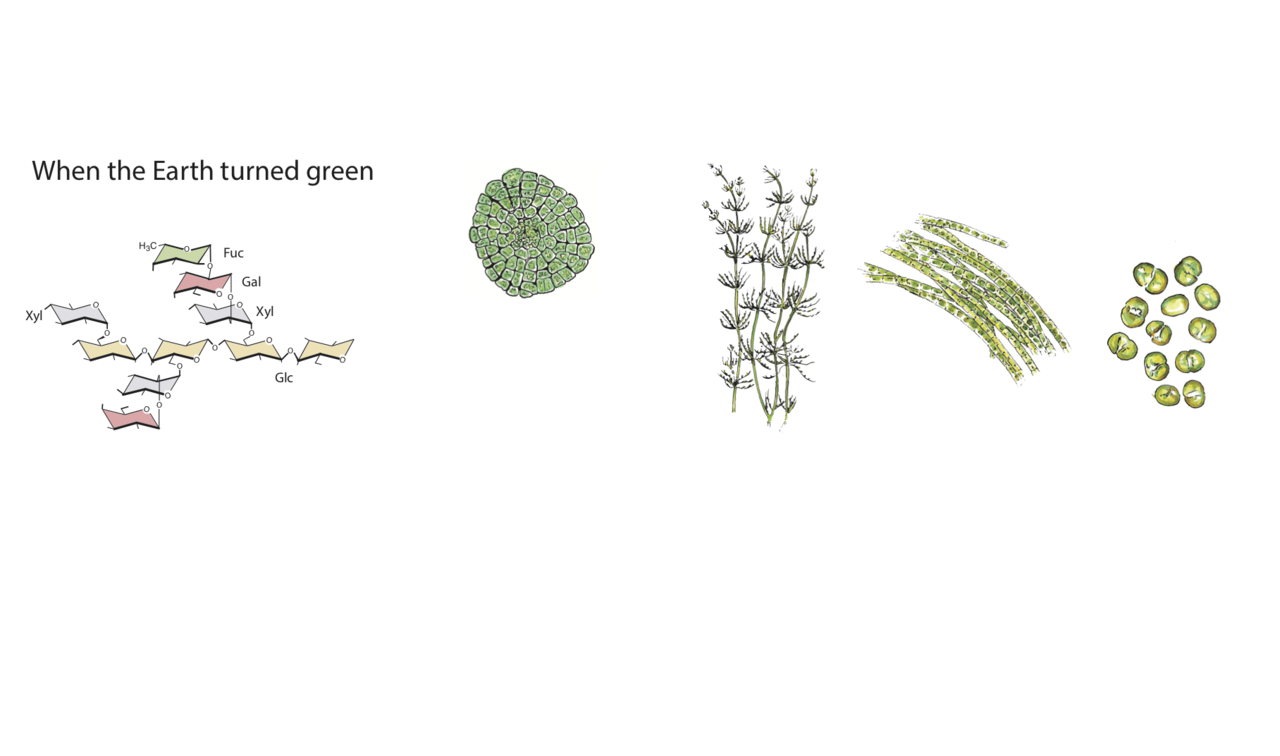 Cell wall composition and architecture were critically important features when dry land was conquered by the first terrestrial plants. How far back in evolution can advanced land plant cell wall features be traced?