This is the story of an old grain transported by a river that is not there anymore.
Cecile Blanchet
Researcher, GFZ Potsdam
Follow
Liked by SteterTropfen 💧 and 1 other

The presence of large rivers in North Africa critical for Quaternary human migrations were controlled by a combination of orbital forcing and Mediterranean storminess, according to terrestrial proxy records from a marine core off Libya integrated with paleoclimate modelling.

Once I stumbled upon a picture taken in Niger by photographer Mike Hettwer in 2006. It’s a stunning image. It shows two Tuareg men seated on a rock, next to a magnificent engraving of two giraffes. A big and a small giraffe. They measure over 5 m and have been made on top of an outcrop, overseeing the landscape. It’s a legacy from a long time ago, before any stories have been written. Such rock engravings and painting can be found throughout the Sahara, and most of them were made during the early to mid-Holocene (9,000 to 5,000 years ago).

By studying sediments, landscape forms and fossils, we know that the Sahara was a welcoming place when this rock art was made. There were crocodiles, elephants, hippopotamuses, fishes living in a grassy savannah. Actually, it rained enough to fill some very big lakes in the middle of the desert and there were also rivers running through it. Many. But I am interested in two of them, which ran in North Africa and were connecting high plateaus in the central Sahara to the coast of Libya, opening a waterway for prehistoric people. From what we know, these extinct rivers flew into the Gulf of Sirte (Libya), and so we should find remnants of the sediments they transported on the seafloor. By looking through the layers of sediments deposited over time like into a layered cake, we can reconstruct the timeline of river activation, changes in the climate and the landscape.

End of 2011. I get an excited phone call from my colleague Warner Brückmann telling me that “we can go coring in the Gulf of Sirte!”. In plain language, it means that we will go with a research ship to go poking through the soft sediments with a sort of giant syringe called “corer” to retrieve a 10 m-long pipes of mud. I was pregnant with my second child at the time so could not join my colleague Anne Osborne onboard the Dutch research ship Pelagia. Anne and the crew followed our sketchy coring plan and took 10 cores, four of which are just fantastic.

Their uniqueness was revealed when we split them open in two: the colors! Generally, marine sediments have rather homogenous tones (brown-greenish), but these cores were astonishing: pitch black, bright orange, olive green, bluish grey. We proceeded with chemical analyses and started to put together the story told by these very old grains, slowly deposited in the gulf of Sirte. Using specific chemical and mineralogical fingerprints, we could identify the layers of fluvial sediments and date them. Step by step, we reconstructed the history of these rivers for the past 160,000 years. This record was then compared with estimation of past rainfall over North Africa from a complex Earth system model, called LOVECLIM. Models are a fantastic tool to understand what modulates the rainfall over long periods of time and also permit to map where the precipitation occurs. This was a great way to link the rainfall to river flow and identify the main controlling factors. What we saw where very large shifts in landscape and climate that seem to occur quite fast (aka. within a few hundred years) and imply complete reorganizations of the roaming space and resources for prehistoric populations. There were recurrent periods of warm and green conditions that lasted for several thousand years with rainfall all over North Africa and a coastal area remaining rather wet even during drier periods. We now hope that this data-model reconstruction will be useful for paleontologists working in the region and we are already working on extending the record to 400,000 yrs, in order to cover the time since the up-to-now oldest Homo sapiens lived in Morocco. 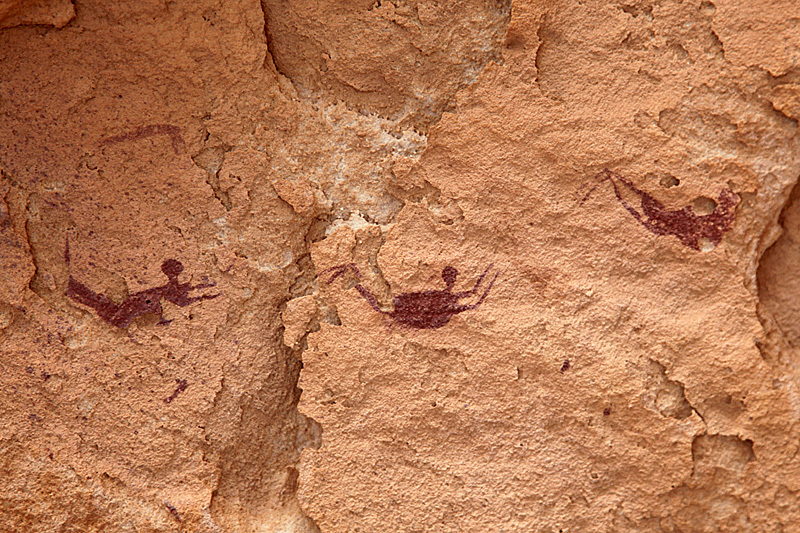 This is the story of an old grain transported by a river that is not there anymore.