Biodiversity and Nature Contributions to people are not equally distributed globally; there have been long recognized centres of endemism or other areas of unique value for biodiversity and its values to people. Determining which areas can potentially provide the highest value of any single or multiple of these assets is of particular importance to determine where conservation attention and funds should be directed. In the first half of 2022 policy makers and global leaders will gather in Kunming, China to agree on a new global biodiversity framework and accompanying conservation targets. Ideally natural climate solutions and nature's contributions to people are a part of this discussion and fully integrated in the targets to maximize synergies.

In 2019 I arrived as a freshly baked postdoc at the International Institute for Applied Systems Analysis (IIASA) in Austria. Excited about being given the opportunity to work on nexus topics that go beyond single disciplines, perspectives and values. The project I was working on (called NatureMap) involved a wide range of leading researchers from various backgrounds and I remember with joy the stimulating discussions, in meetings and pubs alike, that we had at our first consortium meeting in Cambridge, UK. The main aim of NatureMap project was furthermore at the heart of one of my academic passions, that is to create new useful spatial data for the conservation community.

But how can multiple maps of various different things, such as biodiversity, land use or soil carbon, integrated in a single global assessment for supporting conservation policy? We asked a simple question: Where would conservation bring the greatest benefit in reducing number of threatened species, while also conserving existing carbon stocks and clean water quality regulation?

We find that areas of conservation importance for biodiversity, carbon and water are distributed across all terrestrial biomes (except Antarctica which we did not include in the analyses), although the areas with the greatest conservation importance tend to be located in tropical regions, mountain ranges and islands all around the world.

It should be stressed that this is a conservation biogeography analysis, it is not intended to prescribe what needs to be done and where, but rather identify the broad regions that should be in the radar of international agencies, initiatives and financial donors interested in climate, biodiversity and clean water provision. Our analysis therefore deliberately does not consider specific actions to be implemented in these areas, nor is intended to inform local-scale decision making or prioritization.

In my opinion one of the key limitations of previous work is the construction of independent spatial analyses for multiple assets which are then overlaid or scored, and the sum of the overlay assumed to represent a combined optimal outcome. We improve on this by explicitly jointly optimising multiple desirable outcomes, thus providing a genuine integrated perspective and the possibility to evaluate performance and synergies of different conservation preferences and combinations of maps. Through this approach we were also able to determine that commonly made proposals to step up "protection" measures by conserving 10% or 30% of land can potentially bring large benefits if they are placed in the right locations and they are equitably and effectively managed. However, they are nevertheless not sufficient to adequately conserve most animal and plant species globally. We define adequacy as to have a sufficiently large part of their occupied range effectively conserved in order to qualify as non-threatened according to IUCN extinction risk criteria.

A lot of work went into creating these maps of conservation importance, not all of which is apparent from the manuscript itself. We created new global maps of species distributions, carbon, water, habitats and ecosystems and forest management all of which were integrated in a novel spatial planning framework. Here I want to particularly highlight our efforts in addressing the global 'blindness' towards plant diversity in conservation planning. We collaborated with some of the leading institutions and networks for assessing status and trends of plant biodiversity globally, such as Royal Botanic Gardens, Kew, Botanic Gardens Conservation International (BGCI) and the Botanical Information and Ecology Network (BIEN). In addition, we also actively engaged citizens through our networks to help filling crucial gaps in plant biodiversity data, such as for instance by dedicated NatureMap INaturalist campaigns. We specifically targeted those campaigns to countries that have high richness in plant species, especially endemic plants, and that, despite a good coverage of mobile phone users (and therefore potential for citizen science initiatives), still had relatively few plant observations in global biodiversity databases. We utilized these and other non-published data from museum records in a computational modelling workflow for creating estimates of species distributions at large scales. Yet, and to my surprise, despite all these efforts we were only able to make robust inferences about the distribution of ~41% of known plant species. While this effort was certainly unprecedented, it also highlights to me remaining crucial monitoring gaps that need to be further closed in the next decades.

So where does this leave us now? We presented truly integrated global maps of biodiversity and some nature's contribution to people and demonstrated that joint spatial planning can be a powerful way for combining different assets and data. These novel maps, which have been made available as part of the manuscript, and the quantitative approach presented, which is also made openly available, hopefully will prove to be useful for policy makers and a new resource for scientists in the absence of any higher resolved data. We plan to further expand this framework and apply it to national and regional contexts, where all relevant stakeholders are directly involved in the planning process, and more highly resolved data, especially socio-economic data and preferences, including tenure, governance, land-rights, people livelihoods, can be considered. I am looking forward to these opportunities and believe that data-driven planning can be a powerful tool to support governments and civil society organizations in how land should be best managed for the benefit of people and nature.

A metric for spatially explicit contributions to science-based species targets 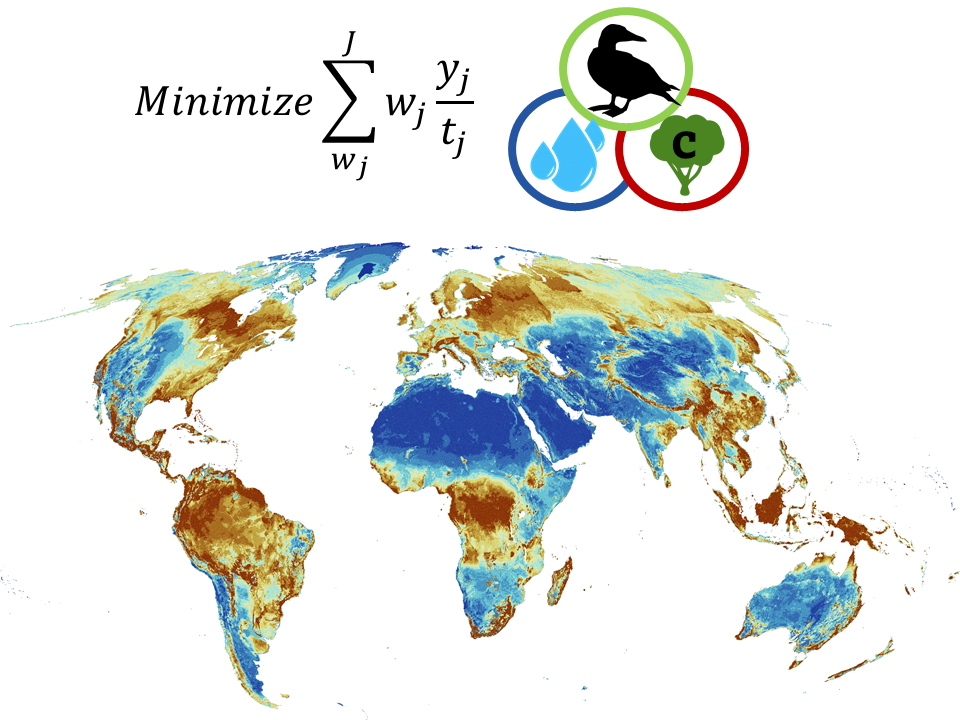 A novel approach and spatial data that investigates spatial synergies between managing land for the conservation of terrestrial vertebrate and plant species populations, carbon and water provisioning.