From parasitic mind control to feasting waxwings and bubble-breathing lizards, the second BMC Ecology and Evolution Image Competition has produced a spectacular collection of images that highlight the wonder of nature and the challenges facing our planet.
Jennifer Harman
Editor, BMC Series
Follow
Like Liked by Evelina Satkevic and 1 other
0

In 2022, researchers from around the world entered the BMC Ecology and Evolution photography competition. The contest produced a spectacular collection of photographs that capture the wonder of the natural world and the growing need to protect it as the human impact on the planet intensifies. This e…

We are delighted to announce the winning images of the BMC Ecology and Evolution photography competition. Like in previous years, the researchers who participated in this annual contest have, once again, produced a spectacular collection of images. The competition attracted entries from ecologists and evolutionary biologists worldwide from 17 countries eager to use their creativity to highlight the wonder of nature, the challenges facing our planet and their research. BMC Ecology and Evolution invited anyone affiliated with a research institution to submit to one of the following four categories: ‘Relationships in Nature’, ‘Biodiversity under Threat’, ‘Life Close Up’ and ‘Research in Action’.

Our Senior Editorial Board Members lent their expertise to judge the submissions, selecting the overall winner, best image, and runner-up from each category. The board members considered the scientific story behind the photos in addition to their artistic judgement.

Please enjoy viewing our winning images and discovering the stories behind the camera!

The story of a conquest. The fruiting body of a parasitic fungus erupts from the body of its victim. Attribution: Roberto García-Roa.

The overall winner captures something like out of science fiction - the fruiting body of a parasitic fungus erupting from the body of a fly. Roberto García-Roa, an evolutionary biologist and conservation photographer affiliated with the University of Valencia (Spain) and Lund University (Sweden), captured this unsettling image in the Peruvian jungle of Tambopata. Roberto explains that “spores of the so-called ‘Zombie’ fungus (e.g. genera Ophiocordyceps) infect arthropods by infiltrating their exoskeleton and minds. As a result, parasitized hosts are compelled to migrate to a more favourable location for the fungus’s growth. Here, they await death, at which point the fungus feeds on its host to produce fruiting bodies full of spores that will be jettisoned to infect more victims - a conquest shaped by thousands of years of evolution.” Senior Editorial Board Member Christy Anna Hipsley comments that this image depicting a parasite-host interaction “has a depth and composition that conveys life and death simultaneously - an affair that transcends time, space, and even species. The death of the fly gives life to the fungus”.

Relationships in nature - Best in category

Gone with the berry. Flying under the influence - a waxwing feasts on fermented rowan berries. Attribution: Alwin Hardenbol.

Alwin Hardenbol from the University of Eastern Finland, Finland took the winning image for the Relationships in Nature category. The photograph depicts a Bohemian Waxwing feasting on fermented rowan berries, demonstrating the strong relationship between the species. The presence of rowan berries influences the migration of waxwings, which can eat several hundred berries per day and have evolved larger livers in order to process ethanol produced by fermenting berries.

Trachops & Tungara. A bat locates its dinner via tuning into a frog’s broadcast to attract a mate. Attribution: Alexander T. Baugh.

Alexander Baugh, a behavioural biologist at Swarthmore College, USA, captured the runner-up depicting a predator-prey relationship at the Smithsonian Tropical Research Institute in Panama. Alexander comments that “This image illustrates how natural and sexual selection can be at odds. A male tungara frog (Physalalamus pustulosus) makes a tasty meal for a hungry fringe-lipped bat (Trachops cirrhosis) that detected and localised the frog by listening to the mating call.” These bats are specialised to hunt frogs, their hearing is adapted to their low frequency mating calls and their salivary glands may neutralise the toxins in the skin of poisonous prey.

Biodiversity under threat - Best in category

The Baobab tree. The relationship between a group of African elephants and a Baobab tree strains as droughts strike. Attribution: Samantha Kreling.

The Biodiversity Under Threat category winner was captured by Samantha Kreling from the University of Washington, USA, and shows African elephants sheltering from the Sun under a large baobab tree in Mapungubwe National Park, South Africa as droughts strike. Samantha Kreling said: “Baobab trees can live for more than 2,000 years and store water in their barrel-like trunks when water is scarce. The tree in this image has had its bark stripped by elephants seeking water. Although these trees are usually fast-healing, this damage is more than baobab trees can cope with as temperatures rise due to climate change. This photograph highlights the need for action to prevent the permanent loss of these iconic trees.”

Lindsey Swierk, an Assistant Research Professor at Binghamton University (State University of New York), submitted the runner-up for this category. Spring in the northeastern United States is arriving earlier and becoming more variable in temperature. This change poses a threat to many spring-breeding amphibians, including wood frogs. Lindsey explains, "Wood frogs (Rana sylvatica) are early spring breeders in temperate North America. Lately, wood frogs are breeding earlier in the year as climate change unseasonably warms early spring in the Northeastern USA. Unfortunately, winter storms can still catch frogs unexpectedly and trap them under the ice. Here, a male wood frog clings to an egg mass produced before a freeze; both the egg mass and the frog were recently trapped under ice. The frog survived, but many of the eggs did not." Senior Editorial Board Member Josef Settele comments, "I think it is important to realise that effects of major drivers of biodiversity change can also happen in counter-intuitive ways. In the present case, due to climate warming, there is an increased risk of the frog offspring dying because of cold/freezing (due to severe changes in phenology)."

Life close up – Best in category

The Life Close Up category winner depicts gliding treefrog embryos developing within their eggs in the Osa Penninsula, Costa Rica and was taken by Brandon André Güell from Boston University, USA. Brandon André Güell said: “The eggs in this image were laid by thousands of gliding treefrogs during an explosive breeding event triggered by a torrential rainstorm. If undisturbed, these eggs will hatch after six days of development, however the embryos can hatch early in order to escape threats such as predators and flooding.”

A photo of an anole lizard diving using a clever trick to breathe under water is the runner-up for this category, which was also captured by Lindsey Swierk. Lindsey comments that “Water Anoles (Anolis aquaticus) are small Neotropical lizards that escape to the water when threatened by predators. They can spend almost 20 minutes underwater, inhaling and exhaling a bubble of air that clings to their snout. Oxygen from this bubble is depleted over the underwater dive, which likely helps water anoles remain underwater for so long.”

Research in action – Best in category

Fieldwork with masks, rain, and tadpoles. Researchers investigate the effect of isolated trees and land use on tadpole-mediated nutrient recycling during the COVD-19 pandemic. Attribution: Jeferson Ribeiro Amaral.

The Research in Action category winner was taken by Jeferson Ribeiro Amaral from Cornell University, New York, USA and features two researchers from the State University of Rio de Janeiro, Brazil. The image, taken during a storm in the midst of the COVID-19 pandemic, depicts researchers performing fieldwork to investigate whether isolated trees can help mitigate the impacts of human activity by increasing the abundance of frogs and improving the circulation of nutrients within ponds. Jeferson Ribeiro Amaral said: “The researchers in this image are representative of so many others who carried on working throughout the COVID-19 pandemic. This image demonstrates their strength and dedication to understanding our world as they carry out their work despite thunderstorms and a global pandemic.”

Focus amidst the chaos. PhD student, Brandon A. Güell, amidst thousands of reproducing gliding treefrogs.

An image submitted by Brandon A. Güell was also selected as the runner-up for the 'Research in Action' category. The photo captures Brandon amidst thousands of gliding treefrogs, Agalychnis spurrelli, and their recently laid eggs on palm fronds. Brandon said: "This photo captures a treasured memory of the first explosive breeding event I observed, photographed, and collected data from for my dissertation research. Gliding treefrogs are of particular scientific and personal interest because of their understudied arboreal explosive breeding strategy and the diverse behaviours that may affect adult reproductive success.”

Many congratulations to all of our winners!

The winning images have been released under a Creative Commons Attribution License ( CC BY ), so everyone is welcome and encouraged to share them freely, as long as you clearly attribute the image author. 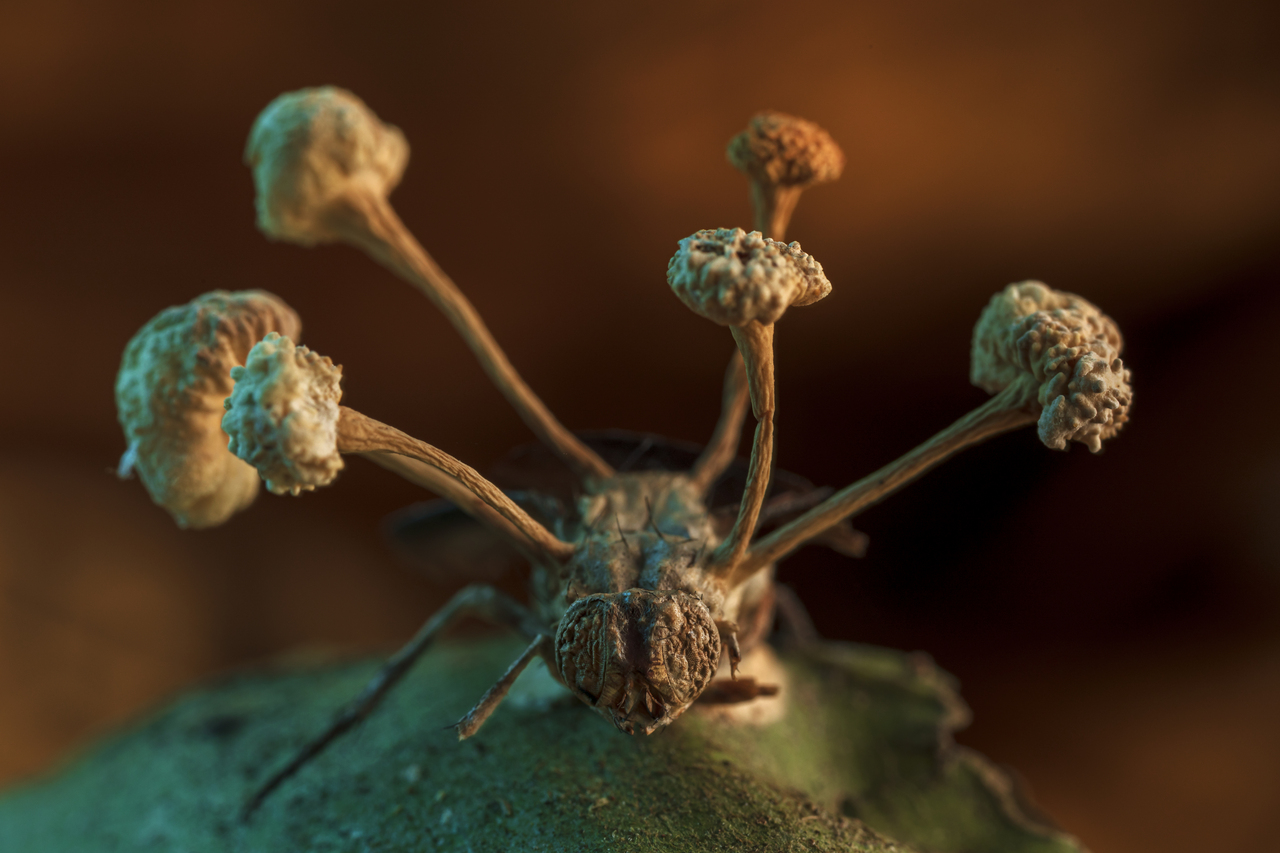 From parasitic mind control to feasting waxwings and bubble-breathing lizards, the second BMC Ecology and Evolution Image Competition has produced a spectacular collection of images that highlight the wonder of nature and the challenges facing our planet.