We describe how the inner ear evolved in ruminant through time, with contrasting results depending if the ecological optum reach or not the ecological opportunities. This blog is contributed together by Laura Dziomber and Bastien Mennecart.
Mennecart Bastien and Laura Dziomber
2 contributors
Like Liked by Evelina Satkevic and 1 other
0

Biodiversity erosion is a major present-day concern. The world is experiencing the 6th mass extinction event, in reference to the other five major extinctions known in Earth history, of which the 5th is best-known for the extinction of non-avian dinosaurs. All major families of vertebrates are impacted, including ruminants, a group of diverse hoofed-herbivores. Today, almost half of ruminant species are on the IUCN red list and classified from “vulnerable” to “critically endangered”. While the emblematic giraffe, reindeer, and gazelle species are vulnerable, the okapi and musk deer species are endangered. The Kazakhstan saiga and the large-antlered muntjac are, on their side, critically endangered. Understanding responses of species to variations of climatic conditions is of primary necessity to mitigate the effects of current and future climate change on biodiversity. Looking into past extinction or radiation events that had no anthropogenic impact is a way of disentangling the factors that impacted the evolution of the studied group.

Fig. 1. Paleontological and osteological collections of the Naturhistorisches Museum Basel (Switzerland) contain many specimens of ruminants. Here, I am looking at some duikers' skulls. Collections are most valuable to researchers, in order to access information. Photo: Océane Lapauze

Hello, I am Bastien Mennecart, a specialist of ruminant evolution and diversity. I currently work as an associate researcher with curatorial functions at the Natural History Museum in Basel, Switzerland. Since starting my PhD in 2007, I have been particularly interested in ruminants because this is one of the most diverse groups of large mammals today with more than 200 species. Moreover, looking into their evolutionary history, all the ruminants were saber-toothed before 18 million years ago! Today, still ca. 20 species retain elongated canines. For the last eight years, through two research projects granted by the Swiss National Science Foundation, I have been working on the ear region of the ruminants to better understand the global evolution of this group.

The bony labyrinth is the bony capsule protecting the inner ear. To get access to this structure, the studied specimens were scanned using a high-resolution X-Ray scanner and then virtually reconstructed in 3D, a process that can take up to one week for a single specimen depending on the preservation. This structure has been widely studied in ecological contexts, because of its function as  the center of hearing and balance. However, it has recently been demonstrated in birds (David et al. 2022) and turtles (Evers et al. 2022) that the semicircular canal shape and size is highly integrated to the brain and skull morphology, without high direct correlations with ecology. Similar lack of direct correlations was observed considering the head posture in ungulates (Benoit et al. 2020). During our first studies on this structure (2016), my colleague Dr Loic Costeur (curator at the NMB) and I figured out that the bony labyrinth almost fully ossifies early within the fetus gestation (around mid-gestation) in ruminants, involving a similar shape and size until the death of the individual. Moreover, despite huge similarities, the morphology of this organ differs in closely related species having similar ecologies. The morphology of the bony labyrinth is therefore a useful tool for phylogeny. We observed a gradual modification of the general morphology of the bony labyrinth through the tree of the deer (Mennecart et al. 2017). We were able to recover the topology of the tree observed with molecular data, while major inconsistencies are still remaining when comparing morphological and DNA data in ruminants. For example, the Megaloceros was recovered as a giant fallow deer and not a deer and the antler-less Hydropotes was the sister species of the roe deer not the basal most cervid. Studying the inner ear in an evolutionary frame was just at his beginning and a broader view was necessary to understand the factors affecting the evolution of this organ.

We decided to explore the maximum diversity of the ruminant through their entire history to better understand their broad evolution (Mennecart et al. 2022). This project involved a diverse team of colleagues from all around the world, from USA to Japan, including many European institutions and China. We collected more than 300 extant and fossil ruminant specimens - representing 190 species - from all around the world using X-ray computed tomography to understand the evolutionary mechanisms linked to the success or failure of the different families of ruminants through time. The complex 3D shape of the bony labyrinth was digitized in order to be mathematically studied using geometric morphometrics. As a first step, we confirmed that the shape of the bony labyrinth is a good predictor of species relationships and that it was little influenced by other parameters related to the animal’s way of life (such as head posture or locomotion). However, many questions remained.

We needed outstanding statistical analyses to solve these problems. Then, Mx Laura Dziomber (PhD candidate at the University of Bern, Switzerland) joined the team and performed these analyses. I have to admit, this was not an easy road to get to the final results. The dataset is massive and not all computers could handle it,  it took sometimes several days to process. With the precious help of Laura, we could increase our understanding of the methods and perform them. In fact, the evolutionary rates within the ruminant phylogeny was tested for significant shifts in the evolutionary rates (R package RRphylo). For example, the Tragulidae have a significantly low evolutionary rate throughout their entire history, which may be linked to their specific physiology and a general paedomorphosis in their morphology. In contrast, representatives of a typical radiative evolution (duikers) and insular species (insular deer) show an increase in their evolutionary rates. Moreover, 3D reconstructions of bony labyrinths reveal how factors related to the biology and ecology of the animals (ecological optimum) as well as to their living environment and biogeographic history combine (ecological opportunity) to explain the evolution of ruminants over time. The shape changes through millions of years are distinctively correlated to climatic parameters depending on the considered family (R package RPANDA). These results highlight that the bony labyrinth shape changes are driven by a neutral evolution. The different impact of the temperatures on the ruminant families is due to their different ecological preferences and of the colonization of new continents. As the study shows, the lineage containing the giraffe and okapi have high rates of evolution in warm climates where the environment and habitats are stable, while the Cervidae and Bovidae have higher rates in colder periods because habitats diversify strongly on a worldwide basis providing more ecological opportunities and thus promoting diversification.

In this context, climate warming and habitat loss are strong factors inducing the erosion of animal biodiversity. Contrasting scenarios observed for ruminants help us understand what is important for their conservation and protection under today’s climate change. Indeed, despite the current global warming, the potential increase in giraffids evolution induced by warmer conditions is countered by the impact of humankind, fragmenting their environments and controlling the populations. A special emphasis should be taken into consideration when considering the economically important cervids and bovids. The habitat loss induced by global warming and human activity may reduce their evolutionary rates and diversity, but also may increase their vulnerability. 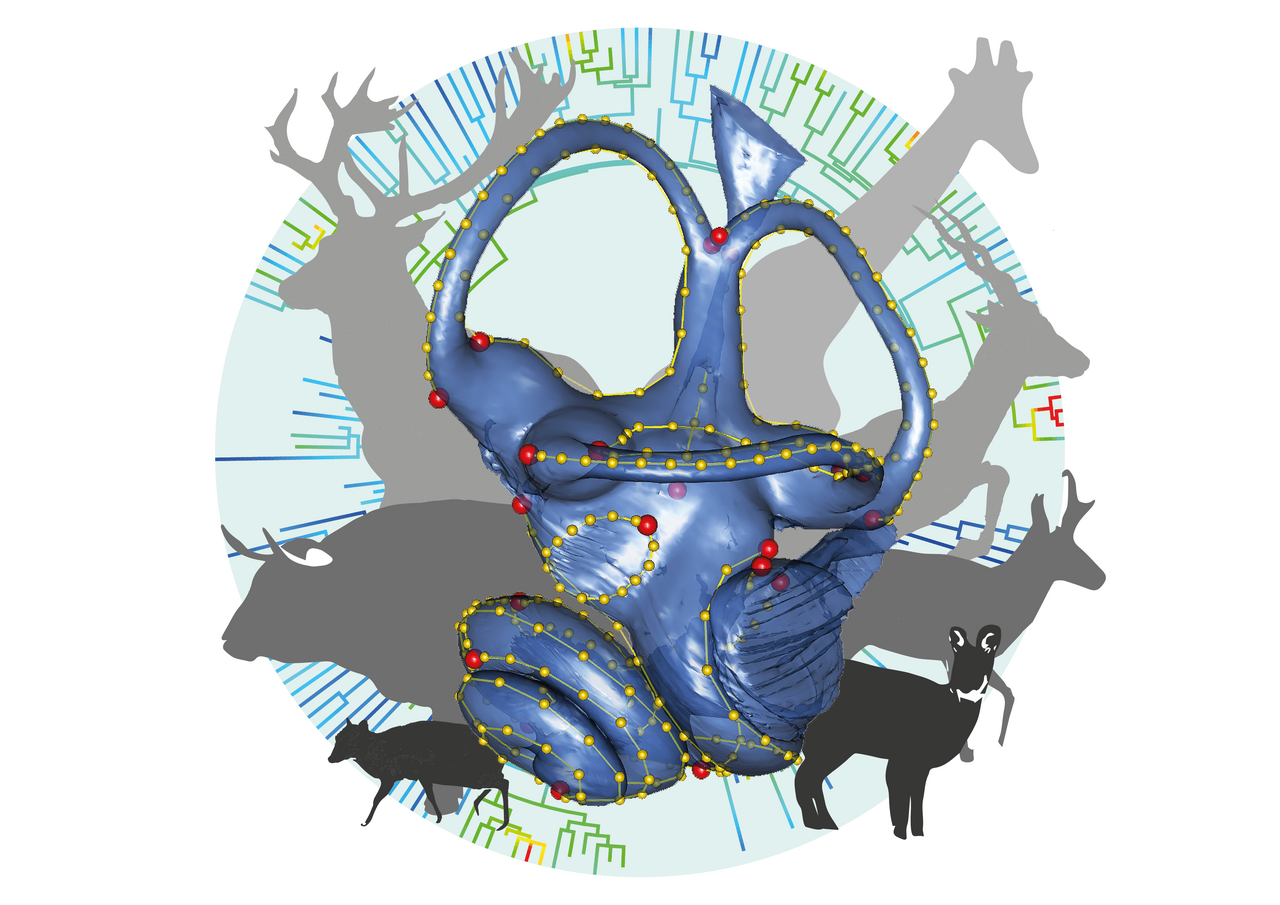 We describe how the inner ear evolved in ruminant through time, with contrasting results depending if the ecological optum reach or not the ecological opportunities. This blog is contributed together by Laura Dziomber and Bastien Mennecart.