We found a very large biomass of pelagic organisms in the deep sea suggesting a major carbon flux due to vertical migrations in the ocean. Animals migrate daily up and down, transporting carbon from upper layers to the deep sea, where it is sequestered.
Santiago Hernández-León and Carlos M. Duarte
2 contributors
Like Liked by Paolo
0

Zooplankton biomass in the dark ocean is thought to be low and weakly coupled to epipelagic primary production, but recent evidence suggests otherwise. Here the authors analyse data from the Malaspina Circumnavigation Expedition and published data to estimate bathypelagic zooplankton biomass and ass…

In the first decade of the century published estimates indicated that respiration in the deep sea was much greater than estimates of the carbon supplied from the upper, lighted area of the ocean could support. This carbon is supplied by the biological carbon pump (BCP), which exports organic carbon produced by photosynthesis to the mesopelagic zone (200-1000 m depth), where it may remain over decades, while a small part of the carbon sinking further to reach the bathypelagic zone (>1000 m depth), where it is removed from exchanging with the atmosphere over centennial time scales. However, there is also a, largely neglected, component driven by the diel and seasonal vertical migrations of the pelagic fauna (mainly zooplankton, decapods, and fishes), which raise in the water column to feed in shallower layers during the night and return to deeper layers by day. This process, referred to as an active carbon flux, could help explain the mismatch between estimates of sedimentary flux and the organic carbon supply required to meet respiratory demands in the deep sea.

Figure 1. Deploying the Multinet system used to capture zooplankton from surface to 3000 m depth during the Malaspina Circumnavigation Expedition on board the RV “Hespérides”.

We conducted the Malaspina Circumnavigation Expedition (Figure 1), to quantify the biomass of zooplankton in the deep sea and above, and estimate the active carbon flux involved across the ocean (Hernández-León et al., 2020). Sampling the deep ocean with nets is cumbersome, expensive (4 h of ship time to collect one set of samples), and provides low coverage, while acoustic methods, using echosounders mounted on the haul of vessels only survey the upper 700 m of the ocean.  We lowered an Acoustic Doppler Current Profiler, effectively an echosounder, with the sampling system used to collect water samples down to 4000 m. We could then obtain an acoustic survey of pelagic animals in the ocean every time we collected water samples down to 4000 m, which we did in 146 locations around the subtropical and tropical ocean. The effort paid off, as we first observed very high backscatter, signaling high biomass, reaching 4000 m depth below the equatorial upwelling in the Pacific Ocean (Figure 2), and the biomass increased, throughout the water column, as the primary production in overlaying waters increased. It was exciting!

Figure 2. Acoustic backscatter along the transect from New Zealand (left) to Hawaii (right) showing the high backscatter below the Pacific equatorial upwelling down to 4000 m depth.

Our results show that increased primary productivity leads to enhanced biomass in the deep sea fostering sequestration of carbon passed on through animals feeding in shallower layers to then be predated at depth by animals migrating from even deeper layers to reach the deep sea. The great Russian marine biologist Mikhail E. Vinogradov hypothesized this process over 60 years ago, and called it the “ladder of migration” (Figure 3). However, lack of data for deep sea pelagic animals precluded the test of this hypothesis until our work confirmed it.

Figure 3. Illustration of the Vinogradov´s Ladder of Migration concept. Vertically migrating zooplankton and micronekton support life far below the euphotic zone, driving energy and matter from surface waters to the deep sea.

Supporting the biomass of deep-sea zooplankton requires a minimum of 0.44 Pg C y-1 to be supplied, comparable to the magnitude of passive carbon sequestration, which itself is required to support deep-sea microbial carbon demands. Hence, the large zooplankton biomass pumps twice as much carbon in the deep-sea than hitherto believed. We can now explain the much larger biological activity in the deep sea than could be supported by the passive, sedimentary flux of carbon alone. The discovery of the major role of large migrant fauna to drawdown atmospheric carbon suggest that activating the abundance of pelagic animals, by increasing ocean productivity in a safe manner, can help mitigate climate changing. 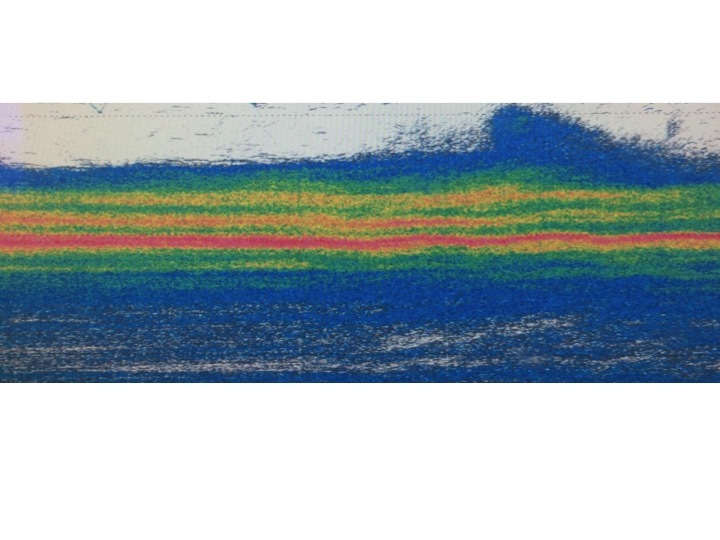 We found a very large biomass of pelagic organisms in the deep sea suggesting a major carbon flux due to vertical migrations in the ocean. Animals migrate daily up and down, transporting carbon from upper layers to the deep sea, where it is sequestered.