Sharks and rays are vital coral reef species. This study shows that nearly two thirds (59%) of the 134 coral-reef associated species are threatened with extinction. The main cause of their decline is found to be overfishing, both targeted and unintentional, and extinction risk is greater for larger…

I participated in my first IUCN Red List workshop about eight years ago, in Townsville, Queensland, Australia in February of 2015. I had just completed my Masters degree and was about to start a PhD with the same advisory team. I was excited for the opportunity to participate in the workshop and meet shark scientists from other institutions, including Dr. Nick Dulvy, a well-known name in the shark world and now my postdoc supervisor. The workshop was an excellent experience to learn from other experts and I loved being able to contribute. I did not participate in another Red List workshop until I started working for Nick in October 2019. I then participated in the workshops for deepwater species and Southeast Asian species, many species from the latter are included in our recent paper.

Red List Assessments are reviews of the available information on a species. Experts discuss what is known about the species (i.e., their ecology, reproduction, threats, conservation actions, and measures of abundance) and from this information, we determine the change in the population size, over three generation lengths of the species. Where information is lacking, we use indirect measures like changes in catch of sharks or rays, and fishing effort to infer population changes. IUCN Categories have clear cut-off points in percent change, so once this is established, we can confidently choose the category the species belongs in and determine if it is threatened or not.

Why and Where are Reef Species Threatened?

Of the 134 species of sharks and rays that occur on coral reefs, 80 species are threatened with an elevated risk of extinction, and 100% of these are threatened by fishing. The proportion of coral reef sharks and rays threatened is very high, much higher than for the group as a whole (1199 species – 33% threatened). The greatest number of coral reef sharks and rays occur in Southeast Asia and northern Australia. However, the highest percentage of threatened sharks is in the western Atlantic and the highest percentage of threatened rays occurs in Southeast Asia and southeast Africa. Areas with high proportions of threatened species are well-known to be areas with extreme fishing pressure, therefore, our results were not surprising. When species are assessed, their status is applied throughout their distribution, despite differences in population changes regionally. For example, the blotched fantail ray (Taeniurops meyeni) has declined significantly throughout the southeast Asian portion of its range but has a stable population trend in Australia. Thus, despite its status being Vulnerable, it is likely to meet the Endangered criteria in Asia but not meet any threatened criteria in Australia. This is why the maps of threat status should be used in conjunction with more localised information on abundance, like the baited remote underwater video systems results and analyses of the Global FinPrint Project (www.globalfinprint.org), to determine where to focus conservation actions.

When our recent paper was accepted to Nature Communications, I was in Panama City at the 19th Meeting of the Conference of the Parties for the Convention on the International Trade of Endangered Species (CITES CoP19). This CITES CoP was special for several reasons: (1) it was my first time attending a CoP, (2) there were four proposals that included 104 species of sharks and rays on Appendix II (the most ever), and (3) many colleagues were in attendance, including nine co-authors on our recent paper. IUCN Red List Assessments play a key role in decision making for CITES. They are used to determine which species may benefit from the protections offered by CITES listing, are heavily cited in proposals, and discussed by government officials when deciding whether to vote to support a proposal or not. Though not published prior to the CITES meeting, a representative of the IUCN Shark Specialist Group was present and able to speak about and answers questions related to any of the Red List Assessments for shark and ray species. In the end, all four proposals received support from at least two-thirds of the countries present, the minimum requirement to be adopted. Therefore, all 104 species now have strict requirements in order for them to be traded internationally.

The timeliness of these CITES decisions relative to the findings in our paper is excellent as an additional 104 species are listed on CITES Appendix II. This listing means that in order to trade species internationally, a permit is required. The obligations of the permit are: (1) the amount being exported must not be detrimental to the species’ survival (i.e., overfishing not occurring and not overfished), and (2) must be legally obtained (i.e., following local fisheries regulations). Additionally, when exported, the volume of each species being shipped must be recorded, which will provide more details on species-specific catch and trade. Prior to CITES CoP19, 18 coral reef associated species were listed on CITES Appendix II. Now, a further 21 species are listed, bringing the total to 39 species, almost one third of coral reef associated sharks and rays (~33%). Taking a deeper dive into these species, all but 5 are listed in a threatened category on the IUCN Red List. As of the publication of our paper, there are 80 coral reef associated sharks and rays that are in a threatened category on the IUCN Red List and almost half of them (43%) will soon have strict regulations for international trade, once the CITES proposals are implemented.

What Should We Do to Conserve Reef Sharks and Rays?

Steps like the recent CITES listings are great reminders and drivers for focusing on implementing fisheries management that encourages sustainable levels of catch for these species. Many of the reef species are widely distributed, meaning countries will need to work together to best manage them through regional level management. Localised marine protected areas (MPAs) have also been shown to successfully recover shark populations, but only if they are well-enforced. In addition to protection, there needs to be a focus on reducing human reliance on coral reef protein. This can be accomplished through new, cheap, alternatives for protein and alternative livelihoods for fishers.

I have been fortunate to have spent lots of time diving and working on coral reefs, some of the most beautiful places in the world. I have worked with and become good friends with people from coastal communities who rely on reefs for food and their livelihoods. I hope this research contributes to the push for conserving shark and ray populations on coral reefs and improving outcomes for people who rely on these reefs. 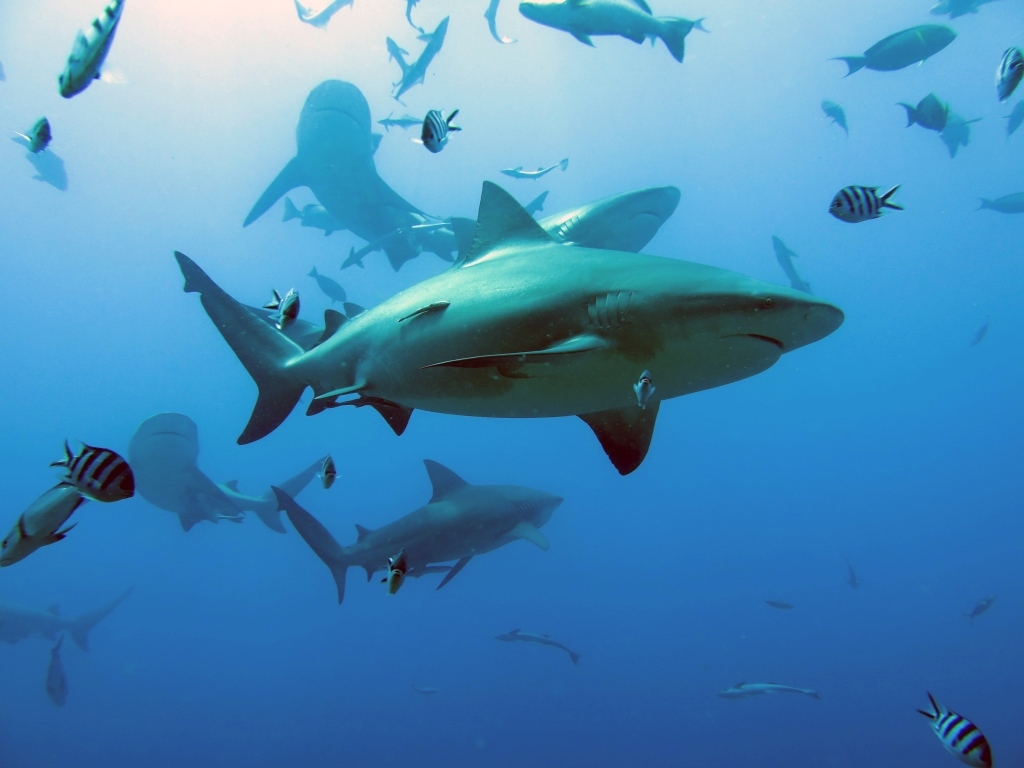