Martin Broadley
Professor of Plant Nutrition, University of Nottingham
Follow
Like Liked by Gao Jianguo and 1 other
0

Geospatial variation in the micronutrient composition (calcium, iron, selenium and zinc) of staple cereal grains is nutritionally important at subnational scales in Ethiopia and Malawi; these data could be used to improve surveillance of micronutrient deficiencies in the region.

Martin Broadley on behalf of the GeoNutrition Team

The GeoNutrition project team is delighted to see our new paper published in the journal Nature this week. This new study shows that the nutritional quality of the diets of people in Ethiopia and Malawi is influenced strongly by where they happen to live in those countries. This means that some people will be at a greater risk of dietary micronutrient deficiencies, or ‘hidden hunger’, than expected, especially those living in rural areas who are growing their own crops.

Micronutrients are the vitamins and minerals that our bodies require in small amounts and which are obtained from the food we eat. Micronutrient deficiencies increase the risk of disease and can impair the physical and cognitive development of children. More than half of children younger than 5 years of age in the world are likely to be affected by micronutrient deficiencies. It is therefore important to understand the many socioeconomic and natural factors which can cause hidden hunger, at different national and subnational scales.

Our team is based mainly in Ethiopia, Kenya, Malawi, and the UK. We began working together over a decade ago when Dr Allan Chilimba—a soil scientist working for the Malawi Government—showed that most of the population of Malawi is likely to be deficient in an important micronutrient, selenium. Selenium is an essential element required in trace amounts in the human body for various functions. Interestingly, a subsequent study co-led by Dr Alexander Kalimbira, a human nutritionist at Lilongwe University of Agriculture and Natural Resources (LUANAR), found that people eating crops grown on particular soil types in Malawi were less likely to be selenium deficient. Dr Dawd Gashu—a human nutritionist working in Addis Ababa University (AAU)—was observing a similar phenomenon in the Amhara region of Ethiopia at around the same time.

In 2014, we secured investment to support a doctoral (PhD) training programme from the Royal Society and the UK Foreign, Commonwealth and Development Office (FCDO). As part of this research capacity strengthening activity, involving institutions in Malawi, Zambia, and Zimbabwe, we were able to report the first national-scale survey of selenium status in Malawi. This study confirmed our earlier predictions of widespread selenium deficiency among the Malawian population, and showed that the risk of deficiency varied from place to place across the country.

In early 2016, our team approached the Bill & Melinda Gates Foundation to discuss our findings and ideas, and to pitch for investment in a multinational project to explore a wider range of dietary micronutrients, including calcium, iron, and zinc.

It is well known that different food crops have different nutritional qualities, for example, leafy vegetables typically contain more micronutrients than cereals. It is also well known that farmers and crop breeders can adopt ways to increase the nutritional quality of the crops that we eat. However, there is still a remarkable gap in knowledge about how the same food crop might differ in nutritional quality when grown in different locations within countries. This is despite well-documented examples of human deficiencies of some micronutrients, such as iodine and selenium, being more prevalent in certain geographical areas.

We began to use “GeoNutrition” to describe how soils and landscape features affect the nutritional quality of food and the Gates Foundation were enthusiastic about these ideas. Over a period of 18 months, we worked closely with their Agricultural Development and Nutrition teams, to refine and focus our ideas, and our project began in late 2017. We were also able to secure additional funding for a pilot project from the UKRI’s Global Challenges Research Fund (GCRF), and additional PhD studentships, thanks to strategic co-investment from both Rothamsted Research and the University of Nottingham’s Future Food Beacon.

The period from mid-2017 through to the end of 2019 was a remarkable period for us all. Working with field teams from Government Extension Services and local farmers in both Ethiopia and Malawi, we were able to sample cereal grains and co-located soils from more than 3000 locations. The logistics were immense, not least, due to the relatively short period of time during which mature cereal crops can be sampled from a standing crop in the field prior to harvest. Key trainers of the field teams included Dr Ivy Ligowe, whose PhD in soil science at LUANAR was funded by the Royal Society/FCDO programme, under the primary supervision of the Malawi GeoNutrition lead, Dr Patson Nalivata, and Dr Diriba Kumssa, a postdoctoral research fellow at Nottingham. The wider contributions of our project administrators, finance and laboratory teams in all countries cannot be overemphasised.

The anticipation and excitement of the imminent national-scale survey in Malawi in April 2018 was captured well by this article. Seeing the eight field teams with their vehicles, drivers, and sampling kit, in a supermarket carpark in Lilongwe, ready to depart for up to seven weeks in the field, will live forever in the memory. The daily updates from each of the team, both via WhatsApp and the Ethiopia and Malawi leads were inspiring.

An important and novel aspect of the current paper was the statistical design used for the sampling programme, developed by Professor Murray Lark at Nottingham. The target locations selected were guided by a spatial design, which sought to maximise the coverage of the area to be surveyed across the cultivated agricultural land of both Ethiopia and Malawi. The design also utilised crowd-sourced information, which had previously mapped crop production areas as part of the AfSIS soils mapping programme led by Dr Markus Walsh along with colleagues from Rothamsted Research and several CGIAR organisations who are also partners on GeoNutrition: the International Maize and Wheat Improvement Centre (CIMMYT), the International Crops Research Institute for the Semi-Arid Tropics (ICRISAT), and the World Agroforestry Centre (ICRAF). The cereal grains and soil samples were sampled, with the consent of the farmers, and then prepared and analysed in several laboratories during 2018 and 2019. An extended period of data management, data analysis, and visualisation activities including mapping continued into 2020.

A remarkable observation from the paper is that a person living in a village in the western part of the Amhara region, Ethiopia, or in the central region of Malawi might receive 10% of their required daily amount of selenium from a typical dietary grain consumption pattern. In contrast, a person living in the eastern part of Amhara, or in the Shire Valley area of Malawi, can receive 100% of their required amount of selenium from an identical diet based on the same quantity of cereal consumed. We also found large variation in the calcium, iron and zinc concentration of the same cereals. We are able to show linkages between soil properties and grain quality, and between grain quality and biomarkers of micronutrient status in both countries. These linkages made use of data from a recent study by Adamu Belay, a PhD student based at AAU and funded by the GeoNutrition project, who is working on selenium, zinc, and other micronutrient biomarkers in people.

What next? There are some inspiring wider ongoing project activities still to complete. These include the work of 10 PhD students who will be completing their studies over the next 12–24 months, in the areas of agriculture, bioethics, community nutrition, economics, and statistics. Recent papers by Adamu, Blessings Likoswe, Christopher Chagumaira, Lester Botoman, and Mesfin Kebede are among our recent project highlights. The results of a large community-based randomised control trial, led by Dr Edward Joy at the London School of Hygiene & Tropical Medicine and Dr Alexander Kalimbira, will be reported soon.

Related projects are now ongoing with colleagues in Pakistan, Zambia, and Zimbabwe. We are also working with project partners to develop policy briefs to support investment decisions by the governments of Ethiopia, Malawi and beyond. This work is benefitting from the Micronutrient Action Policy Support (MAPS) project, also funded by the Gates Foundation, led by Dr Louise Ander at Nottingham

The inequities of micronutrient supply must be tackled urgently.  There is no “silver bullet” solution, because of the diverse underlying causes, both natural and socioeconomic.  What this study establishes is that the variations in space, resulting from soil and other environmental factors, cannot be ignored. As a plant nutritionist, I hope to see crop micronutrient quality become a routine component of future agricultural and nutritional surveillance programmes. This can then help inform policies to support healthier diets, including through education, dietary diversification, crop breeding, agronomy, and food fortification. 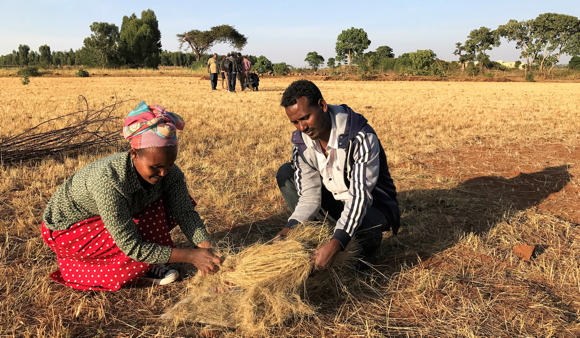