Transposons are accepted as evolutionary catalysts but how they do so remains unclear. Analysis of 100 animal genomes leads to the discovery that terminal inverted repeat-type transposons catalyze new gene structures and new genes in animals via transposition-independent and -dependent mechanisms.

I was just a junior student when I learned the knowledge of Transposable Elements (TEs) for the first time, from a textbook “Genetics” writing by Zudong Liu. I still remember that in the final exam of this course, one question was to list three scientists who have made great contributions to Genetics, and whose last names all start with the letter “M”. One scientist is Barbara McClintock (and the other two being Gregor Johann Mendel and Thomas Hunt Morgan). She was awarded the 1983 Nobel Prize in Physiology or Medicine for her finding of TEs in maize. Now we know that TEs, including DNA TEs and retrotransposons, are widespread in eukaryotic genomes. I had never thought that one day I would do related research on these jumping elements, seemingly annoying and junky for many researchers.

The textbook of Genetics and Dr. Barbara McClintock shown in her laboratory. Photos are from Baike  and Wikipedia.

I then joined Zhang Lab in the Institute of Zoology, Chinese Academy of Sciences after my graduation. The interest of our group is how new genes emerge and how they drive phenotypic evolution. My first project was to investigate the dynamics of retrocopies in Drosophila melanogaster populations by analyzing the re-sequencing data. These copies are duplicates through RNA intermediate in a process mediated by retrotransposons (retroposition or retroduplication). During the investigation, one thing surprised me where I always found LTR (long terminal repeat) TE sequences at the ends of retrocopies. Moreover, I often found microhomology sequences at the fusion points between mRNA and LTR TEs. Such phenomenon was seldom observed in L1-mediated retroduplication (a well-known process involving non-LTR TEs) in mammals. I then switched my interest to investigate how TEs catalyze duplications and started to read papers on the gene duplication mechanisms. The more knowledge of TEs I learn, the more important TEs are I realize in evolution. In short, we found that LTR TEs did participate in the generation of RNA level duplication, and we proposed a new model dependent on “template switch” to explain that. Thus, both LTR and non-LTR retrotransposons (such as L1) mediate the retroduplication of host mRNAs in animals.

I have to say that my research is intertwined with TEs. When I finished the project and started to investigate other types of gene duplications in D. melanogaster populations, I found a duplicated gene Ssk flanked by TIR (Terminal Inverted Repeat) TE sequences, i.e., FB4. This chimeric gene structure is very similar to that of retrocopies, and we could also identify microhomology sequences at the fusion point. These results spark my enthusiasm for a continuing investigation on how DNA TEs catalyze duplications.

Among DNA TEs, Helitrons duplicate non-TE sequences in animals, whereas TIR TE-mediated duplications have often been studied in plants but not in animals. We herein consider whether Pack-TIRs (non-TE sequences with flanking TIR TEs, named after Pack-MULE in plants) are present across animal taxa, and if so, how they emerge and whether they are functional. We identified a conservative dataset including 370 Pack-TIRs in 100 animal reference genomes. We found that single-copy Pack-TIRs were mostly generated via a transposition-independent gap-filling process, whereas the birth of multicopy Pack-TIRs is compatible with a new model, which we described as replication Fork Stalling, Template Switching and Transposition (FoSTeST, named after FoSTeS model in human genetics).

Therefore, our results together with previous efforts show that both DNA TEs and retrotransposons catalyze duplications in animals. Despite their different transposition mechanisms and distribution across species, DNA TEs and retrotransposons share similar features. First, template switching during the gap-filling, FoSTeST, or LTR-mediated process is also commonly observed in the duplication process mediated by L1s and Helitrons. Second, duplicates flanked by TEs could act as pseudo-TEs and amplify via further transpositions, such as the Ssk-FB4 family mediated by TIR TEs, the AMAC family mediated by SVA and the CG17604_r family mediated by LTR TEs. Thus, I would like to use the following cartoon to summarize the template switching process observed in different models. The marble pillar called “Hua Biao” is a traditional architectural form in ancient China, which is usually decorated with a dragon and flowing moire. We use the blue pillar to represent a host DNA (or RNA) template and the red pillar to represent a TIR (or LTR) TE. Representing a replicating DNA (or RNA) strand, the awakened dragon shuttles in the pillars, and becomes a colorful creature. The dragon could fly to other places, like a transposition process of a pseudo TE. The template switch process for TIR-mediated (or other TEs) duplication.

I also would like to thank the co-workers, Jinbo Wang, Mengxia Wang and Yaqiong Zhang for their hard work to identify the function of the youngest Pack-TIR, Ssk-FB4. In the past years, they have tried to knock out Ssk-FB4, do outcrosses to control off-targets, generate a rescue strain, and perform phenotyping. These experiments seem to suggest that Ssk-FB4 is involved in stress response. However, the phenotypic effect is not stable and thus we had to remove this part of the data from the final version of the manuscript.

This is not the end of the TE story. Several related projects keep going in our lab. There are treasures waiting for us to dig in these “junk” DNAs.

And also the story of LTR-mediated duplication here. 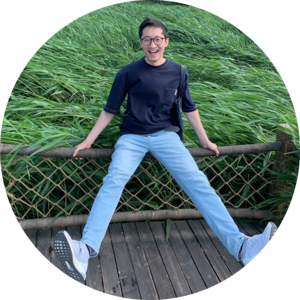 I was graduated from Nanjing University. I am now an associate professor in the Institute of Zoology, Chinese Academy of Sciences. I am interested in how new genes emerge and how they drive phenotypic evolution. I am also interested in how TEs catalyze duplications.