Background Sharks and rays are some of the most threatened marine taxa due to the high levels of bycatch and significant demand for meat and fin-related products in many Asian communities. At least 25% of shark and ray species are considered to be threatened with extinction. In particular, the densi…

Who would have imagined that scientific concepts showcased in Crime Scene Investigation can potentially detect species that were once thought to be locally extinct? However, did you know that these molecular technologies can really be used to rediscover animals that have seemingly vanished, but are in fact leading private lives amongst us? As unimaginable as it sounds, the transformation of television fantasy to reality is now possible with recent environmental DNA (eDNA) tools. Akin to a crime scene scattered with clues (e.g., hair, fingerprints, and bodily fluids), the natural environment is chocked-full of trace DNA, be it from faeces or skin that have been released or shed by animals and plants that live in it. This trace genetic material, or eDNA, is detectable with molecular tools from a wide variety of environmental samples, ranging from seawater, soil, snow and even air. In the last five years, eDNA methods have become exponentially popular due to its broad applicability to address a wide range of scientific questions—from being hot on the trail of invasive species, to beating the bushes for biomonitoring endangered and elusive species.

Just six years ago when I was an undergraduate, the technology was in its infancy with just a handful of ‘proof-of-concept’ studies from freshwater and temperate marine water samples. Having just taken the first few baby steps into research, this technology was completely new to me and it was then that I entertained the thought, “I wonder if eDNA works in Singapore’s highly sedimented and tropical marine waters? Perhaps we may find more than the eye can see.” I was amazed by the revolutionary possibility of just collecting and sequencing seawater to reveal the organismal composition without having to physically observe them. Fast forward three years later, I managed to develop the pioneering eDNA protocol for detecting marine animals in Singapore at the Reef Ecology Laboratory, National University of Singapore. One fine morning during breakfast, our research fellow, Benjamin Wainwright, approached Marc Chang and I to ask if we were interested in testing my protocol for evaluating the diversity of sharks here. As an avid recreational diver with a particular fascination with large pelagics, I found this proposal extremely intriguing, and saw this as a perfect opportunity to test our recently developed eDNA protocols on conservation-related applications. Funny how our lab conjures the most exciting project ideas over mealtimes!

We learnt from our collaborators, Zeehan Jaafar and Kelvin Lim, that there used to be a much higher diversity of sharks and rays, based on records kept at the Lee Kong Chian Natural History Museum, Singapore, as compared to recent citizen science sightings. In the past, there were large elasmobranchs like whale and bull sharks despite the tremendous amount of shipping traffic in our port waters. Encounters nowadays, are sadly rare and are mostly by chance. It really made me wonder if these big charismatic fishes were driven to local extinction because of our island-city’s rapid coastal urbanization, or if they are merely seeking refuge elsewhere? These constitute the dark diversity—species that have been historically reported and still exist in the greater surrounds of their known geographic ranges but are presently missing from a specific area. Or it could also be phantom diversity—extant species that are locally colonised but have become too rare to be detected by regular survey methods.

We decided to apply our established eDNA protocol to reassess the shark and ray diversity in Singapore, as detailed in our paper published in BMC Ecology and Evolution. The fundamental questions we asked were: Can eDNA reveal more elasmobranch diversity than visually observed? Will the sequencing data be able to help make better informed management decisions in the future? One of the critical components for eDNA’s success is the availability of a robust sequence database for matching of our eDNA sequences. These will allow meaningful inferences of species identities, and we chose two gene regions for this purpose – 12SV5 and COI, as these reference sequences were well-represented in global databases. Since elasmobranchs are expectedly rare, we collected almost 100 water samples from across 9 sites, so as to broaden our scope of detection.

The most compelling result from our eDNA study was that we found up to 47 putative species, and managed to detect 16 sharks and rays with species-level identities. This is phenomenal, as eDNA found two times more species than the 7 (3 sharks and 4 rays) typically observed over the last twenty years. Comparing this updated species list from eDNA against the historical records, we found that the phantom diversity of sharks and rays have been considerably reduced by more than 20% after using eDNA. What is even more interesting is that our eDNA results uncovered two potential new species records! Of course, these records require further verification, possibly with evidence from sightings and proper identification of specimens by taxonomic experts. Nevertheless, the sensitivity of eDNA tools surpassing that of conventional sampling methods to uncover so much more elasmobranch diversity was extremely exciting for our team.

Our study has thus led to a deeper understanding of elasmobranch diversity in Singapore. We learned that the blacktip reef shark is extremely abundant, and there are still large body-sized species like bull sharks roaming our waters, albeit secretly. Further, we were able to make coarse relative abundance inferences of these species with normalised sequence read counts. We believe these will have implications for future work in conservation and formulation of management strategies.

It is increasingly apparent that eDNA metabarcoding methods hold enormous promise in revolutionizing the way we conduct species biomonitoring, community assessment and biodiversity conservation. With the rapid emergence of newer sequencing technologies, eDNA is now progressively applied to address a much wider array of different questions than ever before. Entering this exciting era of genomic research, we are highly encouraged by our study’s success in improved elasmobranch detection, and I feel extremely lucky to be able to conduct research work on a topic that I am passionate about. In the face of rising extinction rates, I look forward to continue using eDNA to complement conventional methods for improved species monitoring and to protect our natural heritage. 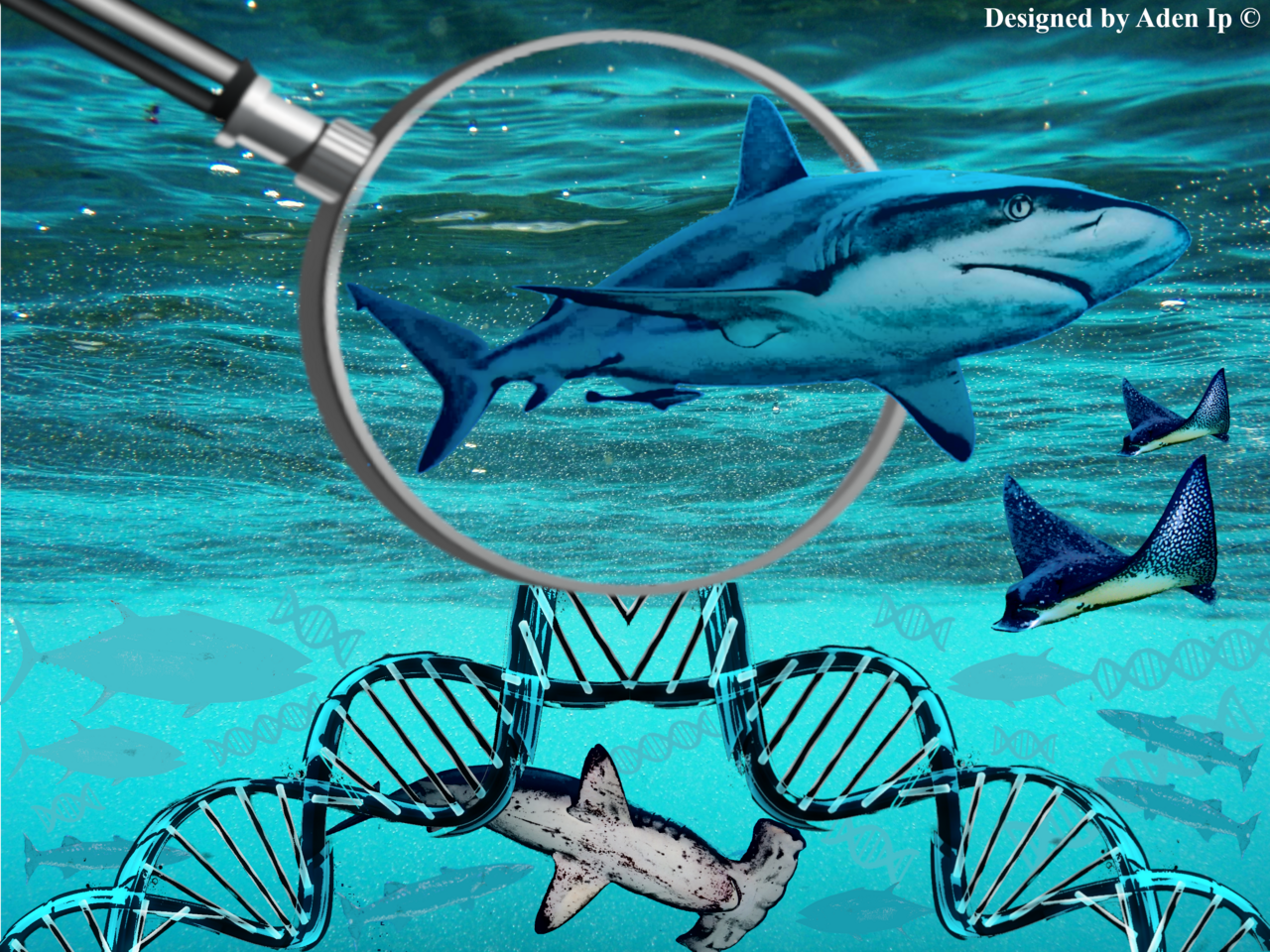