The Olorgesailie Basin has a long, rich history of fossil and archaeological finds first brought to prominence by Mary and Louis Leakey in the 1940s. The sedimentary outcrops in the basin provide records of anthropological and environmental change that capture the last 1.2 million years, covering transitions in species, technology, cultural behavior, and major habitat shifts. In 2012 the Olorgesailie Drilling Project (ODP), organized by Rick Potts of the Smithsonian Human Origins Program, drilled the nearby Koora Basin to recover a sediment core that captures nearly continuous sedimentation throughout the past one million years, including lake and floodplain deposits and soils that cover a large hiatus in the outcrop record. During the time represented by this erosional period, a massive faunal turnover took place involving about 85% of mammal species coincident with the complete replacement of the long-enduring Acheulean stone technology by the distinctive behaviors of the African Middle Stone Age, the technology associated with early evidence of our species, Homo sapiens (Brooks et al., 2018; Potts et al., 2018). The rich drill-core archive has allowed our research team to capture high frequency environmental changes to examine climate variability and to test hypotheses about faunal and human evolution (Lupien et al., 2021).

But I didn’t know any of that until I started graduate school two years after the drilling even took place...

My interest in paleoclimatology led me to work toward developing our understanding of the effects of Earth’s orbit around the sun on eastern African climate. The amount and distribution of insolation, or the solar radiation reaching the surface of the Earth, are the major drivers of our climate system, influencing everything from glacial-interglacial cycles to monsoons to the location of rainforests and deserts. This led to my involvement in the ODP where I was to reconstruct the climate dynamics and vegetation using leaf wax biomarkers to characterize the effects of insolation on the basin.

Since drilling in 2012, the ODP team has made great strides in understanding the climate, terrestrial environment, and lake conditions of the basin with numerous proxies and impressive collaboration. In 2020, Potts’ team published the initial multi-proxy findings in Science Advances (Potts et al., 2020). This work provided a powerful characterization of the whole, dynamic basin, and demonstrated that there was an increase in environmental and lake variability surrounding the earliest onset of the Middle Stone Age.

There was more to be learned, though, with the powerful organic proxies that I use to reconstruct climate and environment. Obtaining high resolution sampling throughout many orbital cycles was crucial for answering our questions on the climate and overall environment, and could address how the dynamics of insolation and the regional monsoon system impacted human and faunal evolution. This long sediment core, paired with high-resolution, quantitative analyses, allowed us to study multiple ‘variability packets,’ which are intervals of time of particularly high-amplitude climate variability, driven by the eccentricity (or circularity) of Earth’s orbit. Packets like these have been hypothesized to drive evolutionary change (Potts and Faith, 2015), and indeed we found that high amplitude vegetation variability that involved shifts in the proportion of grasses and trees corresponded to the time of the first Homo sapiens in eastern Africa.

Because of the length and quantitative nature of our records that were recently published in the Journal of Human Evolution, we were also able to tease out the influences on the region from global climate conditions, such as the glacial-interglacial cycles. This work opens up more research avenues as it creates further questions on the relative importance of regional and global climate on basin-scale vegetation dynamics, and thus the habitats and resource bases of our hominin ancestors.

This study involved ODP team members, a Brown University senior thesis student, my PhD and postdoctoral advisors, as well as my PhD external reader, meaning it really was a whole academic life collaboration and a downright pleasure to work on. 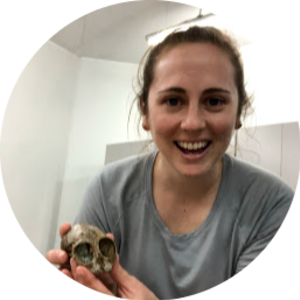