Evolution and dispersal of snakes across the Cretaceous-Paleogene mass extinction

What happened to snakes in the extinction that wiped out the dinosaurs? 66 million years after an asteroid impact changed the course of evolution, little evidence remains to solve this mystery. But in solving mysteries, one line of evidence is less powerful than drawing on many lines of evidence.

WHAT happened at the end of the Cretaceous?

66 million years ago, an asteroid hit the Earth, kicking up enough dust and soot to plunge the world into months of cold and darkness. Vast numbers of species are thought to have disappeared- perhaps 90% of all species on Earth. What went extinct, and what survived, and why? How did the ecosystem and diversity rebuild in the aftermath?

The end-Cretaceous mass extinction and its aftermath were arguably the defining evolutionary event of the past 100 million years. But our record of this event is woefully incomplete. A few animals preserve well as fossils- dinosaurs have big, heavy bones; mammals have durable teeth- but most species don't. What happened to everything else?

Snakes, for example, are a diverse group with around 4,000 species. Were they and other small animals relatively unaffected- as traditionally thought- or did the extinction hit them too?

It's a difficult problem, and we don't have a lot of evidence. It's a mystery. So.

How do you go about solving a mystery?

In fiction, like the Sherlock Holmes mysteries, a single deduction solves the crime; one line of evidence and reasoning leads unerringly to the truth. Our hero Holmes points out the "curious incident of the dog in the night-time", to which his Scotland Yard counterpart replies that the dog did nothing. Yes, Holmes argues, "that was the curious incident." The dog did not bark because the thief was known to it. Case closed.

This makes for satisfying fiction. In reality, solving mysteries is far more complicated, and staking everything on a single line of evidence can lead you to the wrong suspect. Many false convictions, for example, are based on a single, tenuous line of evidence- eyewitness accounts (notoriously unreliable) or "expert testimony" that's based on junk science. DNA is far more reliable, but even DNA isn't infallible— it can produce false results on the basis of contamination, an incorrect match, or someone could even have planted the evidence.

So if you want justice to be done, but don't want to mistakenly arrest and convict the wrong person, how can you be confident you have the right person? Good detective work and a solid case for the prosecution don't rely on any single line of evidence; they rely on multiple lines of evidence. Imagine that an investigator has assembled many different lines of evidence pointing to a single suspect. We have an eye-witness identification. A fingerprint at the scene. A fiber from the victim's sweater on the suspect's shirt. Mud from the victim's driveway on the suspect's car. A receipt for the purchase of a weapon. Cell phone records put the suspect's phone in the area. Now throw in DNA evidence on top of that. By themselves, any one of these lines of evidence could be wrong. But what are the odds that all of them are wrong, and wrong in the same way-  all incorrectly pointing to the same person? Well beyond any reasonable doubt.

This, I'd argue, is also what reliable inference looks like in science- not a single line of evidence or analysis, but multiple lines of evidence.

This, for example, is how Darwin went about making the case for evolution. Darwin focused on lots of different lines of evidence- anatomy, systematics, fossils, biogeography, selective breeding— and showed that all of them were consistent with the idea that species changed over time. Similarly, Alfred Wegener's discovery of continental drift didn't just focus on the way the continents seemed to cleverly fit together like a jigsaw puzzle. Wegener also showed that there were similar sorts of rocks on either side of the Atlantic, suggesting that these rock units had broken apart; and that similar fossils existed in ancient rocks, implying a single biogeographic province, back when the continents were united.

So. Back to snakes.

We had a number of lines of evidence, each with its own strengths and weaknesses. We had fossils, but the fossil record is highly incomplete, with lots of gaps, and unevenly sampled. How reliable is it?

In our new paper, published in Nature Communications, the approach we used in designing the paper was to look at all of these and look for consilience between them. And, we found agreement between these different lines of evidence- fossils, DNA, and biogeography.

The fossils show that a number of archaic snake species disappeared at the end of the Cretaceous, and new groups appeared in the aftermath.

The molecular data shows that a handful of snake lineages extend back into the Cretaceous- implying many groups went extinct at the boundary- with many new groups appearing in the aftermath, implying that there was a radiation in the aftermath.

And curiously, the biogeographic data suggests that snakes suddenly arrived in Asia around the time of extinction- a place snakes hadn't been seen before.

All three lines of evidence- fossils, DNA, biogeography- imply that something big happened 66 million years ago, with lots of extinction, followed by rapid evolution. That's not to say we can be 100% confident of this hypothesis, but when different lines of evidence are converging on the same hypothesis, one can be far more confident that we're on the right path.

There's a tendency towards specialization in science, but becoming overly reliant on a single methodology can blind us to its weaknesses. Becoming overly focused on a single study system, we might fail to see how we're misreading the data- or, perhaps, less confident in our conclusions than we should be. A generalist approach, I'd argue, allows us to be much more confident. 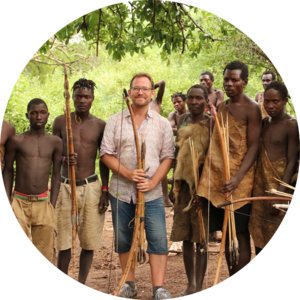 I'm a vertebrate paleontologist and evolutionary biologist with an interest in mass extinction, adaptive radiation, and biogeography.

I'm interested in large-scale change in evolution- macroevolution- like the evolution of complex adaptations (flight, human intelligence), the role of catastrophes in driving extinction and diversification, and biogeographic processes, specifically oceanic dispersal. I think the standard view of macroevolution- "lots of microevolution"- is probably wrong, since over long enough periods of time, highly improbable, high-impact events play a major role in evolution.

I work on a variety of different organisms- dinosaurs, pterosaurs, fossils birds, mosasaurs, snakes, and sometimes Homo sapiens. I do a lot of popular writing, mostly for the Conversation. I suspect aliens probably exist elsewhere in the universe, but they're too far away to talk to.