Evolution meets biophysics in the early history of transthyretins

Transthyretin, the primary thyroxine carrier in the cerebrospinal fluid, has been known since the forties, but the discovery of homologs in C. elegans and several microorganisms in 2000 revealed an interesting evolutionary history, now studied by structural biology.

I first met transthyretins as a PhD student, when my friend Daniella Trivella, now a scientist in the Brazilian synchrotron campus, was studying how human transthyretin and its amyloidogenic mutants could be stabilized by natural products. Many times we travelled to the synchrotron, back in the day when data collection was not automated and we needed teams of 3-5 people that made shifts so we could use all beamline time we could 24h/day, and while I considered a victory to get anything barely worth collecting, a 2A diffracting crystal was a bad one for her. Transthyretins were a crystallographer's dream: they produced amazing diffraction and curious problems to solve - the fact its binding sites lied on a two-fold axis, interpreting the electron density maps to fit ligands was tricky, and it was fun to participate in her project.

Transthyretins and me met again when I was very interested in methods to detect residue correlation in protein family alignments, at the time tweaking those already available in order to detect functionally important sites from protein sequences. The UFRJ group, which have published many papers on transthyretin biophysics, had just crystallized them in the presence of zinc, which affected its structure. Were those zinc binding sites just a crystallization artifact or they had any biological relevance?

Correlation among the zinc binding sites residues suggested the second interpretation, and a study from Universidade do Porto, in Portugal, found out zinc could be the missing link for transthyretin's function as a cryptic protease: it was the structural rearrangement due to zinc binding that would position the catalytic residues in their active conformation. The more I learned about them, it became clearer that there were much more interesting things about transthyretins than 2-fold axes.

It was not only its different functions, but also its evolutionary history: Samantha Richardson's group found transthyretin homologs in C. elegans, S. pombe, S. dublin, and E. coli, and soon those transthyretin-related proteins were found to be involved in the uric acid degradation pathway, and renamed 5-hydroxy-isourate hydrolases, or simply HIUases. Comparative genomics suggested that an ancestral HIUase gene duplicated in the evolution of vertebrates, the second copy accumulated substitutions that enabled thyroxine binding, and later in the original HIUase gene was lost in the human lineage, after the loss of the first gene in the pathway, which coded for uricase.

When I joined UFMG in 2010, my first project was developing my own methodology for residue coevolution analysis, focusing on the detection of putative sub-class determinants in protein families. Paralogs that could perform completely different functions were the perfect test case for us, and so I came back to the transthyretins. With funding opportunities happening, it seemed like a good moment to do wet lab work besides residue frequencies number-crunching. At the same time I found out Ancestral Sequence Reconstruction studies had become somewhat affordable with modern gene synthesis facilities, and so, with PhD student Lucas Carrijo and post-doc Mariana Costa, we decided to explore the evolution of this protein family by characterizing selected reconstructed ancestors.

From a phylogeny of vertebrate HIUases and transthyretins, we selected three points for ancestral reconstruction: the common ancestor of all sequences, before the duplication; the reconstructed ancestor of all transthyretins, to evaluate the effect of the early substitutions after duplication; and finally the reconstructed ancestor of Eutheria transthyretins. With our budget, we didn't have a lot of margin for error, so it was a very pleasant surprise when all three proteins were expressing well in E. coli and two of them (luckily the two most relevant for what we were looking for) were prone to biophysical characterization and produced excellent crystals for x-ray diffraction. And so we could discuss the early story of transthyretins, illustrated with high resolution structures, infer the binding mode of 5-HIU to the likely common ancestor of vertebrate HIUases and transthyretins, observe how thyroxine probably interacted with early transthyretins, and discuss other aspects from this interesting protein family. The study, published in the Journal of Molecular Evolution, can be found here. 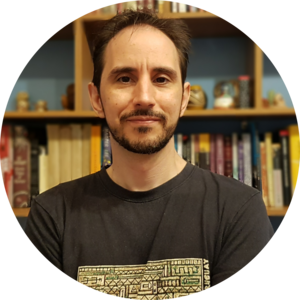