Invasion ecology has long held the view that exotic species can become successful through escaping from natural enemies. We challenge this belief through a large-scale mesocosm experiment showing that exotic plants dominate communities in which they occur despite accumulating and sharing herbivores.
Warwick Allen and lauren waller
2 contributors

A long-standing tenet of invasion ecology is that exotic plants often become successful through escaping from their natural enemies, known as the Enemy Release Hypothesis. However, studies that have tested whether exotic species escape (known as “community enemy release”) or attract (“biotic resistance”) natural enemies relative to co-occurring native species have so far produced mixed results. This ambiguity may be because studies often examine a relatively low diversity of plants and enemies from the community, overlook the potential for indirect interactions (i.e., sharing of herbivores between plant species), and do not consider how herbivore load and damage translates to impacts on plant biomass.

As part of the Bio-Protection Research Centre in Aotearoa-New Zealand, we set out to conduct a comprehensive test of whether direct and indirect plant-herbivore interactions systematically favour exotic plants. To answer this question, we established 160 experimental plant communities, each containing eight plant species selected from a pool of 39 plant species (19 natives, 20 exotics) that co-occur in Aotearoa-New Zealand grassland communities. We collected and reared 20 species of invertebrate herbivores and created identical mixtures that were added to half of the pots, all of which were enclosed in 2.2 m tall mesh cages. The herbivores used were a mixture of 7 native and 13 exotic species from a range of feeding guilds (i.e., chewers, scrapers, suckers, and miners), including Sitona spp. weevils, New Zealand grass grub (Costelytra giveni), three species of leafroller caterpillar, several exotic aphid species, and the native grasshopper Paprides nitidus. Most of the herbivores were polyphagous, meaning that they feed on a broad range of hosts, which increased the likelihood that they would establish in the communities.

Setting up this ambitious experiment was a massive logistical exercise. We literally applied New Zealand’s ‘no. 8 wire’ approach, using more than 1 km of the eponymous fencing material to support the herbivore exclusion cages, and 4 km of thread to sew them all together. The mesocosms contained 1,280 individual plants and were filled with more than 20,000 litres of soil. All of this work required a small army of helpers, including graduate and undergraduate students, support staff, and friends and family. The experiment simply wouldn’t have been possible without these wonderful people, who assisted with hand-sifting thousands of litres of soil to remove macroinvertebrates, designing a custom-built trailer for pasteurizing large volumes of soil, sewing and constructing herbivore cages, erecting posts and wire to hang the cages from, collecting and rearing insect herbivores, watering the mesocosm communities, and washing and weighing harvested plant material (including particularly prickly plants like thistle and gorse).

Plants were surveyed for herbivores and their damage on eight occasions throughout the one-year duration of the experiment, simply by counting the number of individuals of each herbivore species observed feeding on each plant. Sometimes these surveys could take up to three weeks to complete! We found it difficult to characterize feeding interactions through direct observation for some highly mobile or belowground herbivores. For these species, we sampled herbivore regurgitate (vomit) and frass (faeces), extracted DNA from the samples, and used a molecular technique named restriction fragment length polymorphism (RFLP) to identify the host plants from the plant DNA.

So, did our exotic plants escape from herbivores relative to their native neighbors? In fact, we found the opposite: exotic plants supported higher herbivore diversity and biomass, and received more damage, compared with natives. By comparing plant biomass between mesocosms where herbivores were added vs. excluded, we were also able to ask whether these differences in herbivore diversity and abundance translated to impacts on plant performance. Contrary to expectations based on the Enemy Release Hypothesis, exotic plant biomass was 30% lower in mesocosms where herbivores were added compared to those where they were excluded, whereas the biomass of native plants was unaffected.

Despite suffering such strong herbivory, exotic plants consistently dominated the biomass of mesocosm communities. One possible explanation for their dominance may be through their indirect interactions with neighboring plants. Many herbivore species that attacked the exotic plants were also shared with other species, indicating that polyphagous herbivores could potentially facilitate exotic plant success by mediating indirect impacts on the surrounding community. Although the accumulation of herbivores on exotic plants indicated the potential for strong indirect impacts on co-occurring plants, we found no evidence to suggest that this potential was realised through reduced biomass production. Another possible explanation is the faster growth rates of the exotic plants, which likely allowed them to overcome the high levels of herbivory they were subjected to. We are now looking at similar questions involving the interactions between plants and soil biota, where we might expect to find opposite effects of herbivores.

By assessing high taxonomic and functional diversity of plant-herbivore interactions (i.e., 39 plant and 20 herbivore species), quantifying multiple measures of enemy release (i.e., herbivore richness, biomass, damage and impact on plant biomass), and incorporating indirect interactions (i.e., plant-herbivore-plant) into enemy release theory, our study represents one of the most comprehensive tests of community enemy release and biotic resistance conducted to date. We conclude that polyphagous invertebrate herbivores are unlikely to play significant direct or indirect roles in mediating plant invasions, especially for fast-growing exotic plants. The full paper has now been published in Nature Communications, and can be found here. 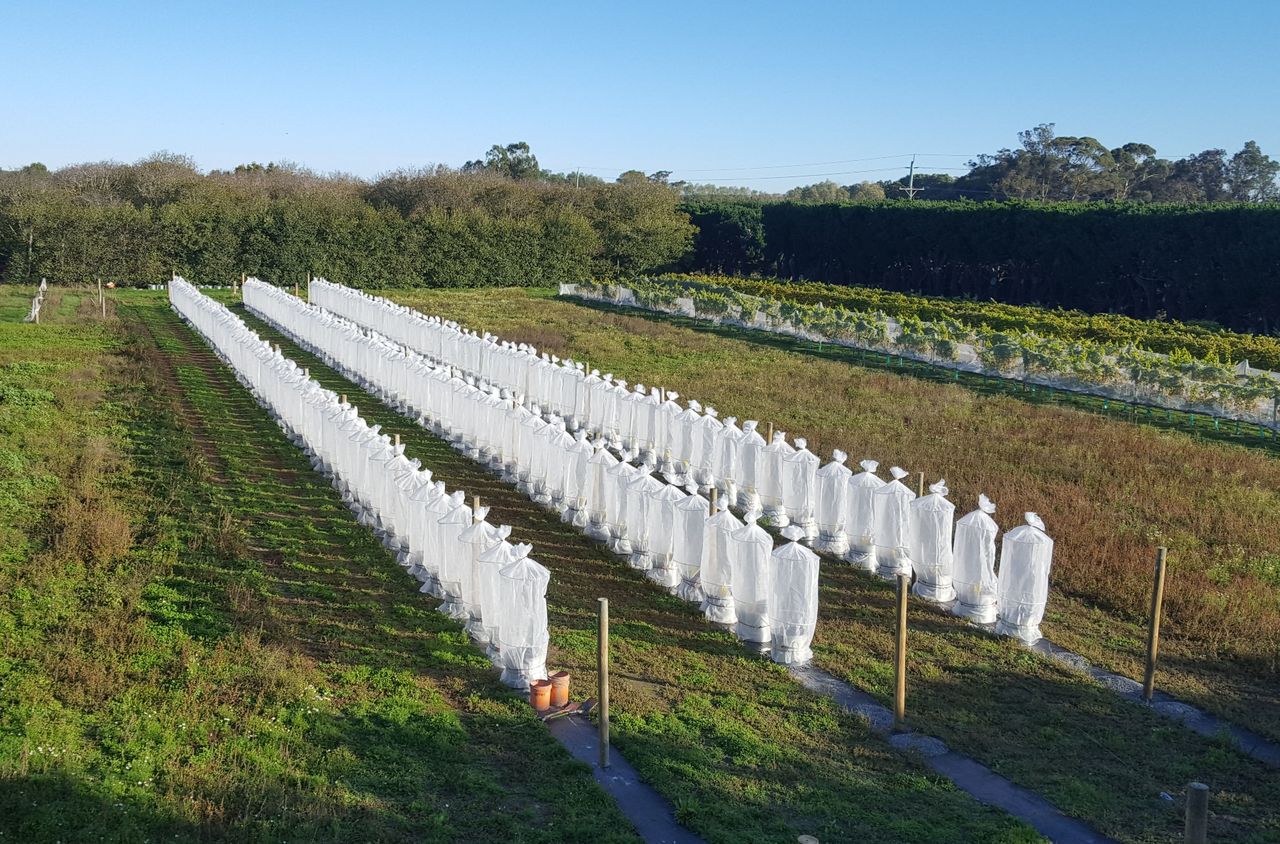 Invasion ecology has long held the view that exotic species can become successful through escaping from natural enemies. We challenge this belief through a large-scale mesocosm experiment showing that exotic plants dominate communities in which they occur despite accumulating and sharing herbivores.