What does make the human brain unique among primates and other mammals? This is an enduring question, fascinating generations paleoanthropologists and evolutionary biologists.
Gabriele Sansalone
PostDoc Fellow, IRBIM - Institute for Biological Resources and Marine Biotechnologies - Messina - Italy
Follow
Like Liked by Adolf Heschl and 1 other
0

Comparing the brain anatomy of fossil hominins and extant primates, the authors determine that strong covariation between different areas of the brain in Homo sapiens and Homo neanderthalensis evolved under higher evolutionary rates than in any other primate. Strong covariation is present in juvenil…

What, if anything, makes the human brain unique among primates and other mammals? This is an enduring question, fascinating generations of paleoanthropologists, evolutionary biologists and philosophers for centuries.

Based on comparisons of 3D digital brain models from monkeys, apes, and humans, (collectively called primates), scientists from University of New England (Australia), and the University of Naples Federico II (Italy) in collaboration with further Italian and American institutions, have shown that it’s not just our brains’ large size that make us human. Our big brains, are the result of a "Peter Pan syndrome", they never really grow up. Only one other related species shows signs of this same evolutionary phenomenon, the Neanderthals.

The scientists found that the brains of humans and Neanderthals evolved much faster than those of other primates and that the different regions or lobes of human and Neanderthal brains are highly coordinated during growth, whereas this condition is only met by immature individuals across other primate species. This may have played an important role in delivering our high intelligence and capacity for abstract thought. It also suggests that Neanderthals may have been more like us than we used to think.

Concepts underpinned by a "Peter Pan syndrome" gained interest within the field of evolutionary biology some half a century ago, when great scholars such as Stephen Gould, Ashley Montagu, and Lewis Wolpert championed the view that the human brain is, in fact, a juvenilized, always eager to learn version of the ordinary ape brain. Juvenilisation refers to the retention of immature traits through to sexual maturity or beyond, and is universally recognized as a potent evolutionary force. In the context of human evolution, although strongly criticized in the past, and variously dubbed a myth or a bankrupt concept, the Peter Pan syndrome is still widely acknowledged, although it remains extremely difficult to prove.

In a recent study published in the journal Nature Ecology & Evolution a team of Italian, Australian and US scientists picked up this hot issue, finding that in important respects the evolution and development of the human brain clearly demonstrates juvenilisation of the typical ape brain. In particular, the authors studied patterns of covariation (coordination of shape change) throughout growth among the brain’s different lobes.  Each lobe has been associated with different functions. But the authors wanted to determine whether change in any one lobe was associated with change in others.

They found that both apes and humans grow highly coordinated brains up to last developmental stage before sexual maturity, with change in the shape of lobes clearly correlating with change in others, especially between the parietal and frontal. These lobes are associated with reasoning and the integration of sensory inputs. However, as it enters the adult stage, the ape brain suddenly loses coordination between lobes, probably in favor of functional specialization of the different brain areas in response to the demands of adult life.

Humans though, were very different, with the high-coordination typically of juvenile ape brains retained well into adulthood. And there was more. The authors put to test the level of coordination among brain areas in a wide sample of primates (148 species including close fossil relatives of humans). They measured the rate of evolution in brain coordination in adult individuals and found that the branch of the primate tree that includes early human ancestors, such as Australopithecus and early Homo) showed a significantly higher evolutionary rate, and this rate accelerated rapidly as one moves from our old African ancestors to the Homo sapiens – Homo neanderthalensis pair.

“This suggests that brain coordination was a key factor in human evolution, prompted by natural selection. It seems likely that our recently lost cousins, the Neanderthals, probably had a powerful, highly coordinated brain like ours”, commented Gabriele Sansalone, the leading author of the study. Dr. Antonio Profico added that “the brains of Neanderthals and modern humans are very similar in terms of brain volume, although Neanderthals retain a distinctively archaic, elongated brain shape. The fact that Neanderthals and Homo sapiens retain high brain integration levels during adulthood is surprising, because until now we were acquainted with the idea that the emergence of modern human behavior was linked to the presence of a globular brain”.

The finding also lends support to the famous, yet hard to prove theory of the great British archaeologist Steven Mithen, who posited that humans possess a unique degree of cognitive fluidity, with a singular capacity to mix different domains of thought. “The human mind is especially creative, able to mix abstract thoughts generated in different domains of intelligence into new combinations which provide new and often unanticipated affordance and goals. We suggest that the high coordination between different brain areas identified in our study may be the mechanism underpinning Mithen’s cognitive fluidity hypothesis” commented Pasquale Raia, who was involved in the research.

Stephen Wroe, another author of the study notes that “further investigations should look directly into physical connections between the different brain regions in the development of the growing brain in humans and apes. Existing evidence, albeit limited, suggests that the wiring between different brain regions is especially well-developed in humans, compared to our monkey and ape relatives”.

Finding how much the ‘perpetual youth’ parabola made us the Faust of the animal kingdom, presents an exciting and promising future research agenda. 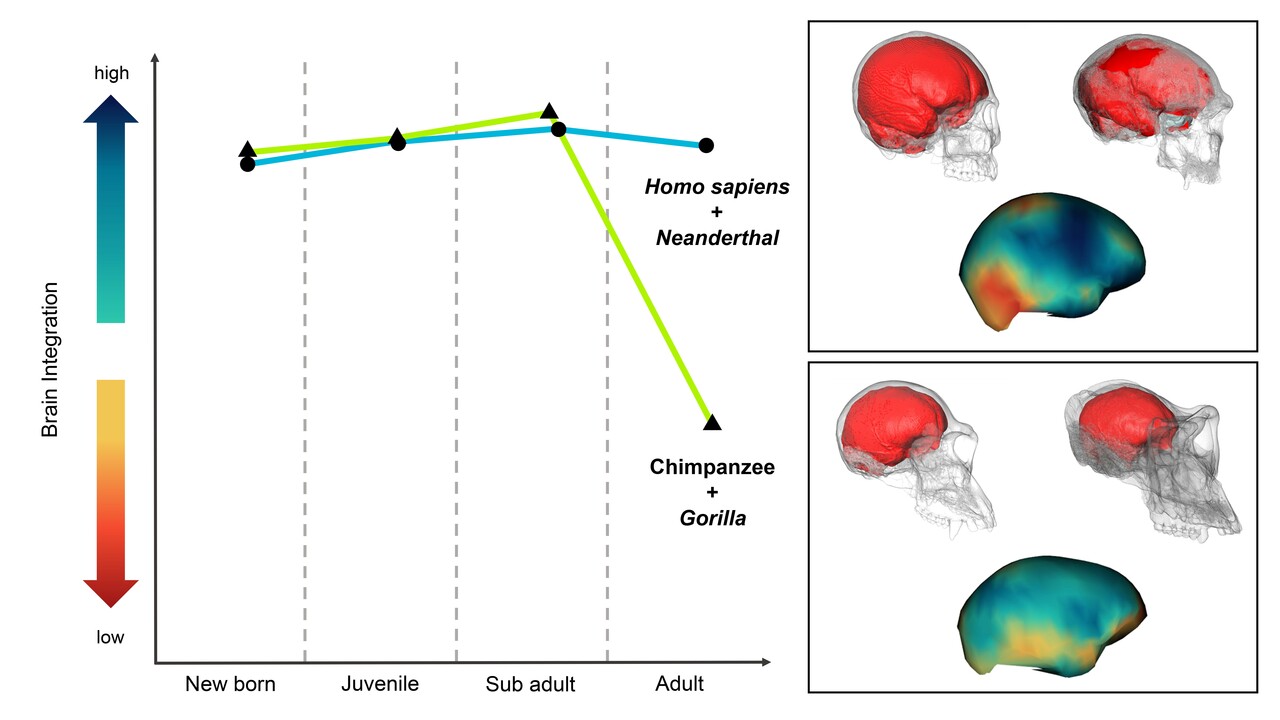 What does make the human brain unique among primates and other mammals? This is an enduring question, fascinating generations paleoanthropologists and evolutionary biologists.