A study in eastern Canada finds that forest-management strategies that lead to simplified forest structure and composition have resulted in loss of breeding habitat and associated population losses for many bird species.

I’ve planted roughly 360,000 trees in my lifetime. Most of these I put in the ground when I was between the ages of 19 and 21 – a phase in which I was paid <10 cents per planted tree in northern British Columbia, Ontario and New Brunswick, Canada. Believe it or not, I wasn’t motivated by altruism for the future of “nature-based climate solutions” at the time; I was an undergraduate student, keen to avoid the debt associated with paying tuition. That said, a small part of me likely did enjoy the moral high ground associated with playing a role in “restoring” Canadian forests following timber harvest.

Still, at around the 250,000th tree (I’m a slow learner) an incontrovertible fact occurred to me; I was mostly planting the same species…in rows…at nearly exactly the same spacing (Figure 1). These plantations didn’t look much like the mature native Acadian and boreal forests that stood at the edges of the clearcuts where I planted. In New Brunswick, mature forests were dominated by a diversity of tree species: sugar maple, American beech, red spruce, red maple, eastern white cedar, eastern hemlock, yellow birch, ironwood, basswood and silver maple. The trees I was planting in clearcuts tended to be black spruce, jack pine, and… well, that’s about it.

Around the same time, I was developing a keen interest in birds. I’d wander around, peering through my binoculars, and noticed that bird diversity and abundance tended to follow similar patterns to the forest; in locations with diverse, mixed forests with high structural diversity the bird community tended to be remarkably rich. In tree plantations, bird diversity was much lower. But at that time, there were few tools (conceptual or technological), and I had few skills, to test the effects of these forest changes on bird populations at broad, regional scales.

Fast forward to the current day and the availability of global-scale datasets on deforestation, regeneration, and recently even canopy height. But even these powerful datasets mask fine-scale changes that are happening in many forests of the world. For example, in my home province of New Brunswick, Global Forest Watch data suggest a region where “forest gain” is just as common as “forest loss” (Figure 2). The challenge lay in going beyond these categories (loss/gain) to test whether the forest changes I’d observed (and participated in) were affecting biodiversity on the ground.

So how do you go about quantifying whether forests have been degraded, and whether this degradation is affecting biodiversity? This is where species distribution modeling came in. For the past 15 years, our group at Oregon State University has been using remote sensing (usually air- or space-borne sensors) to quantify the habitat of individual species at a variety of scales. We’ve learned that species’ habitat can be quantified quite effectively from 705 km above the Earth’s surface (the height of NASA’s Landsat 7). Our species distribution models quantified what has been known for decades: (1) “habitat” can only be appropriately defined at the individual species level (few species define their habitats identically, and many have wildly different distributions in forests), (2) human-defined land-cover categories (e.g., “forest”, “urban”, even “deciduous forest”) are often poorly matched to such habitats.

Using this “species-centered” distribution modeling it becomes quite straightforward (with Google Earth Engine and savvy remote sensing friends like Zhiqiang Yang) to test the ideas I had as a young tree planter and birder.  Under the hypothesis that forests have become degraded in recent decades as a result of clearcutting and intensive forest management (e.g., single-species plantations), we should see declines in habitat for a range of bird species – particularly those associated with diverse mixed and older forest (which is usually the target of timber harvest). First, we used a large bird distribution dataset for the Maritime Provinces of eastern Canada to build species distribution models (SDMs) for 54 species of forest birds with Landsat reflectance bands used as predictor variables. Then we backcast these model predictions to make habitat maps of each species in every year since 1985.

Although we expected to observe habitat declines, the result of this backcasting exercise was alarming. Several species had lost more than 30% of their habitat over 35 years, with 66% of species showing a net loss in habitat over the time frame. Habitat declines were greatest for species associated with older forest, such as Blackburnian warbler (Figures 4 & 5) and golden-crowned kinglet. Remember: these habitat declines were happening over a period that little forest has been permanently lost in the region. Actually, forest cover has increased by about 6% since 1985. Our SDMs were telling us something that was invisible to previous quantifications of forest change, but visible from space; degradation (not deforestation) was driving severe declines in bird habitat.

Of course, any ecologist worth their salt would ask an important question: Are these habitat declines affecting population losses?  For instance, is it possible that either our models were poor and didn’t describe habitat properly? Or maybe birds can just crowd into remaining habitat with bird numbers staying roughly the same?

This is where long-term Breeding Bird Survey (BBS) data, and some hierarchical modeling came in (led by Brian Gerber at University of Rhode Island). BBS data has been collected across North America since the 1960s, and we had 90 such surveys along 40 km routes for the Maritime provinces. We could test whether routes with more habitat had higher bird abundances, and whether routes that lost habitat over a given period of time also lost birds. The results were striking; modeled habitat predicted bird abundance for most (94%) of the 54 species. Not only has habitat been lost, but this is causing substantial population declines in forest birds. Worse still, some of these population declines are sufficiently rapid to warrant “Threatened” status according to Canada’s Committee on the Status of Endangered Wildlife in Canada (COSEWIC).

So what’s next? Is this one of those doom and gloom “chronicle nature’s decline” sort of stories that makes us all feel like binging episodes of Parks and Rec on Netflix? Not necessarily. There are moves afoot in both New Brunswick and Nova Scotia to enact major policy reform to slow or halt forest degradation due to intensive forest management. Protected areas are likely to increase substantially in both provinces. But this won’t entirely solve the problem; you can only formally protect so much, and many communities in these Canadian provinces depend on the forest industry for their livelihoods. If biodiversity conservation is a societal goal, we still require policies that prevent wholesale conversion of native, mature forest into plantations or intensively thinned forests. We will need widespread adoption of harvest practices that retain old forest canopy, biological legacies, and tree species diversity (i.e., ecological forestry approaches).

Are plantations always bad for biodiversity? It isn’t quite so simple; if planned in appropriate locations (e.g., restored former agricultural areas, clearcuts that were formerly plantation) plantations have the capacity to grow wood quickly to fill global demand, thereby increasing the feasibility of establishing formal protected areas and ecological forestry in natural, diverse forests. Growing wood in the temperate zone also has the potential to take the timber production pressure off highly biodiverse tropical forests.

What are the implications of our findings for regions beyond eastern Canada? Given that the total area of plantations and intensive forest management is increasing worldwide, and that plantations may be increasingly relied upon to satisfy “nature-based climate solutions” globally, it will be critical to examine the impact of these practices at broader scales. Do other areas in North America with rapid forest loss, then forest gain (see Figure 2) also exhibit forest degradation and reductions in biodiversity, or is this most apparent in the Acadian forest? What about Scandinavian and Brazilian forests where intensive management is common? We encourage others to more closely examine the role of forest degradation, not just deforestation, as a driver of biodiversity loss worldwide. We need solutions that balance providing wood for human communities with the conservation of the roughly 4 million species that inhabit forest systems. 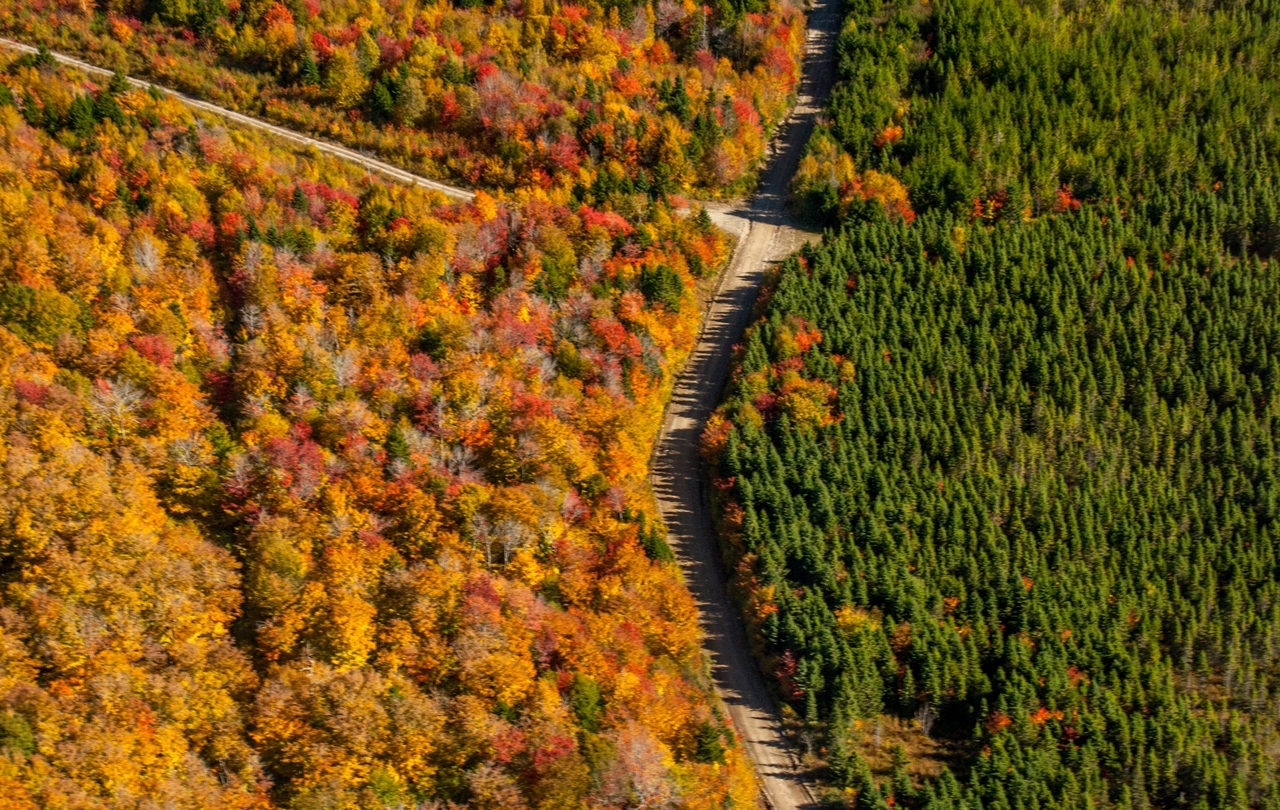