Nestled into the canopied highlands of southwestern Honduras, the El Gigante rock shelter appears in landscape photos as an inky crevice overlooking a slope. Its deep, dry interior, a refuge to many a group of humans passing through over the last 11,000 years, came to preserve their tools, fabrics, and foods in accumulating layers of dirt.

Among the buried artifacts, surprisingly modern-looking maize corn cob fossils – some as old as 4,300 years old – have much to reveal about the history of the land and its Indigenous peoples. Driven by domesticates like maize, the rise of food production transformed the Americas, ultimately leading to the emergence of complex political economies like the Aztec, Inca, and Maya civilizations – mirroring developments in the rest of the world.

Over the last two decades, new techniques to recover DNA from ancient human skeletal remains and decrypt the encoded DNA sequence have led to major discoveries in human population history, including the journey into the Americas of some of its first peoples. Ancient DNA studies on fossil crops from sites like El Gigante are now beginning to complement those on fossil humans by revealing a rich, connected sociocultural history of the Indigenous peoples of the Americas.

There and back again

The wild grass teosinte, found in valleys across Mesoamerica, was recognized as a food by Indigenous hunter-gatherers living in southwestern Mexico more than 9,000 years ago. Soon, they had moved past gathering and were growing the crop themselves, beginning the long, winding road of its domestication into maize – a present-day global staple.

Domesticated crops and animals arise through generations of selective breeding of initially wild varieties by humans. The typical domesticated crop is nutritious, palatable, and easy to harvest for feeding many. But as modern food crops like maize were essentially all domesticated thousands of years ago, many aspects of the process of domestication – including how long it takes and how it proceeds in early stages – remain incompletely understood.

Crop fossils can provide snapshots of the domestication process while it was happening, especially if their DNA has been preserved. As the genomes of modern domesticated crops have come to differ in several key genes from their wild relatives, it is possible to compare fossil genomes to modern ones and ask how far along the path to domestication they had gotten.

The genomes of maize dating to about 5,300 years ago in Mexico’s Tehuacán Valley suggest that the crop was only partially domesticated at the time. Maize may have been going through a prolonged period of domestication in Mesoamerica.

But in a recent twist, Logan Kistler, an archaeogeneticist at the Smithsonian Institute, led an ancient DNA study1 on maize from the El Gigante rock shelter and found that they bore genetic gifts from beyond Mesoamerica.

The preservation of DNA in fossils depends on climate, age, and other factors. Even when found, ancient DNA is rarely in pristine condition – carrying signs of damage and degradation amassed over the years – and must be extracted in special labs designed to reduce contamination from the environment. Kistler and the team were unable to extract DNA from bits of the 4,300-year-old maize cobs but had more success with other cobs dated to about 2,000 years ago that resembled the older cobs in size and other observed features.

Inspection of the genomes of these ancient maize samples showed that, in keeping with the modern appearance of the cobs, they seem to have been completely domesticated. In addition, the genomes show signs of gene flow from South American maize lineages.

An earlier study, also led by Kistler, had uncovered a deep history of cultivation and improvement of maize in South America following multiple waves of introduction from Mesoamerica. These new findings suggest that maize was reintroduced into Mesoamerica from South America, possibly after acquiring more selected traits that contributed to its further success as a crop. Reintroduction had occurred by 2,000 years ago, and perhaps even by as early as 4,300 years ago if the shared features with the older cobs reflect genetic affinity.

The genomic history of maize reveals a diffuse network of Indigenous farmers across Central and South America, connected by trade or migration and skilled in crop breeding and improvement. Another recent ancient DNA study on a different Indigenous crop of the Americas took a closer look at some of the outcomes of ancient breeding practices.

Somewhat picky, not too finicky

Modern genetic variation in the common bean points to two independent domestications in Mesoamerica and the Andes, both about 8,000 years ago based on fossil beans discovered in the regions – no DNA from these, lamentably. Historical records and our modern-day diets indicate that like maize, the common bean conquered the world following European contact.

A recent study2 reported successful recovery of DNA from common bean fossils originally collected from archaeological sites across the Argentinian Andes, as well as modern wild and domesticated beans. Using the oldest and youngest of the ancient samples– about 2,500 and 600 years old, respectively – as anchors, the authors examined ancient and recent selection in the beans relative to wild populations.

Much of what separates the genomes of domesticated common beans from wild relatives appears to have been already present by about 2,500 years ago, including changes in genes possibly contributing to sweetness in taste. This points to an ancient domestication consistent with archaeological evidence. But a look at genetic diversity in the ancient beans revealed something more unexpected, at least to evolutionary biologists.

When humans select a few plants from the wild and start breeding them, they probably sample a small portion of the diversity of traits and underlying genetic variants that is present in wild populations. The initial contraction in population size – often described as a domestication bottleneck – is thus expected by researchers to lead to lower levels of genetic diversity in domesticates compared to wild relatives.

The authors of the common bean study found that the ancient beans harbored genetic diversity as high as their wild relatives and higher than in modern domesticated beans. This finding possibly has major implications for our understanding of the domestication process, says Michael Purugganan, an evolutionary biologist who studies cereal crop and fruit tree domestication at New York University, and who was not involved in this study.

“The idea of a severe bottleneck that accompanied domestication may be something we need to rethink,” Purugganan said. He noted that a similar observation had first been made in 2019 in an ancient DNA study on sorghum from Robin Allaby’s group in the University of Warwick, which drew skepticism (as evident from Twitter discourse at the time) from the community, including Purugganan.

“I am still not completely convinced that this idea of domestication bottlenecks should be rejected,” said Purugganan. “But I am beginning to be a little more open-minded about it, because now we're seeing more examples.”

The iconic modern sunflower with its beaming countenance on a single large disk has a global footprint. Archaeologists contend that Indigenous peoples living in the Mississippi river valleys in eastern North America had domesticated it from a weedy, branching plant with numerous small disks by about 4,000 years ago, growing it primarily for its edible seeds.

As readers may now reasonably expect, dead sunflowers preserved in dry environments – similar to the maize cobs in El Gigante – have been mined for ancient DNA to explore the domestication history of the sunflower. A 2019 study3 on ancient sunflower remains excavated in eastern North America – alongside more recent samples – had genetic tales to tell.

Here, the authors did not delve into the plants’ chromosomal DNA and instead looked at the more abundant DNA from chloroplasts and mitochondria, which are both only passed down maternally. While less informative on domestication history than chromosomal DNA, the organelle genomes still allowed them to track changes in genetic diversity through time.

The excavated sunflowers – between 3,100 and 800 years old – and historic samples collected from Indigenous farmers about a hundred years ago contained genetic variation in their organelle genomes that has been lost in modern varieties. As in the common bean, this indicates that more intensive selective breeding during recent crop improvement has led to loss of genetic diversity. But unlike the ancient common beans, the ancient and historic sunflowers do show signs of a sustained domestication bottleneck over the last 3,000 years in their reduced genetic diversity compared to wild relatives.

Maize, common bean, and sunflower first became food crops across three separate centers of domestication in the Americas, which collectively saw the domestication of many more crops as well as a few animals. Over millennia, these centers – and possibly others in South America – came to be connected through networks of human movement and exchange. This is perhaps best demonstrated in maize’s travels through Central and South America, eventually making it to eastern North America, adapting to the temperate climate, and largely replacing Indigenous crops there.

Ancient DNA studies on Indigenous domesticates allow us to peer into the early history of agriculture in the Americas, whose inventions feature in our diets today in the form of squash, tomato, chocolate, and many other foods in addition to maize, common bean, and sunflower. Michael Purugganan further emphasized that such studies also enrich our understanding of how critically important processes like domestication and crop evolution proceed.

“I do believe that our understanding of domestication has really expanded over the last 10 or 15 years,” Purugganan said. “And it's these kinds of studies that are really pushing it forward even more.” 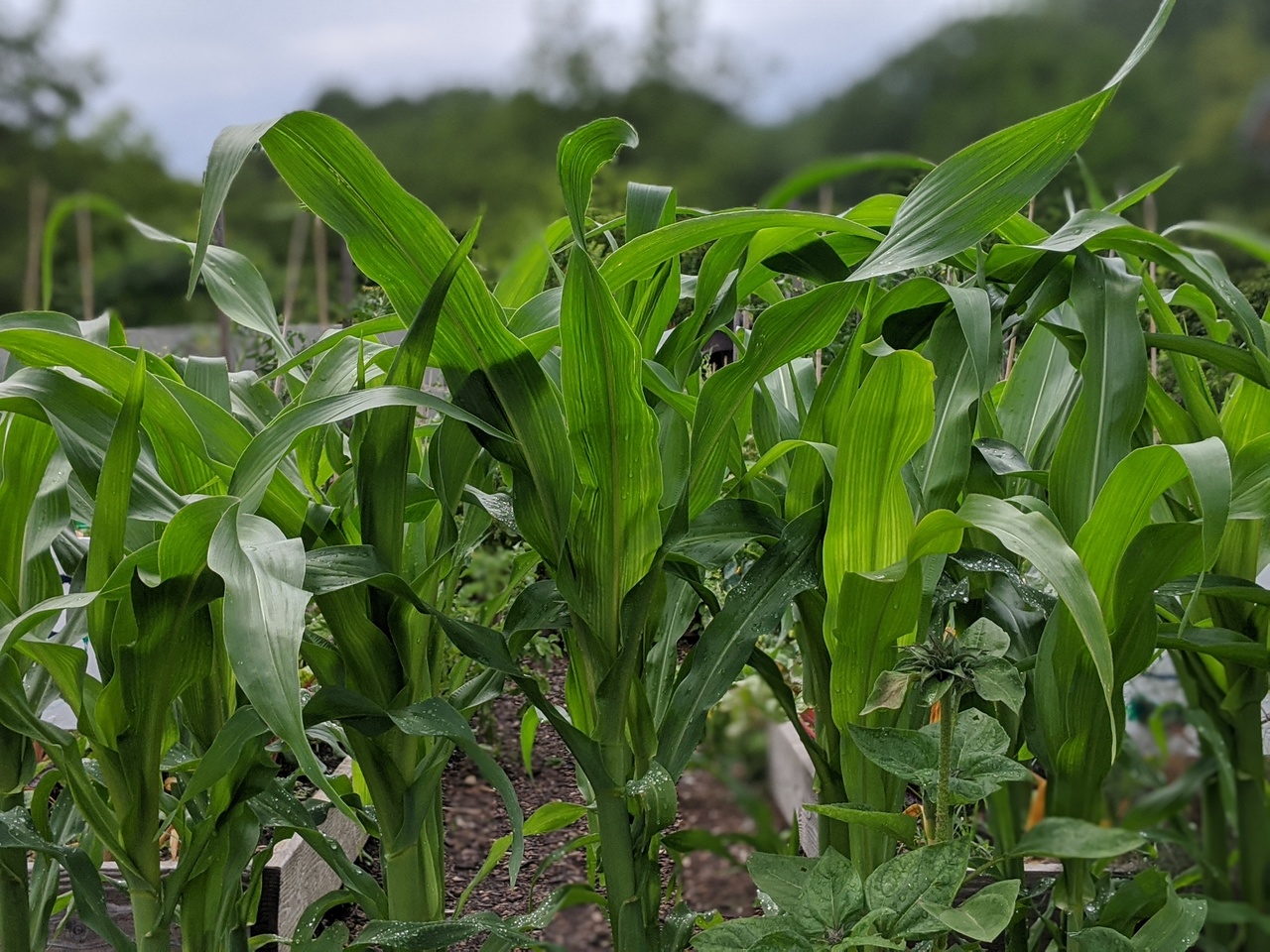