Adaptive radiations represent spectacular bursts of diversification. Analysing genomic data from across the Alpine whitefish radiation we were able to identify the genomic architecture of key ecological variation and highlight the possible role of hybridisation in facilitating adaptive radiation.
Rishi De-Kayne
Postdoctoral Researcher, University of Edinburgh
Follow
Like Liked by Evelina Satkevic and 2 others
0

In this genomic study on Alpine whitefish radiations, the authors reveal details on the genetic architecture underlying the repeated eco-morphological diversification and the role of hybridization in the evolution of endemic whitefish species.

Adaptive radiations evolve through the, often rapid, adaptation of a lineage to many different ecological niches, and represent some of the most diverse clades on Earth. The adaptive radiation process often results in remarkable phenotypic variation within a clade, with well-studied examples of adaptive radiations, such as Darwin’s finches (where different species have variation in beak shape and size) or African cichlid fishes (with spectacular colour variation across the many species), making up some of the most iconic systems in evolutionary biology. Despite the process of adaptive radiation being geographically and taxonomically widespread, the mechanism by which a single lineage can diversify so dramatically, and why others may not diversify at all, is still poorly understood.

As a result, the study of historically less well studied ‘non-model’ adaptive radiations may help us understand the factors that drive and facilitate diversification as well as those which may, in contrast, hinder diversification. In our paper we investigated one such radiation, that of the Alpine whitefish, a clade of (mostly) lacustrine salmonid species which are widespread across Europe, where they exhibit striking ecological variation. This variation in ecology between whitefish species means that different whitefish species within the same lake have very different phenotypic characteristics, with different species varying in their body size and shape, diet and feeding apparatus morphology, and their spawning behaviour (where and when they lay their eggs in the lake). In addition to this substantial phenotypic variation, the Alpine whitefish radiation lends itself to the study of adaptive radiations because of the prevalence of evolutionary replication across the radiation, with ecologically similar species (ecomorphs) present in multiple lake systems. Evolutionary replicates like these can be particularly valuable for investigating whether diversification has occurred in the same way multiple times and in general whether evolution proceeds in a predictable way. We aimed to study the genomic basis of adaptive radiation in Alpine whitefish by sampling whitefish from across their Swiss range, where up to 30 species are thought to have evolved in the last 15,000 years, and using genomic approaches to understand how this diversity of Alpine whitefish may have evolved.

Has ecological diversification occurred within each lake independently?

Using our genomic dataset from 99 whitefish sampled across five pre-Alpine lake systems (and some non-Swiss fish used as outgroups) we were able to construct a phylogenetic tree showing the most likely pattern of diversification between these species. We found that ecologically different whitefish species within each lake system appear more closely related to each other than ecologically similar species from different lake systems. This phylogenetic signal, where ecologically distinct species from the same lake systems cluster together (an example of this pattern for only two ecomorphs can be seen in Figure 1) confirms the results of previous studies and suggests that diversification occurred following the colonisation of each lake (as opposed to ecomorphs diverging first and then colonising lakes which would produce a phylogenetic tree where ecologically similar species cluster with one another; Figure 1)

Do we find evidence of gene flow between lakes?

Although ecologically similar whitefish are found in multiple lake systems (including the ‘Balchen’, ‘Felchen’, and ‘Albeli’ ecomorphs) there are a number of ecomorphs which are much less widespread. These include species which feed and spawn in the pelagic areas of the lake (the ‘large-pelagic’ ecomorph) as well as very deep spawning profundal species (the 'pelagic profundal' and 'benthic profundal' ecomorphs). In other adaptive radiations it has been suggested that phenotypic variation and ecological novelty may stem from hybridisation between phenotypically divergent species. To identify whether this may underpin the evolution of less widespread ecomorphs in whitefish we quantified the degree of excess allele sharing between all species in our dataset. Excess allele sharing was observed both within and between lakes. Interestingly, and in support of previous studies in other systems, excess allele sharing between lakes was particularly prevalent when considering less widespread ecomorphs. One of the most striking implications from this analysis is that our data supports previous hypotheses that the ‘large-pelagic’ species in both Lake Lucerne and Lake Thun may have originated in Lake Constance. Both of these species genomically resembled the Lake Constance species, as highlighted by our phylogenetic tree (in the case of the Lake Thun ‘large-pelagic’ species), and in our excess allele sharing analysis (in the case of the Lake Lucerne ‘large-pelagic’).

What is the genetic basis of key ecological variation?

One of the most important axes of phenotypic variation in whitefish is gill-raker variation which, being tightly linked to their diet, underpins the spatial distribution of whitefish within lakes. Understanding the genetic architecture of traits is important to better understand the evolutionary processes which may have interacted to produce the phenotypic variation that we see today. To identify the genetic basis of gill-raker count we carried out a genome-wide-association study, which identifies allelic variation that is strongly associated with gill-raker count variation across our full dataset (Figure 2). We found one especially strong significant association in the gene edar, which is known to be associated with gill-raker development in other fish species (Figure 2).

Our study shows that ecological and phenotypic variation across the Alpine whitefish radiation is associated with a mixed genetic architecture, where both specific large-effect genes (including edar) and genome-wide allelic variation both contribute to the evolution of phenotypically divergent species. We also highlight the prevalence of within and between-lake introgression and the possible role this may have played in the evolution and maintenance of ecologically distinct whitefish species. 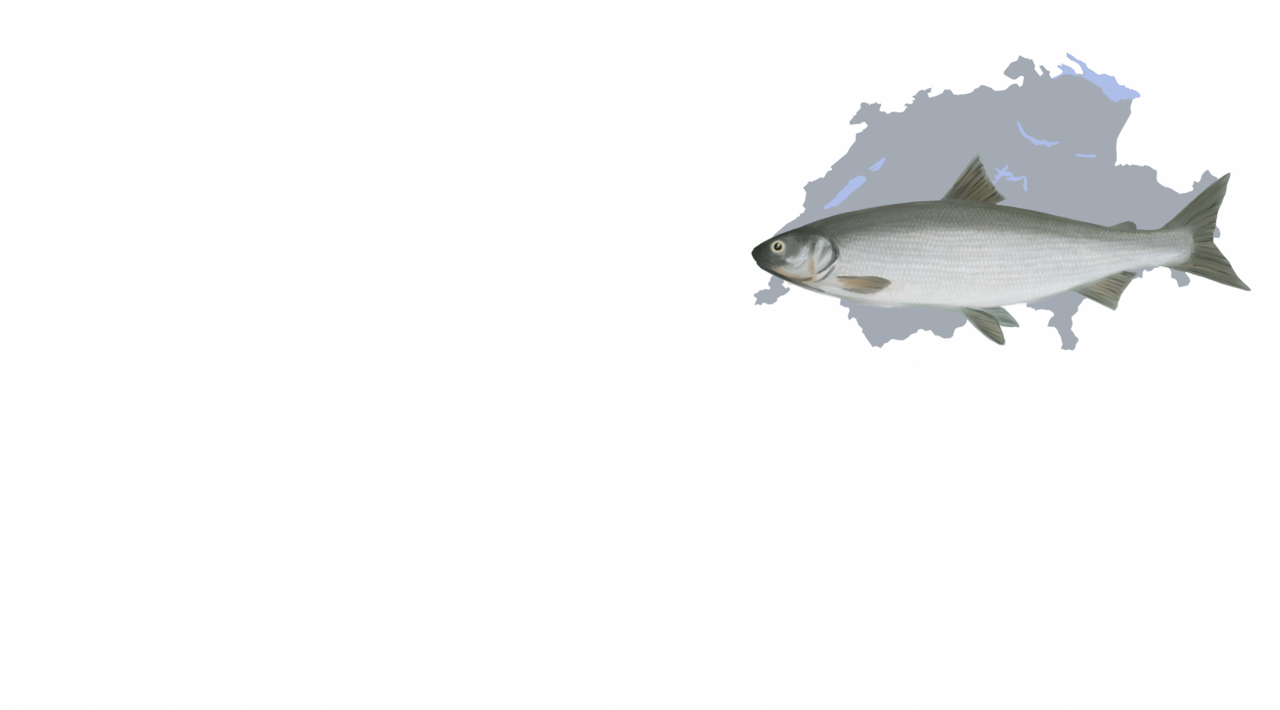 Adaptive radiations represent spectacular bursts of diversification. Analysing genomic data from across the Alpine whitefish radiation we were able to identify the genomic architecture of key ecological variation and highlight the possible role of hybridisation in facilitating adaptive radiation.